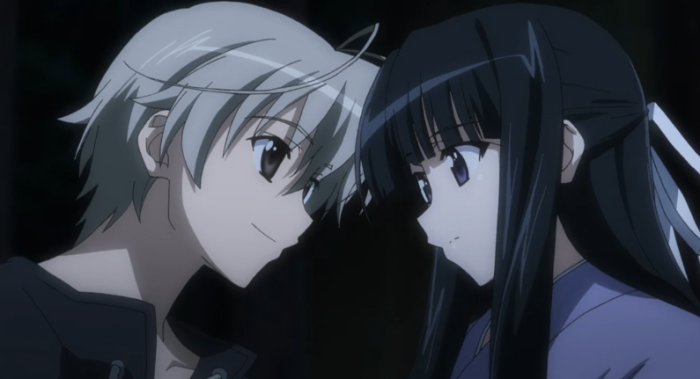 Plot: Haruka develops a relationship with Kazuha while trying to help her with her relationship to Akira and her problems with her father.

Obviously, one of the worst offenses this series is making is trying to cram four visual novel routes in 13 episodes, minus three technically because those are meant to provide foundations for the actual routes, so ten episodes. Each route has two episodes to play with (except Sora, who gets three….) so, of course, that means every relationship develops at a breakneck speed.

That being said, the relationship between Haru and Kazuha is pretty good. He’s very supportive of her without being pushy. He helps her get through some major hurdles in her life and backs off when she clearly needs space. Likewise, while Kazuha does does try to keep Haru at arm’s length, she obviously can’t do it for very long and eventually gives in to her feelings.

She’s not overly preoccupied with Haru in this arc, either, as she spends a lot of time doting over Akira to the point where she even proclaims that all she wants to do is dedicate her life to Akira, making Akira question if she loves her romantically, so obligatory (incest again…) yuri kiss~~ She rejects Akira, though, even though it wasn’t really Akira hitting on her so much as pushing her to admit she loves Haru, which she wouldn’t do because she felt that would be betraying Akira….It makes more sense in context.

I do have to say, for being the prim and proper ‘princess’ of the harem, she dives a bit too hard into the heavy physical stuff too quickly. Her first kiss with Haru is a full makeout session, and the next time they show physical affection outside of hand holding, they’re having sex on her bed immediately after a festival. They get into the ‘I love yous’ really quickly too because it feels like Haru’s known Kazuha all of maybe a month.

Also, I think he’s too forward when he puts his hand on Kazuha’s (clothed) breast when they take pictures at the fair. I’m quite certain that’s literally their first date. It was also pretty random. Like, hey, funny pictures, whee, Immagropeyanow, say cheese!

Edit: It was brought to my attention that Kazuha was probably touching her own chest here (feeling her heartbeat) and I agree. The art of the hand and the way they’re positioned gave off the suggestion that he was doing it. Sorry for the confusion.

At this point, at least by normal anime standards, they might be dating and holding hands regularly, possibly kissing on the regular, but not saying “I love you” and having sex.

As for the story itself, it’s also pretty good. I think Kazuha has way too much of a personal guilt complex, and it’s a bit unbelievable that Akira never told Kazuha that she was happy the way she was and that she actually had a much better relationship with her father than Kazuha knew about, but it’s not that bad.

In addition, they leave plenty of Akira’s story open, despite the two being so closely intertwined, so Akira’s arc will have plenty to go over.

Oh and in case you’re wondering about Sora’s role here, she mostly does what she’s been doing this whole time, which is standing around doing nothing and really only being a reaction shot. She has one kinda nice conversation with Akira about how Haru and Kazuha are similar in their desire to help other people before thinking of themselves. Thank god she’s actually conversing with other characters, and she….kinda….ish gives advice….ish…stuff to Haru about Kazuha? But not really. She mostly just points out that his gift of a birthday cake on Kazuha’s birthday is too predictable.

Also, we’re shown a shot where she’s fiddling with a cross necklace. I really hope they don’t slap us in the face with religion when we get to the incest. I got enough of that with Boku wa Imouto ni Koi wo Suru.

If this arc had more elbow room and incorporated Akira’s story into it without also including her romance arc and included more of their father, this arc would be perfectly fine as the main plot of the show.