Plot: Momoko wishes more than anything to find the love of her life and have a beautiful wedding like her late mother once had. One day, as she’s out with her friends Yuri and Higagiku, a strange man named Pluie kidnaps her and tries to steal her beloved ruby ring, which once belonged to her mother. Another man, an angelic being named Limone, rushes in to save her. Pluie possesses her friends into attacking her for her ring. Limone hands her a brooch, which gives her the power to transform into the magical girl Wedding Peach and save her friends.

This one, however, I’ve seen on more than one occasion be accused of being one of, if not the worst clone offender in existence. That’s a hefty charge. But let’s weigh Wedding Peach on both its own merits and its clone status before we send it to anime jail.

….And hoo boy, they don’t waste any time do they? This theme song is so similar to Sailor Moon’s, I’m almost tempted to go ‘she is the one named Sailor Moon’ during the chorus. Just add some organ music, bells and tweak the verses a tad and you have Wedding Peach’s OP.

Alright, I’m jumping the gun. It’s probably just a coincidence. Give the rest of the episode a chance.

Wow……Okay. Let’s just get everything out of the way.

Our main character, Momoko, is a klutzy, ditsy, gluttonous airhead who is obsessed with love and boys. She has a particular obsession with getting married because, well, of course she does. She’s a female protagonist in a magical girl anime.

Her friends have a nickname for her when she’s being airheaded or dumb – turtle, which is also a name stemmed from her hair style. Her hair makes it seem like she has a shell on her back. Usagi was nicknamed bun-head/dumpling-head/meatball-head due to the round buns in her hair.

Their names are themed, which can be taken as ripping off Sailor Moon, but is a thing in most magical girl shows. Momoko’s name means ‘peach tree child’, with her last name, Hanasaki, meaning ‘to bloom’ Her friend, Yuri’s name means ‘lily’ and her other friend, Hinagiku’s, name translates to ‘daisy’.

Momoko’s hair is styled in reference to her name (peach shaped), like Usagi has her trademark rabbit ear style. And, like Usagi’s, her hair is also insanely large.

Momoko is a princess. It hasn’t been explored yet, but she is. She’s princess of the Angel World and a descendant of Aphrodite.

Her love interest, Yousuke Fuuma, hates her at first, and the feeling is mutual, is secretly another sexy bishounen character named Viento (Wind), and their eventual blooming love is one that was met with disapproval due to their being from different worlds (he’s half demon, she’s half angel. In Sailor Moon, Serenity was princess of the moon and Endymion was prince of the earth kingdom.) Being fair, his character seems to be a legit enemy. Since he’s an enemy, we obviously need someone else filling the Tuxedo Mask role (unless they pulled a Tokyo Mew Mew on us) and that person is Limone, whose name means Lemon in Italian. He’s, shockingly, not Momoko’s love interest in disguise, but he is Yuri’s. Being fair, his human form, Yanagiba, is lusted after by nearly every girl in school, especially our three main leads.

Their main powers are love based and the devils whom they fight hate love.

Her transformation brooch could not be more late-Sailor Moon-esque if you tried – most particularly the Crisis Moon Compact, though Eternal Moon Article and Prism Heart Compact work just as well.

And you’ll never guess what’s inside of it…..a silver crystal! They’re not even trying to hide how blatant this is.

I will, however, vent slightly about something that makes no sense here. Angels and demons – that’s the premise we’re working with. So why, pray tell, do the transformation sequences result in wedding dresses? Why is she called Wedding Peach? What do weddings have to do with any of this besides love being a central theme? Closest I can gather from what Pluie (Rain) said is that the dresses make them look like angels sorta kinda a little I guess. The devils must be based on divorce lawyers.

And you might be saying to yourself ‘Wow, I thought sailor uniforms were hard to fight in. A wedding dress? Are you nuts?!’ Yes, this is incredibly impractical, even moreso that usual. That’s why you don’t really see her move in it. Don’t worry, though, this outfit isn’t her main love angel uniform. There’s a fighting version of the outfit…..Why transform into this clunky disaster if they have a fighting uniform? Because the fighting uniforms don’t look wedding-y enough. 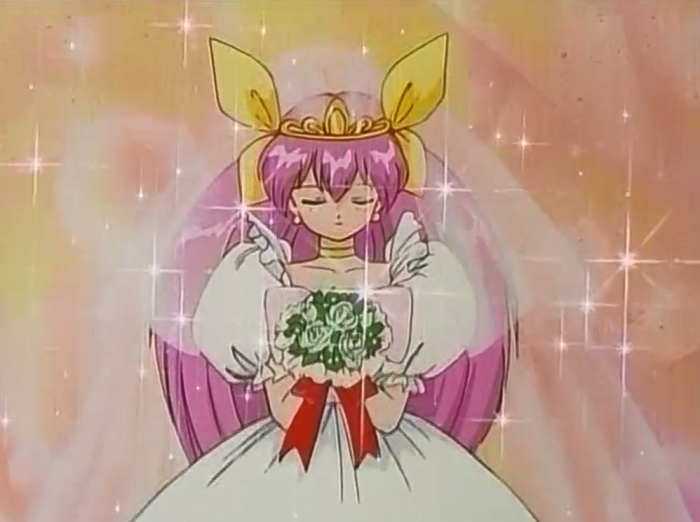 Of course, she gets a post-transformation speech and her own pose, but, again, this is common in magical girl shows.

Enough clone-age, though. How does this episode fare on its own merits?

Our lead character, Momoko, has a dream of finding her one true love and getting married with a lavish wedding because her deceased mom did…..Okay.

Her two friends, Yuri and Hinagiku whose personalities seem so interchangeable at this point that I still have difficulty remembering who was who, gush over a star soccer player named Yanagiba, fight over who will get to be with him, have an angry encounter with another soccer player named Yousuke Fuuma as they try to interview Yanagiba for the school paper, eat crepes, then Momoko gets kidnapped by Pluie, who demands her mother’s wedding ring. What significance the ring holds is not revealed in this episode.

She’s suddenly saved by an angel named Limone who starts swordfighting Pluie. As Momoko goes to tend to her friends, having been knocked out by Pluie, he possesses them both with tiny demons called Jama-P.

Limone gives her the brooch and the god of love herself, Aphrodite, tells Momoko what to do in order to save her friends. She transforms into her wedding dress, making her Wedding Peach, and she expels the Jama-P through her power, Lovely Operation Tempete. If you think that’s a stupid name, the items that give the girls their powers are called the Saint Something Four. That sounds stupid, but, believe it or not, it has a reason to sound so sloppy.

The items are based on the ‘Something…’ superstition in weddings. In order to bring the bride and groom good luck on their wedding day, a bride needs something old, something new, something borrowed and something blue. Each trinket is meant to represent one of those items.

Even with the explanation, which isn’t given in this episode, by the way, I still think the name sounds silly.

We get an overly long ‘remember you’re my friends’ clip show for having only known these characters for 18 minutes, especially since a few of those minutes were dedicated to the three of them fighting over a guy. One of them even said the line ‘When it comes to love, women’s friendship is a fragile thing.’

Pluie leaves and Limone bids farewell. Momoko passes out, and Yuri and Hinagiku don’t remember anything. In typical anime fashion, they brush it off as a dream when Momoko tries to explain what happened. But the brooch in her pocket gives her proof that it was true.

As a first episode, this works very well, though I really wish they had focused more on highlighting at least some differences between Yuri and Hinagiku. Yuri’s supposedly the quiet, polite and kind one while Hinagiku is the rougher tomboy, but they only slightly hint at this. I had to go to the Wiki to really iron that out.

It’s really just your average magical girl fare down to its core. Like many magical girl shows, the changes mostly lie in the aesthetics. I have yet to read a damn thing about this show that makes me go ‘Wow, that’s unique.’ Even taking the magical girl tropes away, it’s just blah.

There are a staggering amount of similarities to Sailor Moon, and I definitely expect more to come. For instance, the enemy bishounen also seem to be themed in their names much in the same vein as The Four Heavenly Kings. Viento, who is Yousuke, means ‘wind’ while Pluie means ‘rain’. I’m stretching a bit for that because, again, Tokyo Mew Mew and some other shows also theme names fairly commonly. All they’re missing is a cute animal sidekick and a Beryl ripoff….and that’s coming.

It’s just….distracting. But is it too distracting? Mm…that’s yet to be seen.

The art and animation are par for the course for the mid nineties. I’ll at least say that didn’t remind me much of Sailor Moon, mostly just because it’s basic anime style. But what is up with Higagiku’s hair? Bright green with a weird toothpaste blob in the back? What? The animation isn’t bad. In fact….I’d actually say it’s better than the early day Sailor Moon episodes.

The music is forgettable, though fitting. It’s somewhat dated, but outside of the complete ripoff that is the OP, it’s not very reminiscent of Sailor Moon’s.

Next episode, the intro to Fighter Angel mode.