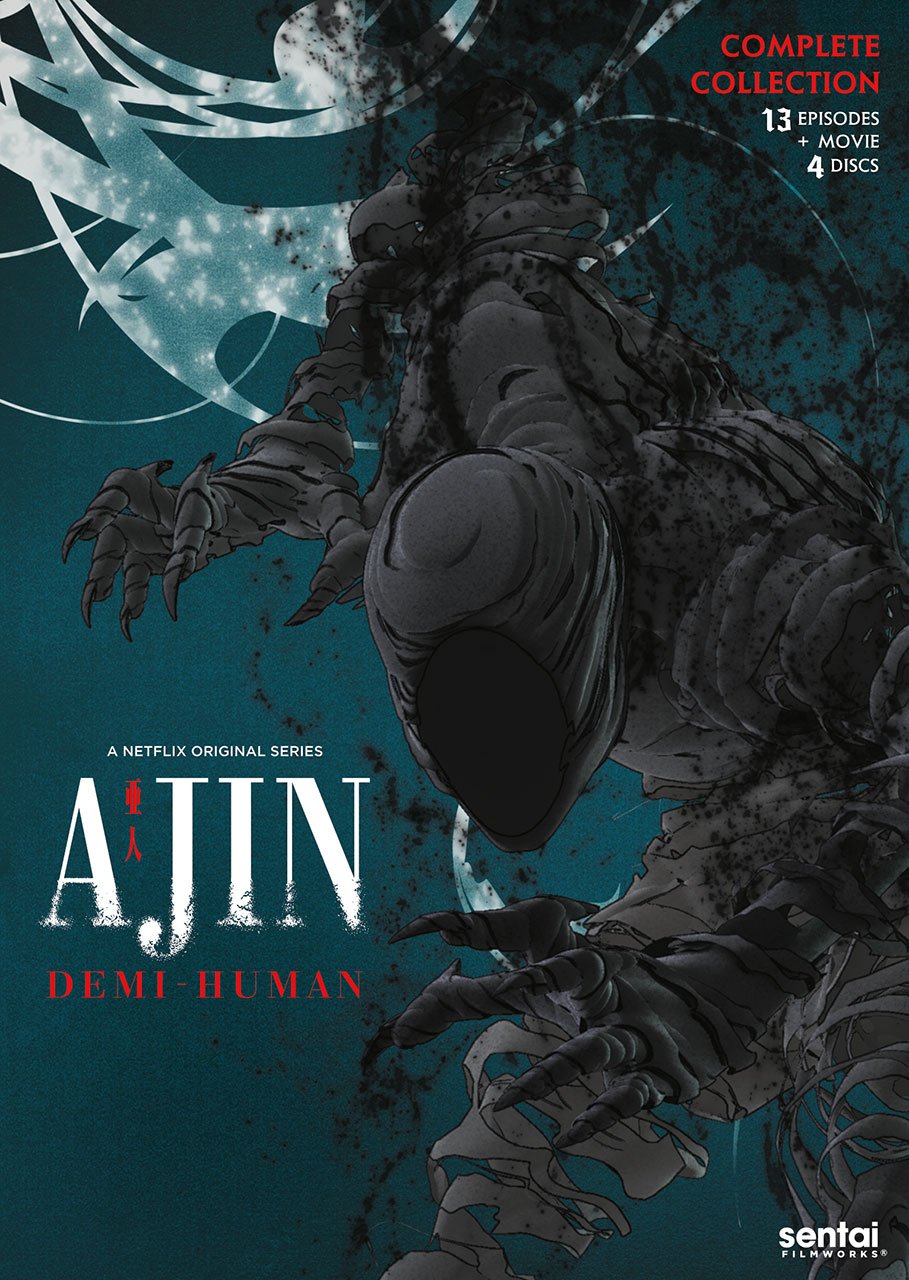 Plot: Seventeen years ago, humanity discovered the existence of ajin; seemingly immortal beings with other superhuman abilities. Only two have been discovered so far, but interest in the ajin remains extremely high.

Kei Nagai, however, only wants to focus on being a ‘fine human.’ He wants to rid himself of frivolity and study hard to become a doctor. He’s even given up his old best friend, Kai, to achieve it.

Distracted while walking in the street, Kei is suddenly hit by a truck. Everyone watching instantly believes he’s dead. No one could survive a hit like that. Well….no one except…

Breakdown: Ajin: Demi-Human is a title I’ve heard of, but never really learned much about.

The show has a talent at capturing your attention. From the first scene, you’re sucked in by the ajin as one lone ajin takes out an army of people with ease, even taking RPG shots head-on without issue.

Then we shift to present day and our main protagonist, Kei, who is really hard to like or relate with. He has a very odd manner of speaking (Who says their main goal in life is to be a ‘fine human’?) doesn’t ever smile and is a big stick in the mud. Even when he’s a kid, he’s talks like a serial killer who’s too cynical for his age.

He has a flashback to his sister, Eriko, crying over a dead puppy and Kei basically shrugs it off and says “He was sick, so he died. It can’t be helped. Though, what’s the point of dying? Might as well not die.” He’s like six in this flashback, by the way. Not like his mom is much better. She called the puppy ‘defective’ and is the one who told Kei to dump Kai as a friend if he wants to be a ‘fine human.’

Kei gets a little better near the end because he actually sucks up his pride and contacts Kai for help, and he shows determination to not ever be caught by anyone, but he was trying my patience for a while.

Eriko is in the hospital for unknown reasons and seemingly hates him now. She’s unpleasant.

The only one here who seems likable is Kai, who, despite being dumped as a friend, still goes out of his way and risks his life and future to help Kei in the end.

I don’t think I’m really spoiling anything to mention that Kei’s an ajin. He discovers this out of the blue when he gets hit by the truck. Now everyone and their brother are chasing him down.

I say this isn’t really a spoiler because the episode makes is really obvious that Kei’s an ajin even without him getting hurt or nearly killed. His focus on being a ‘fine human’, his inability to ignore news about ajin even when he flatout says he should ignore it because it has nothing to do with his studying, his suggestion that ajin are still humans despite their abilities, showing sympathy for them etc.

I’m a bit concerned that the show might lose tension with this. Immortal characters are, by default, typically boring because you’re never concerned for their welfare. Why would you? They can’t die.

So if you’re not really worried about their safety, you either have to worry about the safety of other characters, of which the only ones I’m really concerned over are Kai and maybe Eriko, or you have to make the immortal character more interesting.

As a first episode, it did introduce us to the world and characters fairly well, and it kept itself grounded enough to maintain a true sense of realism even with immortal beings as the forefront of the plot.

The art and animation are fully 3D CGI, and I have a real problem getting accustomed to that style. It works pretty well here. I don’t feel like I’m watching a half-hour long video game cutscene or anything, but I find myself being pulled out of immersion every so often when I notice the art and animation.

The music is really good so far, even if the background animations for the ED were really depressing. We just keep seeing silhouettes of people killing themselves in various ways.

While I am a little wary here as I’m concerned this will be an endless diatribe as to why humans suck, which wears on my psyche as episodes go on, I am looking forward to where this story will go.

Recommended Audience: While there wasn’t a whole lot of graphic stuff in this episode, mostly just a couple of people getting shot and Kei getting hit by the truck, neither of which was very notable, THEM Anime Reviews warns that this should be NC-17 due to the intense amounts of gore they’ll presumably have later on, particularly when experimenting on the demi-humans. I can’t make that determination yet, so I’ll just say 16+