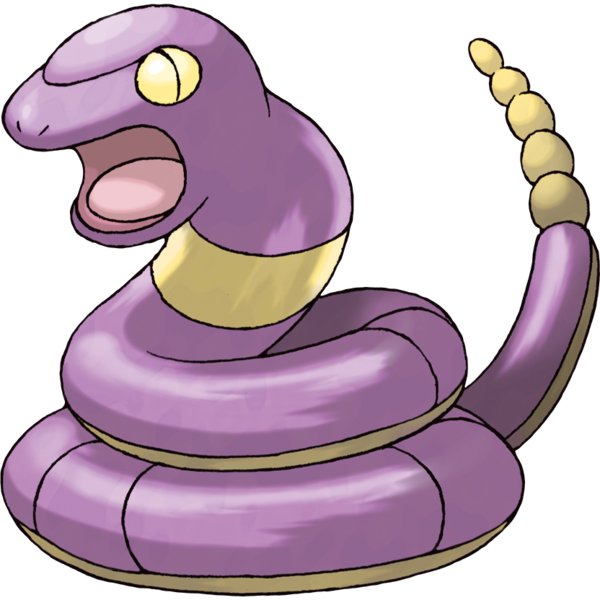 Name: Ekans is merely ‘snake’ spelled backwards, which seems kinda lazy, but I actually really like it. Not only is it snappy and memorable, but the ‘s’ at the end makes it sound really snake-like when Ekans says its name. Ekanssssssss.

Its Japanese name is Arbo, which is mean to be an anagram of ‘boa’….but I can’t figure out where the r is coming from. And, yes, it is also strange that Arbo is so very close to Arbok but seemingly has no connection. *shrug*

Design: Ekan’s design is very simple, it’s pretty much just an average snake design, but they do plenty with it to make it stand out and be pretty cool. First of all, major points for the purple. Considering purple is my favorite color, you’ll probably hear me say that for any Poison type Pokemon, but this shade is particularly nice. I also love how they break it up with bright stripes of yellow. That is very much in keeping with snakes having bright color patterns a lot of the time, and it makes it unique.

I also really like its eyes, and I think it’s kinda adorable that it doesn’t have teeth.

In the realm of sprites, Gen I is okay. R/B is awkward because they made Ekans really thin and made its head a bit too big.

Gen II is fine, but I can’t help but think Crystal’s animation is making him vomit.

Gen III is also fine, but the animation for Emerald is way too goofy. Why are they making him stretch so much?

Gen IV is, again, fine, but they still keep making goofy animations for it. These are the best ones so far, but it’s still weird. I get that they’re probably going for a biting/lunging motion, but it just looks off.

Gen V is really good. This one is constantly animated and, even though it’s just swaying back and forth, it’s the best animation for it yet.

The rest of the Gens are average looking.

Ewwwwwwwwwwwwwwwwwwwww. Ekans shiny has always been and continues to be one of my absolute least favorite shinies. It’s some disgusting combo of urine yellow, puke green and just a hint of brown. I don’t know who approved this shiny design, but ew.

I think Ekans is one of those Pokemon that could’ve made off with a pallet swap shiny. Bright yellow with purple stripes would’ve worked. I don’t much care for most yellow shinies, but it would’ve been a better idea than whatever this is.

Cry/Voice: I love Ekans’ voice, even though, if you hear it for long enough IE, if it has a main role in an episode, like the Island of Giant Pokemon, it gets grating fast. Like I mentioned, though, the ‘s’ at the end makes for a good snake-ish sound when held.

Ekans’ game cry is great. It’s low-pitched and foreboding yet has a rumble to it like a rattle (Rattlesnake!)

Dex Entries and Backstory: We never get an anime Dex entry for Ekans, and that rustles my jimmies.

Other than that, its Dex entries are rather basic. It’s literally nothing that doesn’t describe most snakes. It eats bird eggs, it can unhinge its jaw, and it doesn’t have any poison (Venom…) when it is first born, so its bites are painful, but harmless.

One entry that did tickle my funny bone was X’s and Let’s Go Pikachu/Eevee that explains…..Ekans grows longer as it ages…..

Are you telling me that living beings get bigger as they grow up!? You are the most useful Pokedex in Pokemon history.

In terms of design, Ekans is based off of a boa and a rattlesnake with some ring-necked snake and Indian cobra mixed in. It’s also noted that, due to the signature move of Ekans and Arbok being Glare, that it was also partially based on a basilisk, a mythological serpent that could kill people with its glare. 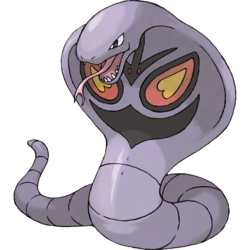 Name: Keeping in the same backwards word theme as Ekans, Arbok is Kobra spelled backwards….What?…..K is cooler than C, alright?

I really like Arbok as a name. It’s even snappier than Ekans, and I love how, in the anime, the inflection on the name when said by the Pokemon sounds just as snake-like as Ekans does on the ‘s.’ They even add a ‘cha’ sound to the start sometimes to make it more audibly snake-like (Akin to the sound of it striking, and in the case of some cobras, spitting!)

Also, I still have no interesting name facts here because almost every instance of Arbok outside of English just calls it Arbok…..except Mandarin and Cantonese Chinese….which, for some reason, add the character for ‘freak’ at the end of it….Rude.

Design: I absolutely adore the design of Arbok. It’s simple, yes, and just as basic as Ekans at it’s core, but the added cobra hood, the cool designs on the inside of the hood, the much larger size and really well-designed head make this a fantastic design. And, of course, major points for the purple with the colors on the hood breaking it up.

In terms of sprites, the only note I have about Gen I is the weird addition of stripes to the hood when seen from the back. I have no clue why those were deemed necessary, and I’m glad they got rid of them in subsequent games.

In Gen II, Crystal has a really awesome animation.

Nothing really of note in Gen III onward.

I feel really weird saying this after so many instances of me ragging on similarly colored shinies, but I actually really like Arbok’s shiny. I think this shade of yellow brings about more of a gold/bronze vibe than it does….puke or urine. Plus, I really love the tiny bits of blue in there. It breaks it up just as much as the yellow and red do on the original design, and I adore that shade of blue.

If I had a major criticism there, it’d be that Gen II’s shiny is way off the mark. It’s like a moldy green color mixed with purple.

Cry/Voice: I love Arbok’s voice, and unlike Ekans’ it doesn’t get grating after a while. Like I mentioned in the name section, when spoken, the voice actor makes a sound kinda like a spitting cobra going ‘CHAAABOK!’ It sounds close enough to the actual name to sound Pokemon-ish without just sounding like a dude doing a Pokemon voice.

Its game cry is good and threatening, but there’s no snake-like vibe to it, and it sounds a bit too much like a spaceship crashing on an Atari 2600.

Dex Entries and Backstory: Like Ekans, Arbok has never had an in-anime Dex entry, which is bunk (I’m still angry Ash never bothered Dexing Arbok and Weezing when they debuted…) but, at the very least, it got one in the manga, Pokemon Adventures.

Many of Arbok’s Dex entries talk about the markings on its belly, which vary from region to region, and supposedly there are only six confirmed patterns in Gen I, however, this has been updated in Gen VI to 20 patterns……BUT then it goes and contradicts itself. In Ultra Sun, they say they updated the amount to 20, but in Let’s Go Pikachu and Eevee, it reverts back to six.

Believe it or not, they actually make good on this claim – Arbok does indeed have slightly different markings based on the region in which it’s found. That’s pretty cool.

Arbok uses the patterns on its chest/belly to intimidate foes before trying to poison or crush them. Arbok’s crushing ability is so powerful that it can easily crush steel drums, and it’s said you will never get away if it has you in its grasp.

While this isn’t mentioned in the Dex entries, the Wiki page notes that it’s possible for Arbok to regrow any part of its body if its cut off. Noted from the anime, it can detect vibrations and spend a lot of time underwater.

In terms of design, Arbok is based on an Indian Cobra, and the note about the possible connection to a basilisk that Ekans had is included in Arbok’s.

Next up, the prodigal Pokemon itself, Pikachu gets covered as I go over the entire ‘chu line (Pichu included, despite going in numerical order.)