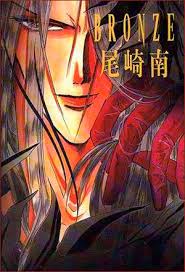 Plot: Nanjo Koji is one of the most popular singers in Japan. Takuto Izumi is a rising soccer star in his school. When Koji was in fifth grade, he saw a brief glimpse of a boy playing soccer and was instantly captivated by his gaze. Now 16 years old, he finds himself face to face with the young soccer player he saw way back when. He was was kind enough to nurse him back to health after finding him passed out on the sidewalk. Koji soon falls head over heels for Izumi, though he resists these feelings since Izumi does not appear to feel the same, and their professional lives threaten to tear them apart either way.

Let’s enter the world of yaoi, shall we?

It’s weird how yaoi seems to be off in its own little world. You know it’s anime, it still follows many anime tropes, but it just feels like most of it is its own….melodramatic soap-operaish thing. And if there was ever a good example of that, it’d be Zetsuai 1989 (Desperate Love)

First of all, let’s go over the obligatory yaoi tropes here, since they’re also a separate category of their own.

And no, I’m not kidding on the injury/illness tally.

– Koji is passed out in the street at the start. Develops a bad cold.

– Izumi catches his cold, passes out on a bridge.

– He tries to play soccer while sick; passes out at soccer game. Finds out he has pneumonia.

– Koji gets hit by a car and breaks his arm.

– Koji passes out in the rain in the soccer field because (enter reason here).

– Koji gets accidentally stabbed by a falling piece of glass.

Technically it could go as high as eight because Izumi kinda injures his leg in a soccer game and Koji’s face gets cut when Izumi throws a vase at him.

Oh and by the way, this all happens in a 45 minute runtime. It’s just that melodramatic.

This story is….something. It’s actually pretty creepy. I have to wonder how many stories I’ve read or watched that were supposed to be romantic but ended up being creepy.

Koji is completely hung up on Izumi just because he likes how he looks when he’s all intense and focused. That’s pretty much it. That’s the only reason he loves him so much.

Izumi’s an asshole who goes to great lengths to push people away due to his *pokes bingo card* tragic backstory™. So there’s not really much to fall in love with. He’s kind enough to care for Koji when he saw him passed out on the sidewalk (no idea why he didn’t call an ambulance or something. Yeah, just take any drunk (Koji was indeed passed out because he was drunk; he got sick because he was passed out in the rain) you find on the street and bring him home. Oh and make sure you leave him there while you head to work. He’s too hot to steal your things or kill you when you get back.) But other than that he’s an angry jackass who is constantly blowing up at people.

Izumi may warm up a bit to Koji as time goes on, but he really only gets to a point of tolerating him since Koji keeps wedging his way into his life, uninvited and unwelcome. Koji is also negatively affecting his life since everyone in the media is spreading rumors about them and Izumi’s younger sister.

He especially dislikes that Koji keeps picking at the scab that is his obligatory tragic backstory™. When Izumi was a kid, his mother killed his father because she loved him too much or something. She also attacked and nearly killed Izumi, leaving him with a literal scar on his hip and a figurative scar on his heart (see, I can be melodramatic too).

The story is that there is no story. Basically, Koji keeps butting into Izumi’s life, annoying him and sometimes protecting/caring for him. Koji realizes he’s falling in love with Izumi. When he has Izumi alone in his apartment, full in the knowledge that Izumi will soon be going away to pursue a professional soccer career in Italy, he decides to try to rape him.

But when Izumi fights back, he pulls out a big shard of glass from a window Izumi broke that ended up embedding itself into Koji’s back. Brandishing the glass, he tells Izumi that, if he stays alive, he’ll find Izumi wherever he goes, and if Izumi leaves him, he’ll kill him. So he hands him the shard of glass and tells Izumi to kill him before Koji kills him instead.

Because, wow, what the fuck?

First of all, Koji, could you be a little creepier? I should mention that we know absolutely nothing about Koji’s past, so why he’s such a creepy little obsessive murderous/suicidal wackjob is beyond me.

Second, Koji dear, maybe try explaining your feelings to Izumi and try to work things out instead of jumping to attempted rape and requested assisted-suicide? You’re a damn pop star. You travel all the time and are probably rich. Why is him moving away, temporarily or permanently, such a huge unavoidable issue?

Third, are you seriously asking a guy who is obviously still traumatized beyond belief at his tragic backstory™ that instead of having the balls to kill yourself…..yourself, you decide to put a huge shard of glass in his hands and tell him to stab you to death? What is wrong with you?

And how does it end? Izumi has a flashback that we’ve already seen of his mother killing his father and attacking him, then Izumi yells at him for making him think about that. Koji breaks down and says if he won’t kill him he’ll commit some ambiguous horrible atrocity to him, and then we fade to Koji alone kinda implying that he either raped Izumi or killed him (Izumi is nowhere to be seen), then he cries tears of blood and says he can never achieve true happiness. Now no one can stop him, not even himself.

Again, what the fuck?

What does any of that mean? Did he let Izumi go? Did he rape him? Did he kill him? Is he now going to go on a rampage to kill Izumi because he left him?

This whole OVA is just weird, creepy and unpleasant. It’s definitely not romantic or all that interesting for that matter.

But of course it spawned two sequels because yaoi fangirls were really hard up for some fanservice back in 1989.

Sneak peek; I’ve already seen Bronze: Zetsuai Since 1989 and it is miles more melodramatic than this drivel, if you can believe that. Also, spoilers, in the sequel, Izumi’s fine, seemingly not raped or murdered, they’re kinda in a relationship, and Koji is not hell-bent on killing Izumi or dying. So this whole ending seems pointless or retconned.

And don’t even get me started on the high school film project that is Bronze: Cathexis.

Art and Animation: Another addition I should’ve made to the Yaoi Trope Bingo card is pointy, long awkward art and terrible animation. I swear, Koji looks he spent his youth on the rack. His fingers are as long as strands of spaghetti, his eyes are like mail slots, his legs and ass don’t even look like they belong on the same body as his torso. It’s a mess. Izumi is only slightly better, and everyone else just looks lazily done.

Being a romance, this show already doesn’t have much movement, but even then the animation is obviously cheap, which pains me to say because this was done by Madhouse.

Music: Some of it’s alright, but for the most part it’s forgettable and bland. Which is weird because Koji’s a singer and actually sings some of his songs in the OVA.

Voice Acting: Japanese: Ranges from blah to melodramatic, but the latter is probably how they were directed.

Bottom Line: Even if you’re hard up for yaoi, just skip this one. There is really nothing here for anyone; not in story, not in characters, not even in fanservice. It is unbelievably cheesy and overly dramatic, and the romance isn’t even so much a romance as a frightening obsession, and I’m disgusted that this eventually becomes a legitimate coupling. Creepy, unhealthy relationships played off as ‘true love’ is, sadly, still a thing in romance titles even now, but it’s disappointing that these situations are especially common in yaoi and yuri. I think it’s getting better, but the process is very slow.

Additional Information and Notes: Zetsuai 1989 was based on a manga of the same name written by Minami Osaki. It was directed by Takuji Endo, who also directed three episodes of Paranoia Agent (?!) Phantom Quest Corp. and Stitch! The music was done by Kenji Kawai, and, wow, I think I might be stepping on toes calling the music here bland, because he has a rather impressive resume including the first two Ghost in the Shell movies, Ranma ½ and Fate/Stay Night….It was animated by Madhouse, and it’s never been licensed in the US.

Recommended Audience: Attempted rape, mentions of murder, moderate levels of blood, no nudity, the actual sexual activity is rather low; they barely kiss. 13+