There’s only so long she has to worry about this, however, because she’s soon reminded that Valentine’s Day is coming up, so she plans to make Aoyama some chocolate.

Problem is…she doesn’t know how to make chocolate. And she’s not exactly a world-renowned chef either.

Ichigo’s mood plummets as a result, believing she doesn’t have it in her to make decent chocolate for Aoyama. Akasaka reassures her that it’s the effort, love and care that she puts into the chocolate that truly matters, not how it tastes or how fancy it is.

Reinvigorated by Akasaka’s words, Ichigo invites Aoyama out next Sunday and gives it her all to make Aoyama the best chocolates she can make.

She finishes her chocolates for Aoyama and heads off to meet him when she’s interrupted by Kisshu. But there’s something odd about him this time. His eyes are glowing, his skin is turning purple and weird, and he’s demanding Ichigo go with him no matter what.

His face suddenly softens as Ichigo continues to struggle. He’s offering her a chance to go to a world where just the two of them can live in peace forever. She vehemently refuses and proclaims that Aoyama is the only one for her.

Realizing his efforts are in vain, Kisshu brandishes his sai and attacks her. She tries to transform, but he knocks her pendant away and grabs it. He goes for the killing blow, but is interrupted by Aoyama. Kisshu is about to angrily blast Aoyama away, but Ichigo deflects the blast. Still, Aoyama gets injured in the explosion.

Suddenly, Aoyama starts glowing a bright blue color. He stands and transforms, revealing himself to be The Blue Knight.

Ichigo is shocked by this turn of events, but it doesn’t matter to Kisshu who continues to try to kill Aoyama/The Blue Knight anyway. Despite The Blue Knight being a tad slower due to his injury, he is still able to defeat Kisshu.

Unwilling to stand down, however, he creates another energy blast that The Blue Knight gets caught up in. The other Mews arrive to help, but Shirogane tells them to stand down. The fully-crazed Kisshu proclaims that if he can’t have Ichigo with him, he’ll die with her here, but not before killing The Blue Knight first.

Ichigo tries to stop Kisshu, but to no avail. She does, however, manage to knock her pendant away from him. She grabs it and, just as Kisshu tries to deliver a fatal energy blast to The Blue Knight, Ichigo jumps in the way.

As the dust settles, Kisshu believes he accidentally killed Ichigo, but they find that she transformed in the nick of time and shielded both her and The Blue Knight from the blast.

With tears in her eyes, she begs Kisshu to not kill the one most important to her and she again tells him that she simply can’t go with him. As a sad smile comes across Kisshu’s face, he drops his sai and concedes. He bids Ichigo farewell before heading off alone.

Some time later, Ichigo and a de-knighted Aoyama sit on a bench to talk about what just happened. She gives him her Valentine’s chocolates, which got damaged in the battle, and vows to love him forever and ever.

– Did I just see Ichigo’s parents whispering to each other about sex? Pretty sure that’s what just happened there.

– That sparkly/glowy effect in Ichigo’s eyes was very well done. 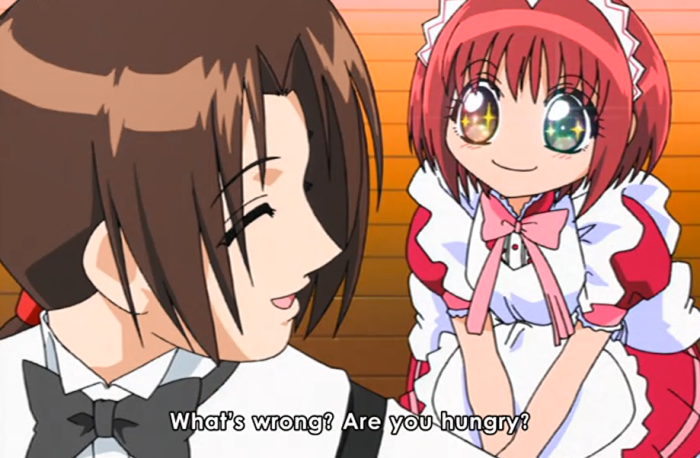 – Akasaka didn’t really teach her to make chocolate so much as give her a book that tells her how to do it while he stood there quietly washing dishes.

– I love that Pudding’s still visibly affected by the toxic chocolate even minutes after the fact.

– Aw, Lettuce wants to make chocolate for Shirogane……I am in perpetual pain that this pairing basically evaporates whenever it’s brought up.

– Oh my god, Kisshu’s expression after the second explosion. Well, they did want to convey that he’s off his rocker and….boy that expression will do it.

Overall, while they did have a massive tone shift between the first and second halves, this was a pretty great episode. The identity of The Blue Knight being revealed was a bit overdue, in my opinion, seeing as how we only have a handful of episodes left, but the battle and subsequent reveal were good.

Seeing Kisshu go full psycho was both entertaining and very sad. I mean….he’s still a psycho who has done a lot of terrible things over the past 45 episodes, but you still feel for him.

I didn’t like that the other girls were relegated to being background decorations again, however. They literally transformed for nothing and stood there just because Ichigo and Aoyama needed their moment.

That being said, as you can tell by my lack of notes, I don’t really have anything negative to say about this episode beyond that. Even if it’s only for a short time, I’ve been looking forward to Aoyama actually joining the team. And now we’ll get to see his (Albeit very short) transformation sequence.

Next time, Aoyama officially joins the Mews, and he’ll have to prove his worth as a new team member immediately when there’s another suspected Mew Aqua detection nearby.