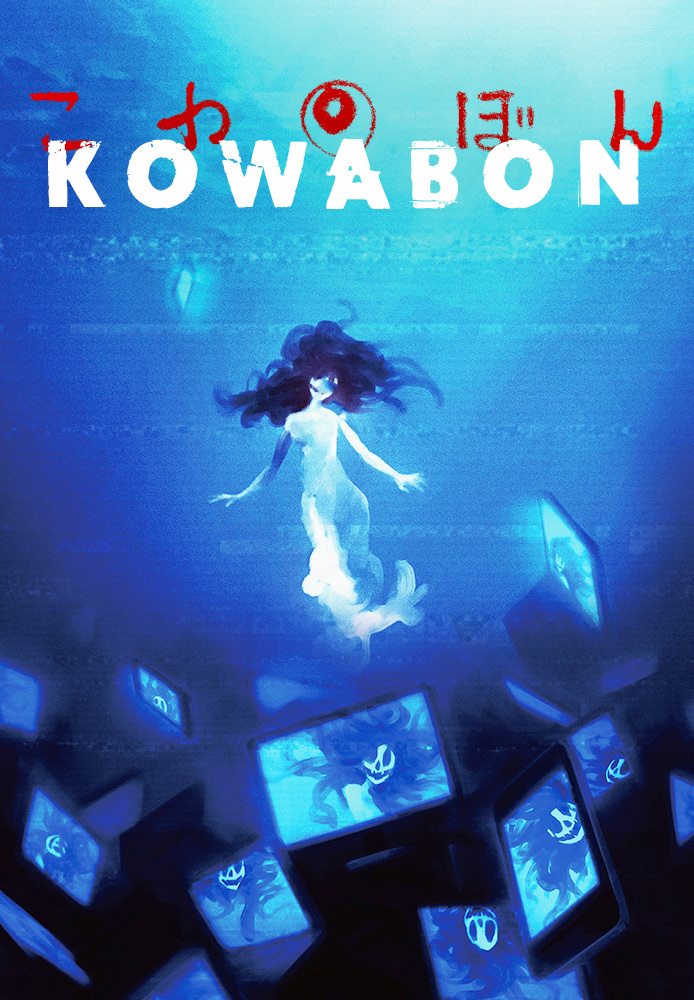 Plot: An episodic series of horror shorts animated with a cel-shaded rotoscoping technique.

Breakdown: Being the sucker for short horror stories that I am, I decided to look up similar series to Yami Shibai and came upon Kowabon.

And even though I didn’t really dislike it, I can’t say it’s really all that good either.

Kowabon is animated using rotoscoping, which is a technique that is, has been and will likely always be controversial and seen as a lazy form of animating. Rotoscoping involves filming live actors like you would with any film then tracing over the footage frame by frame to make the animation. It has been used since practically the dawn of animation and even though it’s not as common today (MoCap is basically its successor), it still gets used.

I’ve always been of two minds when it comes to rotoscoping. On one hand, I can definitely see the argument that it’s lazy given that it is literal tracing, but on the other hand you still have to have a good deal of artistic talent to truly make it work without making it look janky or uncanny valley.

The art style they use to go with the rotoscoping is alright. It’s cel-shaded with thick lineart, which allows it to feel more strongly like an anime, but it also maintains the exact actors’ faces, which contributes to the added feeling of realism. I wouldn’t say it’s entirely unique, but it’s uncommon and definitely works in this series’ favor.

It’s a bit difficult to talk about Kowabon outside of that because there are no real stories or characters. I wanted to check out Kowabon because it was another series of really really short episodes, and considering Animating Halloween was coming up I thought it’d make for some great episode-by-episode reviews to help fill up the month, but I didn’t quite realize how much of a hindrance that short run time would be. Their episodes are even shorter than Yami Shibai, clocking in at barely three minutes and that’s with an ending theme song and credits.

Still, it wouldn’t be impossible for me to review each episode on its own….if there were actual stories to talk about.

Kowabon’s strength lies in its creative visuals and fairly good ambiance. It does not lie in its story or characters because they simply don’t have any.

The people in the stories have names, but they’re mostly just bodies to put on screen to be victims.

Another issue with reviewing this series episode-by-episode is in the fact that basically every ‘story’ is the same.

There are two threads that hold every episode of Kowabon together.

The first is cameras. 99% of this series is seen through the lens of a camera, whether it be smartphone cameras, webcams, security cams, even doorbell cams and, here’s something I’ve never seen before, backup cameras – the ones you have on your car to help you reverse.

What’s that, you say? A heavy theme on cameras probably means an overreliance on distortion effects to help deliver scares? Why you’re absolutely right, reader!

Which brings us to the second thread – the girl.

Design-wise, the girl is basically an amalgamation of the ghost from The Ring and a warped version of Manny from Grim Fandango. The girl is given no name, backstory, MO, or even a location where she’s supposed to frequent. She’s just kinda everywhere. Maybe not even limited to Japan. The only consistent thing with her is that she appears wherever someone is being filmed. I was going to say she can also only be seen with a camera but there’s evidence to the contrary on that front.

Each episode is exactly the same. Normal people doing very normal things. Then the video distortion starts. It gradually gets worse. Either the character given focus will notice weird stuff happening or the person on the other end of the call or watching the feed will notice, which frequently leads to ‘There look behind you! There!’ ‘What?….Quit fooling around, I don’t see anything.’ More distortion, the girl appears, more horror elements then boom, the girl gets the victim.

Sometimes they’ll add on a little bit after, like in one of the episodes they have the girl pretend to be the victim to her friend then send her a flood of texts demanding she open the door, which I thought was surprisingly effective, but they’re all the exact same story.

Even though there are little things that add to the scare factor, it becomes very formulaic very fast.

The ‘stories’ also have absolutely nothing to do with each other outside of the last two. Episode twelve, which is arguably the silliest episode, but I still found amusing, has a pop idol making a video of herself at some park dancing. The girl gets her, then episode thirteen has a fan of hers going to the spot where she disappeared to investigate what happened. Surprise of all surprises, the girl gets him there too.

The series is half and half when it comes to jump scares. They tend to rely on the creepy vibe they’re creating, but they sometimes can’t help themselves but go for the obvious jump.

Even the music is a bit off. There isn’t a lot of actual music, which is nice to add ambiance, but what is there is typical horror music. Then you have the ending theme song, which, while being very catchy, is a sharp contrast to the theme of the show. It has bouncy little cartoons, the song itself is very bubbly and fun, and it feels so weird being in a horror show.

To take you out of the experience even more, each episode has a behind-the-scenes clipshow of the episode in question playing in the corner as the credits roll. I really like watching behind-the-scenes stuff, and it’s nice to see the cast and crew enjoying what they’re doing, but it really yanks you out of whatever horror mood you were in. And there’s no dialogue so you don’t even get cool little behind-the-scenes tidbits outside of what you can gather from the video footage.

All of this culminates in a bit of a mess of a series. I like some of the stylistic choices, and some of the creative horror elements were really neat to watch. I also like how it’s insanely easy to binge watch it. I never had a difficult time going through any of the episodes because they were so short. I really think if they were much longer it would become a chore to sit through, given the formula they use.

However, I can’t deny that there’s no structure, no story, no characters, uneven tones and a boring repetitive baddie that is so close to The Ring (Hey, she does come out of video screens sometimes) ghost I almost want to call copyright infringement.

Additional Information and Notes: Kowabon was directed by Kazuma Taketani. This is Taketani’s directorial debut, but, to date, he doesn’t have any additional crew credits to his name, which is disappointing. Interestingly, it was written by Hiromu Kumamoto, who did the scripts for every iteration of Yami Shibai to date except the fifth entry. It’s kinda strange that I keep trying to find things similar to Yami Shibai and I continue to end up back with the crew of Yami Shibai. Is it really that niche of a market?

And just to keep that circle going, it was produced by ILCA, who also produced not only every Yami Shibai to date but also Sekai no Yami Zukan.

There is no English version available nor is it currently licensed in the US.

Recommended Audience: No sex, swearing, or anything really bad. There’s some bloody handprints in one episode, but that’s about it. Given the horror themes, we’re probably already slightly up there in age range, but it’s okay for 10+ probably.