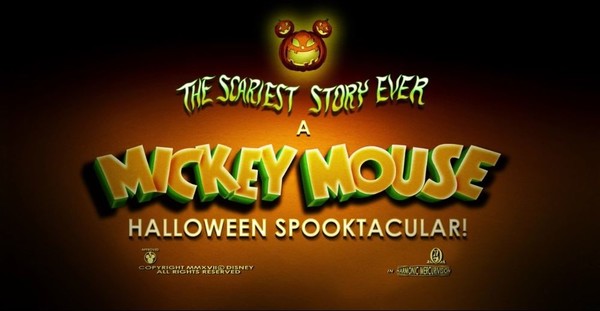 Plot: As Halloween night comes to a close, Mickey decides to tell Huey, Dewey, Louie, Morty and Ferdie a scary story before bed. However, old Mick just can’t seem to come up with a story that is really scary. With the boys getting more out of hand and Mickey’s confidence in his ability to scare fading, can Mickey find it within himself to deliver a spooky tale?

Breakdown: So how’s everyone enjoying the new Mickey Mouse….’reboot’? Is it technically a reboot? Let’s just call it a reimagining. I’ve heard some pretty good things about it. Not as much as the Ducktales reboot, but still good things. I’ve only seen a couple of shorts in passing, but I enjoyed them quite a bit. I think they do a very good job at creating a new series of Mickey shorts with a fresh and modern coat of paint on them.

I feel like they sometimes go a bit overboard with the style, though, and I’m not talking typical cartoon rubberhose animation overboard, I mean….It’s really hard for me to explain, but it’s like, on some occasions, it’s channeling Ren and Stimpy.

Don’t get me wrong, I like Ren and Stimpy, to a degree, but it’s very low on the list of shows I think of when I think about Mickey Mouse. And I can’t help but get that vibe every now and then when they do quick animation gags.

However, the show has the style and writing chops to deliver on the horror aspect….at least for the audience it’s intended on scaring. I will admit, however, that the last story was really atmospheric and ‘graphic’ for even the adults watching to get invested and wrapped up in the spookiness.

I also like how it’s clear they’re not trying to pussyfoot around with the new generation. We have body parts and popping off Mickey’s scull cap to reveal his brain, viciously murdering children and baking them into pies and creating an entire hedge maze out of skeletons.

The writing on the comedy was also top-notch. I found myself laughing out loud several times throughout the episode. They do a great job at catching you off-guard with jokes and creating funny running scenarios. I absolutely loved the gag with Donald and the bat. That was gold.

I also really appreciated the little subtle details that older kids and adults would catch, like the Steamboat Willie reference or Chernabog on the mountain in the background. I even loved how they did the credits with the sendup to the classic shorts with the title card and the really creative ways they added the credits as they panned throughout the town. I also love their use of color. It’s very striking and fun yet adds to the spooky atmosphere wonderfully.

Side note, I knew Mickey had nephews, Morty and Ferdie, just from reading things in passing, but it kinda threw me off at first that they were here. I didn’t even know their names (I knew one was Morty because Mickey listed them off at the beginning, but I couldn’t understand the second) and it’s impossible to tell them apart when they’re in costume (Though, even in their regular outfits, I don’t know how to tell who is who. The colors of their overalls and shirt are inverted to tell them apart, but I don’t know whose color is whose.) They’re basically the same as Huey, Dewey and Louie, though, so it’s more like just adding in more boys.

The new Mickey Mouse’s style may take some getting used to for older fans, but I’m definitely putting my seal of approval on this great Halloween special, and it’s prompted me to sit down and give the rest of the series a proper watch.