Skip to content
HomeSmile Precure/Glitter Force Episode 7: Where Could it Be? Our Secret Base Sub/Dub Comparison 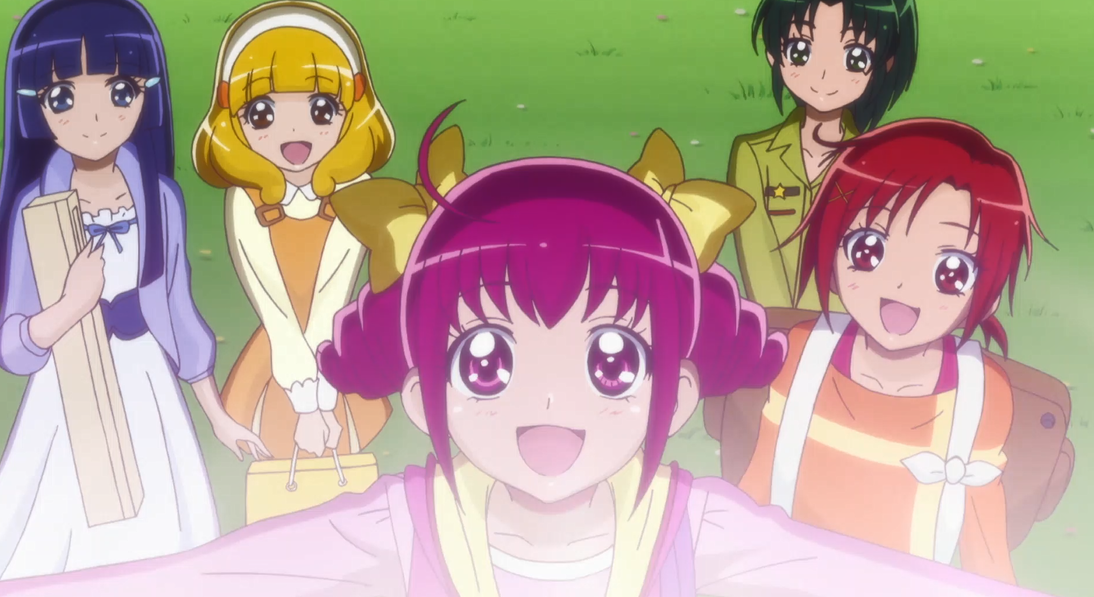 Plot: Unable to talk about Precure stuff in public, the girls use the portals in the Wonder Library to find a secret base all their own.

Miyuki: “We place the Phone Decor in the Decor Decor…” She just said ‘decor’ three times in one sentence……

Pop originally says he’s happy to see they’ve mastered the Phone Décor. In the dub, he asks if there’s any news to report or anything he can help them with.

Akane said the UFO was a crow, but Kelsey says it was a pigeon.

Title Change: Where Could it Be? Our Secret Base is changed to The Perfect Hideout.

The dub inserts an exterior shot of Emily’s house after we cut from school, probably because that’s where the original’s title screen was.

The first book Miyuki took was Alice in Wonderland. She doesn’t mention the title in the dub.

The second book she takes is Heidi, and the third is Cinderella. For some reason, Netflix removed that shot. 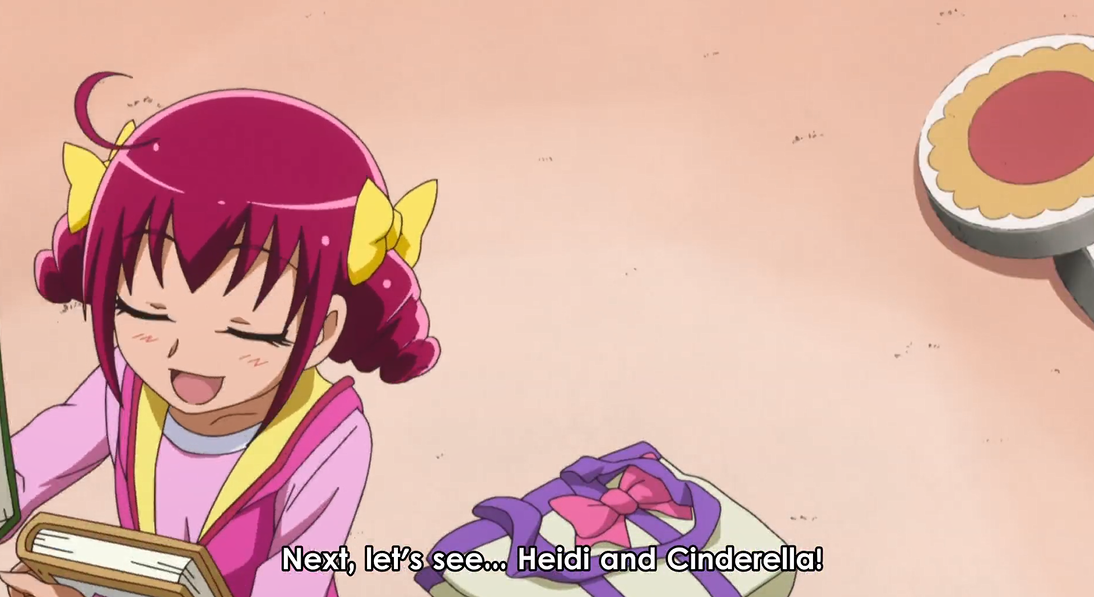 The final book she takes is Anne of Green Gables. The dub, again, omits this.

A closeup shot of Miyuki after the portal opens is removed. 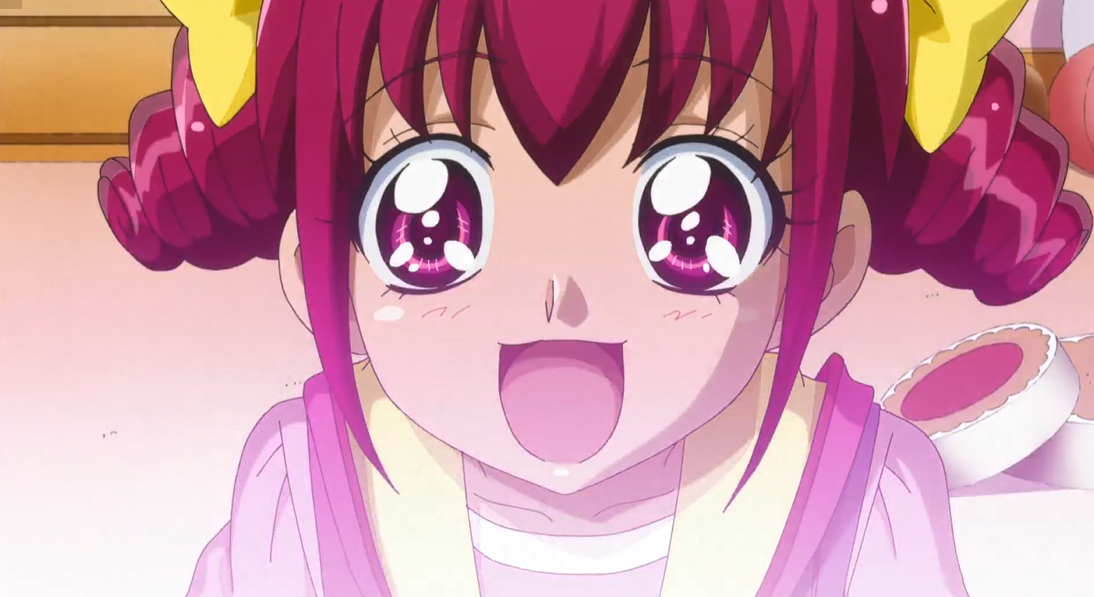 Reika says she hopes she remembered the combination for the portal correctly. In the dub, Kelsey is saying it’s so wild how they can all open portals in their bookshelves.

Okay, how the heck did Miyuki’s hood get caught on a tree branch that high up when she was on the ground? 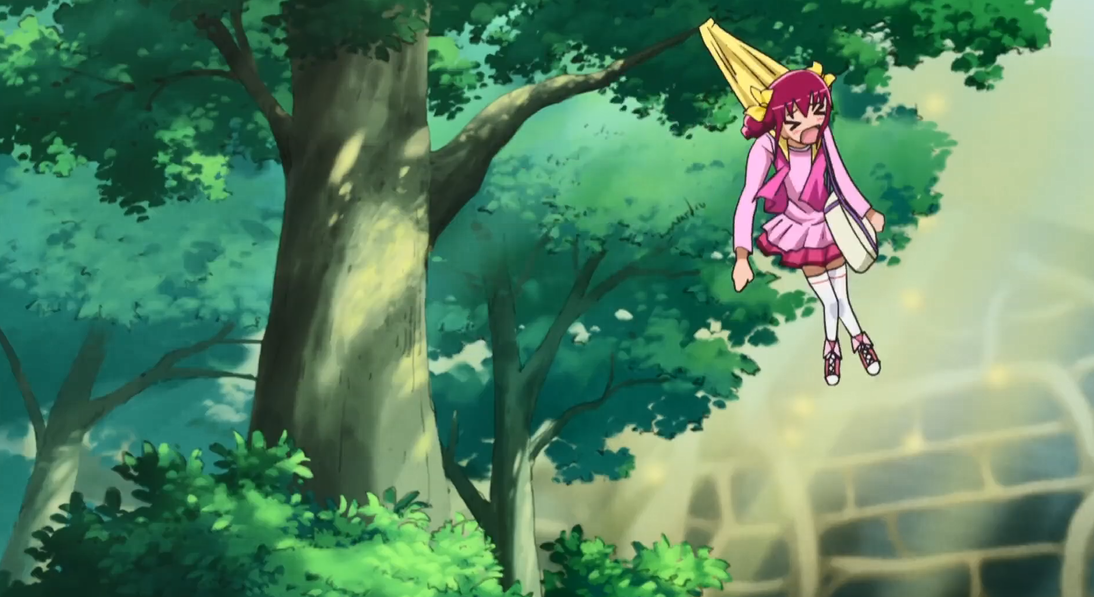 Candy’s kinda cute when she says “And they all fall down, kuru~~” In the dub, Candy says “No roughhousing in the library!”

For some reason, Miyuki and Yayoi both yell out “Nicer?!” when Nao says that. In the dub, they yell “And it’s dangerous!”

I thought the portals worked by everyone needing to think of the exact location before they enter. Miyuki’s mind wandered in the previous episode, which is how she got lost. However, when Reika says she has an idea for a place and they ask her where, she just says “Why don’t you see for yourself?” and opens a portal. That shouldn’t work…

Reika specifically says they’re on Mt. Fuji. I don’t know why they decided to omit this detail because they have said time and again that the portals can take them anywhere in the world, which means this doesn’t de-Americanize the show, but all Chloe says is it’s a high-altitude weather station.

The Kanji for ‘The road ahead’ is changed to ‘GF’ It’s actually a very good paint edit since it tracks with the flapping so well…..really loses the oomph of Reika’s big road of hardship to something as grand as the Mt. Fuji speech, though. 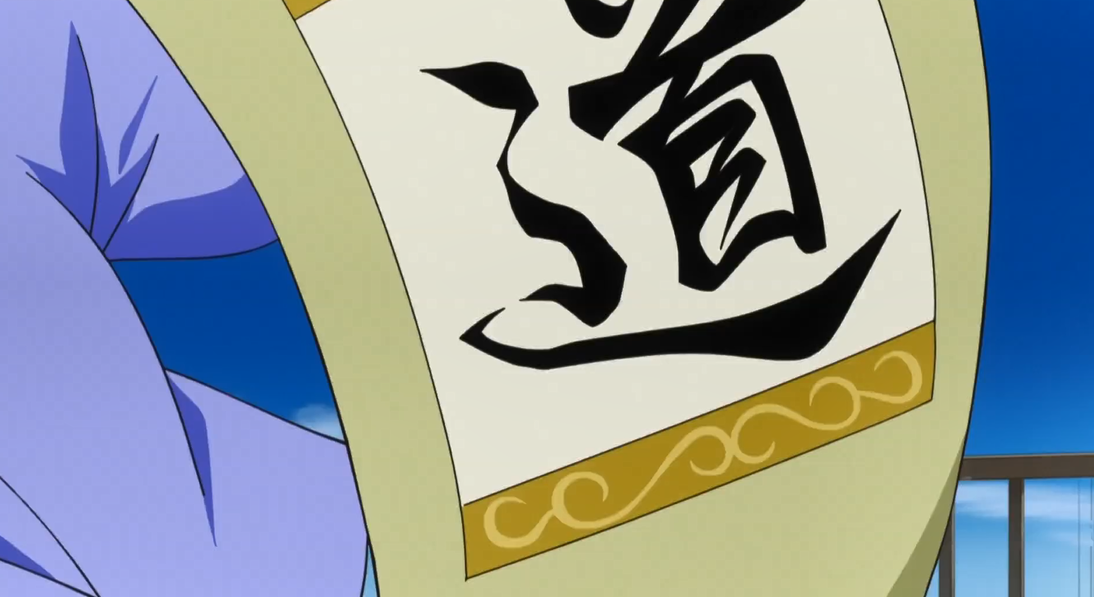 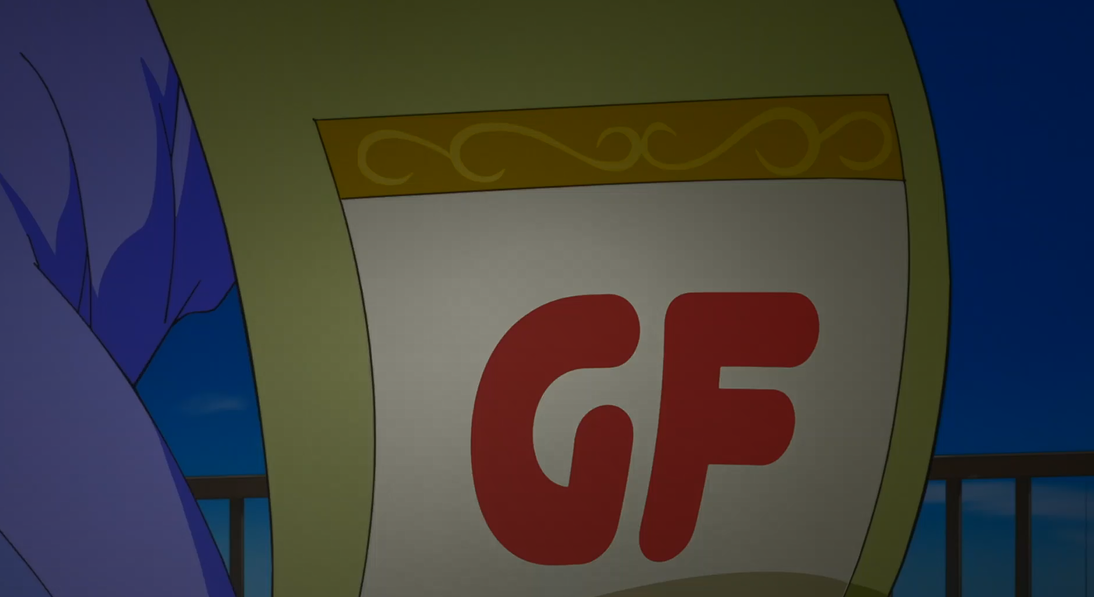 Chloe writes a poem as a mission statement instead of giving said speech in the dub. It has…basically the same message, but it’s made to be…well…humorously dorky….You can tell because when she’s done…Netflix adds a record scratch when they cut back to the girls….You’re so original and clever, Netflix.

Being fair, the original kinda does the same thing thing by slowly stopping the heroic music, but it’s not as blatant or eye-roll-worthy as the record scratch.

Honestly, Reika’s idea wasn’t so bad. I’m not sure if anyone works in that station on Mt. Fuji, and you never really know when someone might be there, but it’s one of the most remote locations in the world with, what I assume is, a relatively warm and accommodating facility to use. April mentions there’s no furniture there, either, which I get to a degree….There have to be at least a few chairs, but yeah, I get it.

The writing on the box Reika has is removed. 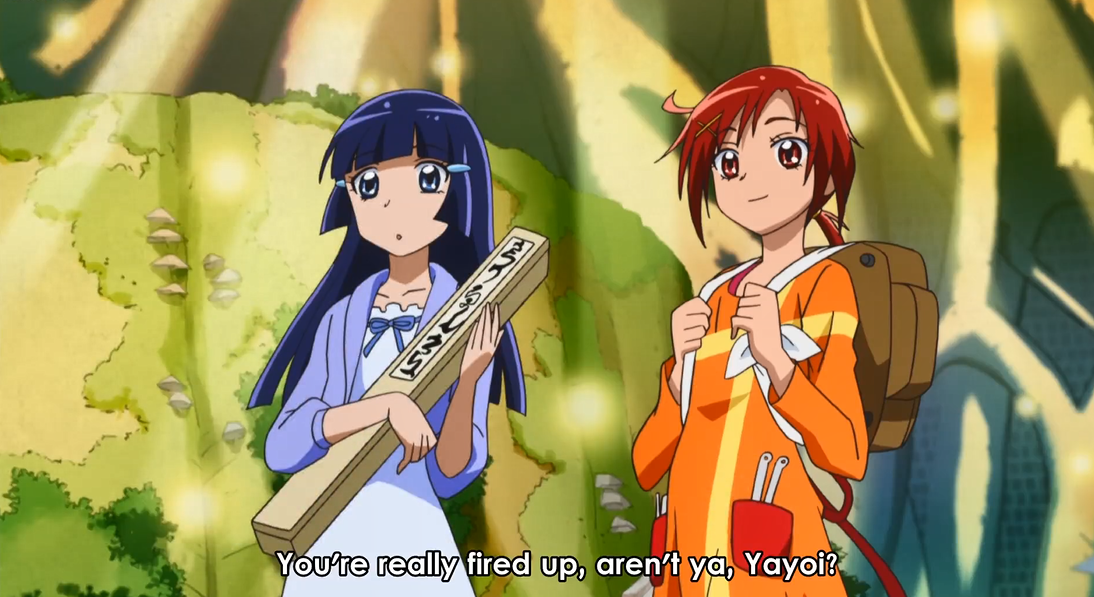 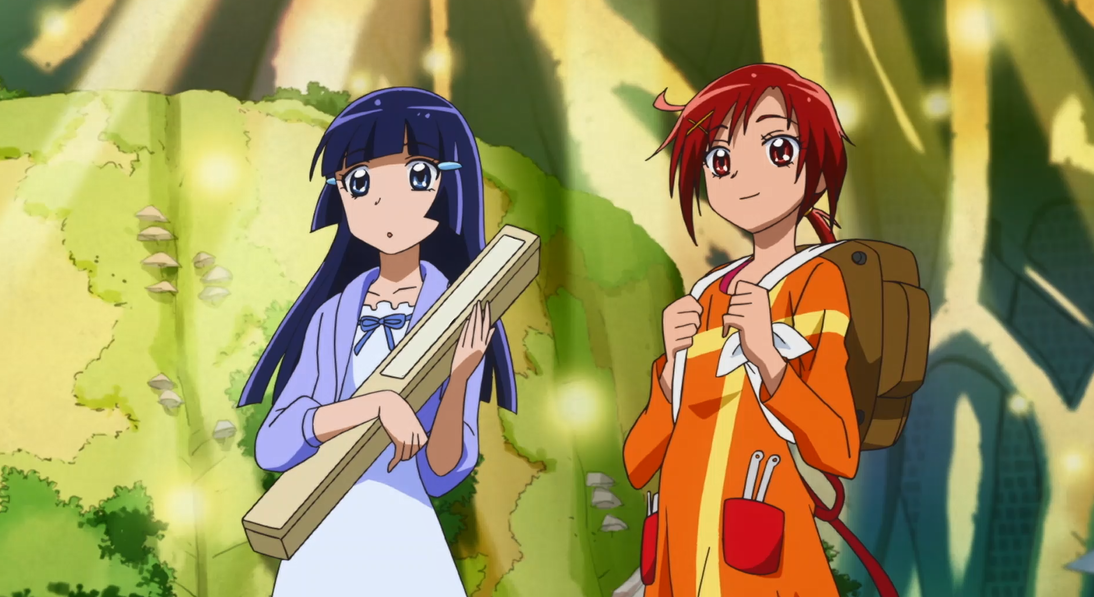 So I’m guessing all of them will open a portal without telling the others where they’re going. Why even establish that rule about everyone needing to picture the location if you’re not going to follow it?

Yayoi snips at Reika for choosing a stupid location, but then she chooses a MOVIE SET CURRENTLY IN USE for her ‘SECRET BASE’ location?!

Akane admits that she and Nao are two peas in a pod because she likes girly cute stuff too. In the dub, she says she never pegged April for a cutesy girly stuff type, but she can see herself relaxing in that room.

They omit the mention of Akane wanting to eat some okonomiyaki while relaxing in the room.

The sign that says ‘Plush toy section’ is changed to ‘Furries and fuzzies’………..Uhmmmm……so….who wants to be the one to tell Netflix what a furry is? 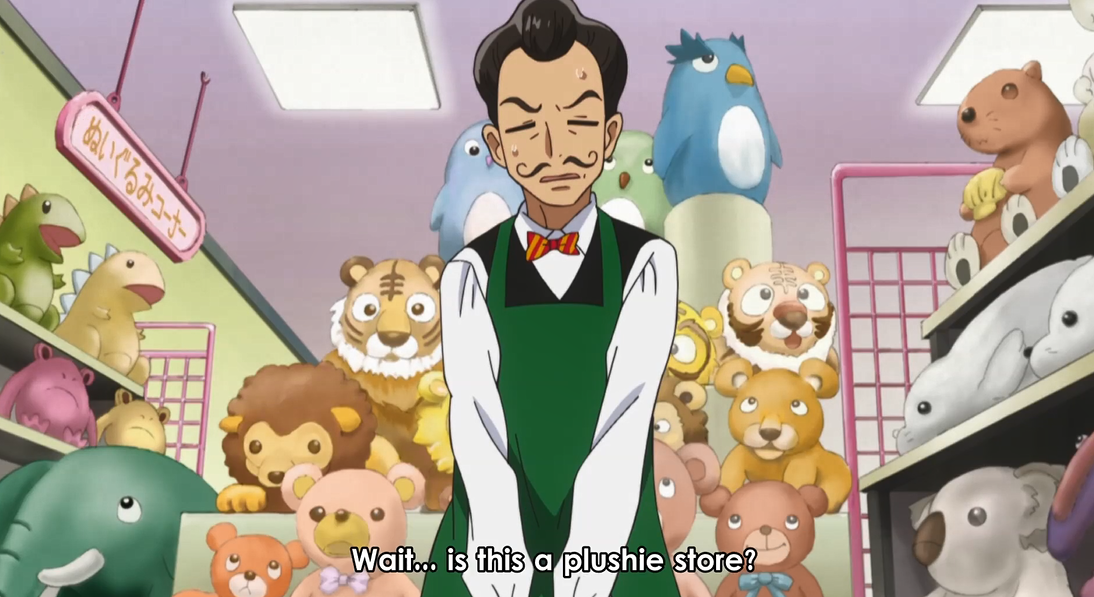 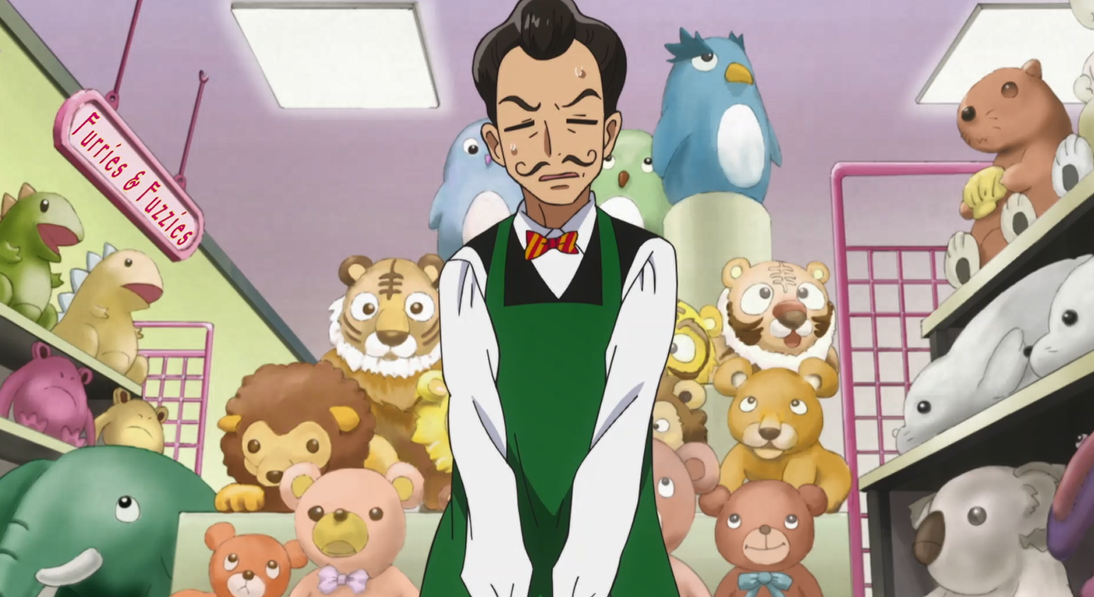 Also, Nao, you should be intelligent enough to know that a toy store isn’t anywhere near private…..

The sign that says ‘Stuffed Shop’ is changed to ‘Plushie’s Playhouse.’ 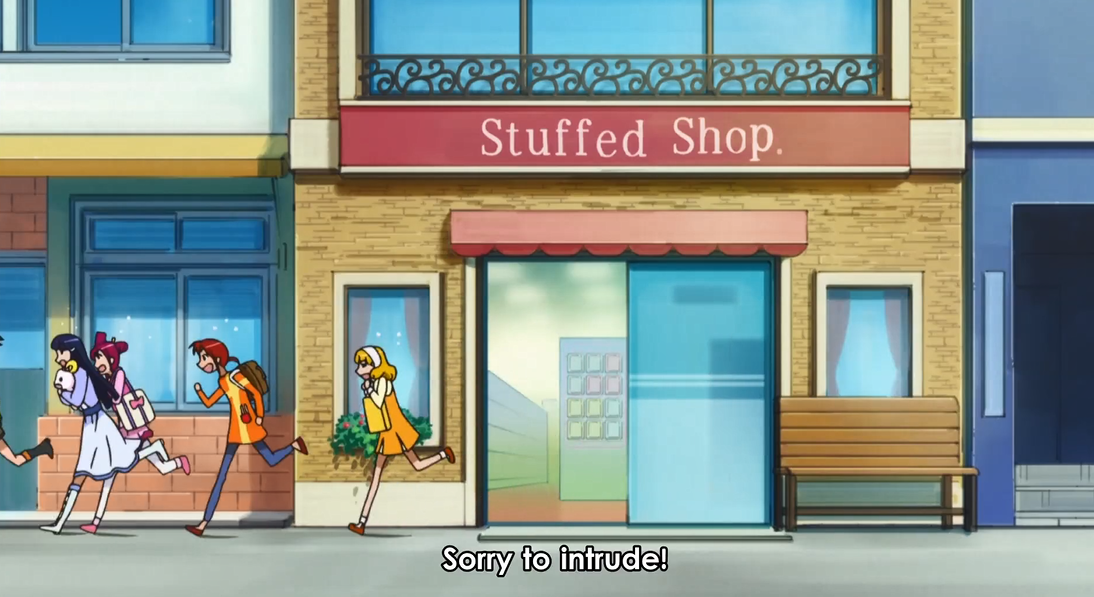 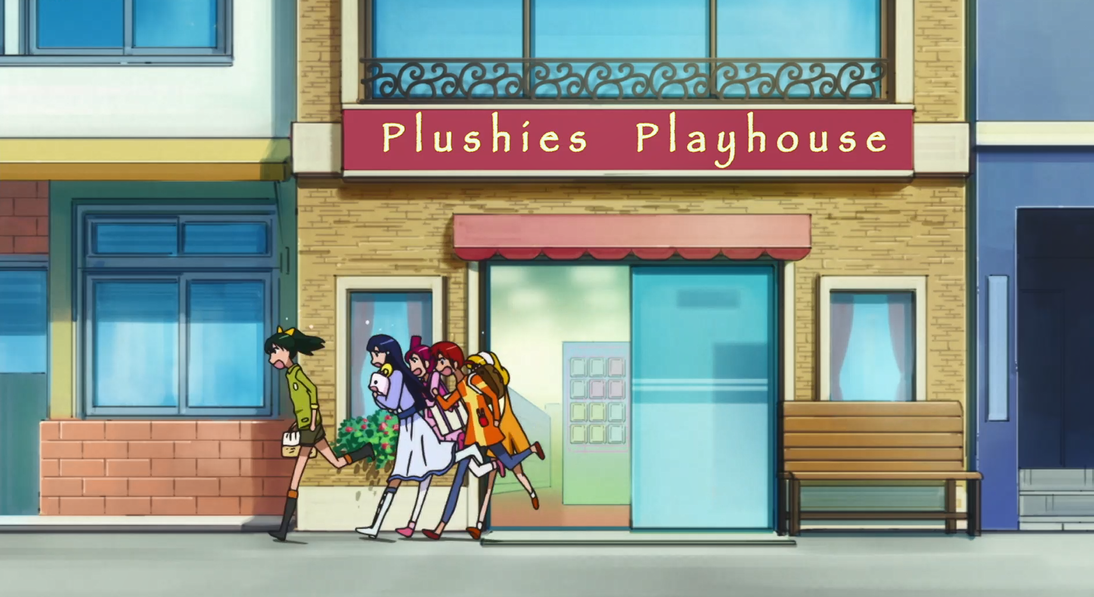 Wait, now they’re even ignoring the bookshelf aspect? Because it seems like they went right from running in the street to running into the next base location.

Is Akane a crazy person!? A zoo, especially inside of an exhibit, is a really stupid place to put a secret base. Emphasis on SECRET….and more emphasis on NOT GETTING YOUR BODY RIPPED IN HALF BY A GORILLA! 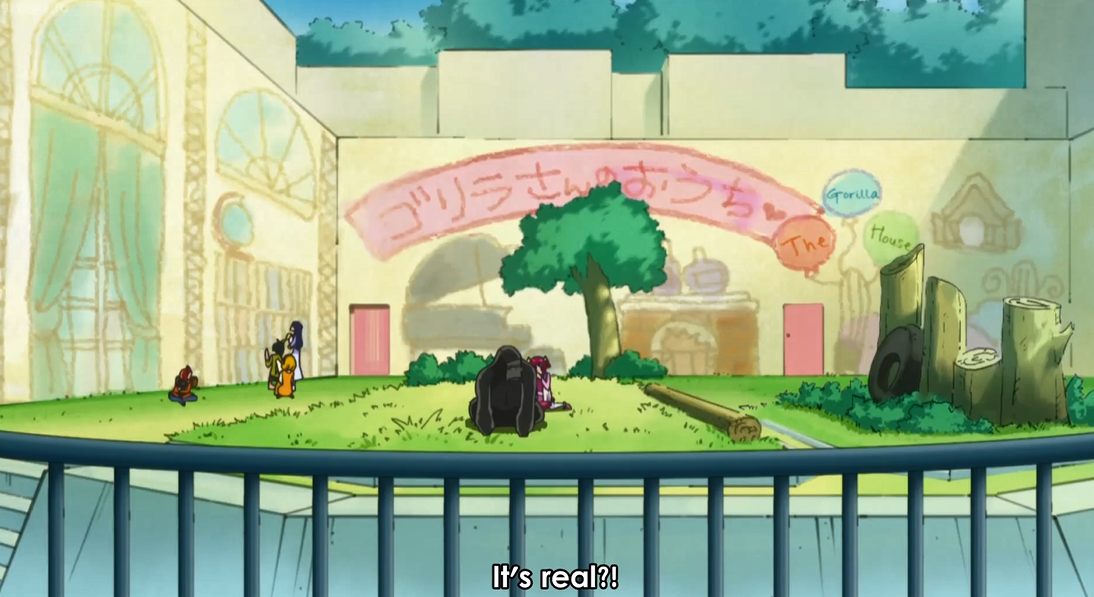 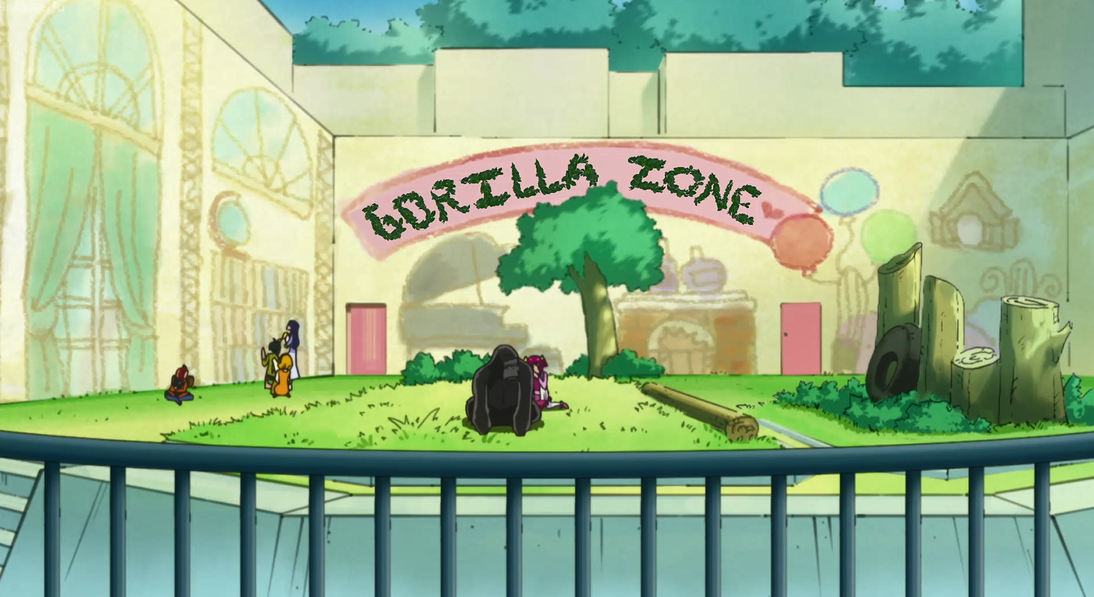 Yayoi yells at Reika for quietly contemplating their situation. In the dub, Lily yells that this is a terrible place for their secret base.

Akane: “I just thought nobody would disturb us in there, ya know?” In a public gorilla exhibit at a zoo!?

Miyuki brings out the Anne of Green Gables book. In the dub, it’s The Magic Meadow. I’m not sure if Netflix thought there’d be copyright issues or they just BS’d something for no reason.

Additionally, Netflix leaves the girls nameless whereas, in the original story, they’re Anne and Diane.

Why does the dub even bring up that the spot is by where she used to live and Emily asking if it’s too far?….They’ve just come back from the top of MT. FUJI….Or I guess just a mountain in the dub. Surely that’s not farther than a spot near her old house.

The games the little kids originally come up with are ‘Grown-ups’ and ‘tailor.’ In the dub, it’s ‘tea party’ and ‘store.’ I kinda like the dub’s version better.

A good joke is removed in the dub. Wolfrun originally says he wants to make it clear that he’s not smiling, he’s grinning menacingly. In the dub, he says the little girls should know not the wander around in the woods because a big bad wolf might come out.

Ya know, Pierrot could’ve been revived ages ago if all of the enemies just went out to different locations, sucked up the energy and then left and did it a few more times. The clock doesn’t go back down when the Precures succeed in defeating the Akanbe, and if merely two girls worth of energy is enough to make it go up one, it’d be easy as pie.

They remove them applying their powder right before their pose again.

Rock, Paper, Scissors!: Draw this time. We both chose scissors.

So, yeah, altogether, they now have two and a half minutes worth of recycled footage they can use in each episode with the girls’ transformations.

Miyuki says she won’t let Wolfrun ruin these girls’ special spot in the woods. In the dub, she says that she can’t believe he turned an oak tree into a monster and that it’s terrible for the environment to do so.

Miyuki says she always forgets how high she can jump (Wait, if the other girls can jump just as high, does that mean jumping isn’t really Miyuki’s special ability?) Emily asks if anyone has hedge clippers.

I really like how Wolfrun is drawn/animated in this episode. I dunno why.

Miyuki yells that this spot in the forest is the most special place in the world. In the dub, she calls Ulrich a ‘mangy old flea bag’ and tells him to keep his mitts off of it, which ruins the impact of the scene, if you ask me.

The Akanbe’s attacks don’t have names in the original. In the dub, they’re Buffoon Bulldozer and Buffoon Bash.

This Akanbe was pretty damn boring. All it did was smash stuff with its branches. Also, how completely and insanely random that Wolfrun happened to choose a spot in the woods that just so happened to be the spot Miyuki used to love that they just so happened to be visiting at the same time even though it was at her old town, and that two kids just happened to also not only choose that spot to be their secret spot but also be there when they arrive so Wolfrun can have someone to target for some reason?

Today’s Cure Decor is a ring….Hm.

I really wish April would shut up about furniture. Just bring some chairs if it’s so important to you.

Nao teases Akane by asking who it was that objected to the Magical Library as their secret base in the first place. In the dub, she teases her by asking if it’s alright that the library doesn’t have gorillas.

For my opinions on the episode as a whole, check out my episode review here.

As for the comparison, it fared pretty well. There were more paint edits than I was expecting, but it was tame as pudding compared to what I’m used to with other shows. Many of my notes are just about the episode itself. I was a little bummed they chose to edit out the mention of Mt. Fuji for no other reason than Americanization, but what can you do?

I’m more bummed that Netflix seems intent on talking about books as minimally as possible. Miyuki loves books. They’re a big part of the plot, and her desire to go to that spot was built on a book plot, yet they do everything they can to just not talk about books. Did they adopt 4Kids’ disgusting take on ‘Kids don’t read, they just enjoy purty pitchurs’?

2 thoughts on “Smile Precure/Glitter Force Episode 7: Where Could it Be? Our Secret Base Sub/Dub Comparison”