Skip to content
HomeAardman’s Clay: The Pirates! Band of Misfits/In an Adventure with Scientists 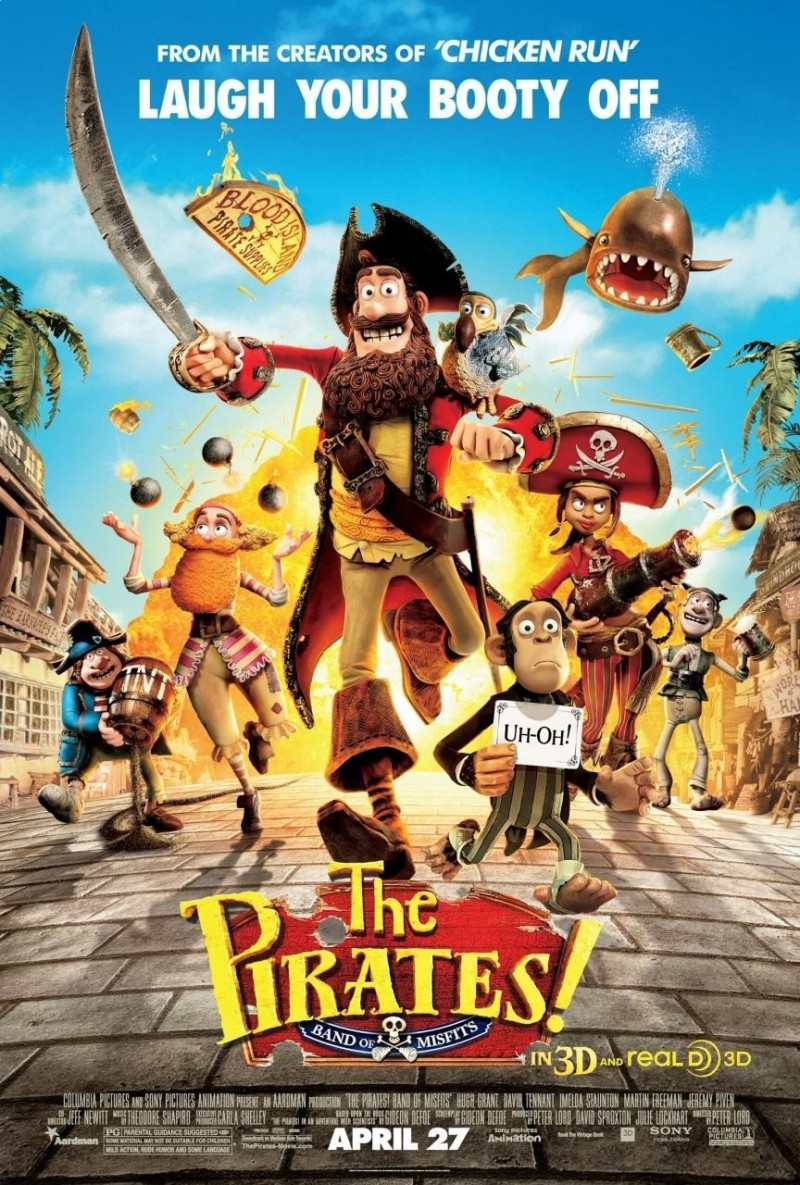 Plot: The Pirate Captain is a bit of a bumbling chap. While he adores life on the seas with his crew and all of the adventures they have, he’s not the best at his job. He yearns to be Pirate of the Year, but he’s considered a joke among the other pirates in the community. While trying to attack more ships to gain a better reputation, he comes upon the research ship of Charles Darwin, who is incredibly interested in the captain’s beloved ‘parrot’ Polly. Turns out, she’s actually an extremely rare dodo bird – last of its kind.

Charles wants the bird to be world-renowned in the world of science (and be successful enough to get a girlfriend) and the Pirate Captain believes presenting the bird will make him a lot of money and give him recognition. He won’t give Polly over since she’s one of the family, but when the world sees you as a loser, you’re sometimes willing to sacrifice family for a taste of fame and respect.

Breakdown: This is the first time Aardman has really failed to engage me as well as it usually does.

That’s not to say The Pirates! is a bad movie in the slightest, it’s just rather predictable and a little blah for Aardman. After about the first 15 minutes, I knew almost exactly where the movie would go beat by beat. The only thing that caught me a little off-guard was the climax, but only because I didn’t think people would be so stupid as have a competition to see who can find the rarest animal to cook and eat – and that the royal figures of the world were the ones holding it.

Cleverness abounds with the jokes. Aardman is never really a disappointment there. I especially enjoyed every shot with Mr. Bobo, Darwin’s mute monkey assistant who speaks in flashcards. And I did enjoy the relationship between The Pirate Captain and his first mate, Number 2 (Hardly anyone has an actual name)

I just can’t see myself wanting to watch this again anytime soon. It never clicked me on that level of pure enjoyment. It was especially a chore to watch them go undercover to present Polly to the scientist award committee and Captain try to pretend everything’s fine at the Pirate of the Year awards. We just got done with a movie with similar themes, and I don’t much care for it in the first place.

I also had to roll my eyes because, of course, the one prominent female pirate is a flirty sexpot that everyone wants to get with. She’s not a big part of the movie, but it still irked me.

(And, yes, I’m aware of the Surprisingly Curvaceous Pirate.)

In regards to the art and animation, I love the way they melded regular stop-motion with CG. It flowed extremely well, and some of the shots on the sea were quite beautiful. The character models are better than usual because they don’t fall into the ‘I’m always showing all of my giant teeth at all times’ habit they were wrapped up in for a long time. The style as a whole is different, if only slightly, and it’s a bit of a nice breath of fresh air.

The music is slightly out of place sometimes. The score is usually fairly good, but then they insert modern songs and it feels off. They’re not pop songs, but they still don’t fit that well, in my opinion.

All in all, this is a fun movie and I think everyone should give it at least one watch, but it’s not Aardman’s A game.

Recommended Audience: There is mild violence, these are pirates afterall, some dark themes like implied torture and execution. No nudity or sex, but a couple of very mild swears. 10+

One thought on “Aardman’s Clay: The Pirates! Band of Misfits/In an Adventure with Scientists”