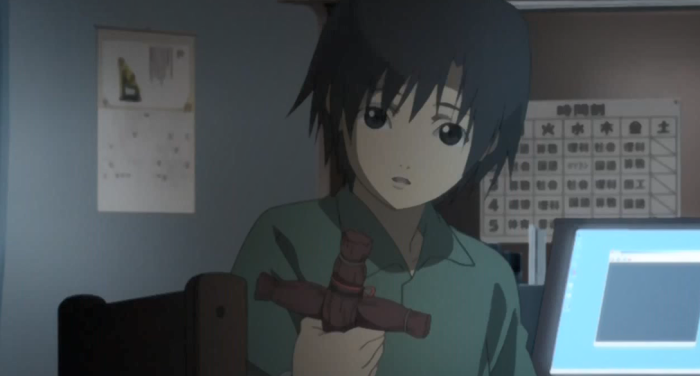 Plot: Takuma, known as “The Devil’s Child,” and his family are being viciously harassed every day. Their yard is constantly littered in piles of garbage and threatening messages. They initially believe that it’s due to the neighborhood behind extremely strict and them missing one day of garbage collection, but they soon realize that it’s a vendetta that runs much deeper. Sadly, the only way to get this message across is through tragedy.

Breakdown: Hell Girl’s not exactly known for being an uplifting anime, but holy hell on Mercury, this episode is one of the most depressing ones I’ve ever seen.

Not only is the story terribly depressing, but the target this time around has to be almost laughably sociopathic and evil to achieve all of this.

This is one episode I actually remember from back when I first watched this season as it introduces us to a character who returns later in the season and basically becomes the season’s main character, Takuma. However, I didn’t remember just how screwed up his backstory is.

For the most part, Takuma lives a rather normal life. He’s the son of a famous movie producer and just got back from living ten years overseas in New York. However, shortly after he moves back to Japan, his family starts getting horribly accosted by someone who is dumping large piles of garbage on their yard with threatening notes.

Takuma’s family considers moving away since this situation is bad for his mother’s heart condition and they’re concerned over Takuma’s happiness and safety.

Soon after they tell their friend and neighbor, Kakinuma, who used to work for Takuma’s father, about their upcoming move, someone spreads around papers accusing Takuma of being “The Devil’s Child,” claiming he’s killing birds and cats around the neighborhood and causing mayhem.

Not but a day later, someone shoots an arrow into their living room, hitting Takuma’s mother in the neck, killing her. Takuma tries to pursue the assailant, but only finds a bunch of arrows and a crossbow. Someone from the neighborhood sees him with the crossbow and perpetuates the rumor that he’s “The Devil’s Child” by claiming Takuma shot and killed his mother.

The police investigated Takuma, but didn’t have any evidence to charge him.

At his mother’s funeral, he overhears Kakinuma’s ex accuse him of the murder, citing him murdering her baby as reason enough to suspect him. Takuma tries to tell his father, but he seemingly doesn’t believe him, telling him to leave it to the police and not have such feelings of hatred in his heart.

Takuma attempts to contact Hell Girl, but he changes his mind and gives the doll back, agreeing that he should just leave it to the police like his father said.

That same night, his father confronted Kakinuma with the accusations, but Kakinuma laughed it off like nonsense. Takuma’s father soon agreed, until, that is, he finds a surfboard prop in Kakinuma’s house. It was littered with holes, like someone had been using it for target practice with a crossbow.

Now, let me back up. Throughout this entire episode, there is no doubt whatsoever that Kakinuma is the culprit before we even see him printing the papers about Takuma (and the photos of the dead cats…) He looks like a psychopath, he spends his time sitting in the dark watching his old movies and he sucks at playing pretend friend.

But Ho. Ly. Shit. He’s a contender for the Most Overly Evil Dumbass award, only finding competition from the bitch from Bound Girl and the guy from The Tarnished Mound. 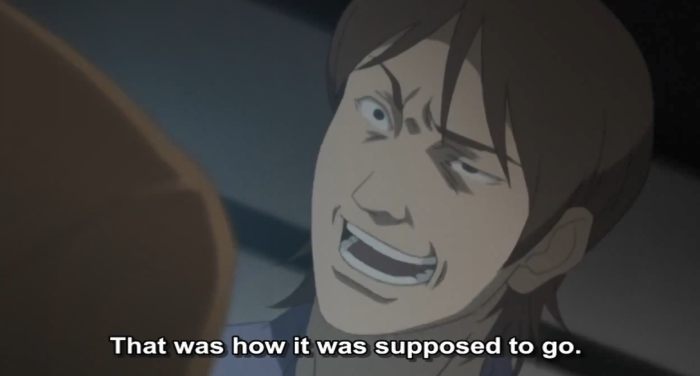 Kakinuma used to be a writer for Takuma’s Father, Mr. Kurebayashi, referred to as Kure. Ever since Kure made it big, Kakinuma has had trouble getting work. According to Kakinuma, writers like him are seen as parrots of their producers and have no real talent of their own, so no one will hire him. Kure claims he probably hasn’t actively pursued work and just expected jobs to fall in his lap due to the fact that he had worked under a famous producer before. I’m more inclined to believe Kure because Kakinuma’s reasoning makes no sense.

It makes even less sense as he continues. He claims he hated Kure for his success, so he got the bright idea to completely destroy Kure’s life, paint Takuma as a devil kid and write a screenplay about the events that would land him millions.

Thus, he started endlessly dumping trash and threatening notes on their yard, killed birds and cats with arrows and claimed Takuma was a demon child who did it, and the cous de gras, he shot an arrow at Kure’s wife. He supposedly only wanted to wound her, but it hit her square in the jugular vein, causing her to bleed out within seconds.

Since Kure found him out, he decided to attack him with a broken bottle, horrifically wounding him.

Takuma realizes his father is being assaulted by Kakinuma in his house and rushes in. As his father lay bleeding on the floor, Kakinuma attempts to kill Takuma next.

Backing up again, back to the ex-girlfriend of Kakinuma, she had been wallowing in a deep depression for quite some time. She had gotten pregnant, and Kakinuma threw her down a flight of stairs to kill the unborn baby. He succeeded. The big plot twist of the episode is that she’s actually the client today.

Takuma’s story is meant to somewhat mirror Ai’s, and I totally get that. Poor Takuma didn’t do a damn thing to deserve any of this. He wasn’t even involved in any of it. He was the child of a man who had the ire of a sociopathic dumbass and his entire life was ruined because of it. It’s so dumb because, in the end, Kure just seems like a victim. No one will ever know Kakinuma’s real part in it, besides his ex, and Takuma is vilified, possibly being sent to prison for god knows how long.

Even if he isn’t sent to prison, good luck ever having a life with any semblance of happiness ever again. His mother is dead, murdered in front of him, his father is horrifically injured, and the moniker of ‘The Devil’s Child’ will surely follow him into adulthood.

A curious aspect of this episode was Kikuri’s role in it. Kikuri has interfered in jobs before, but she takes a particular interest in Takuma. Why? I don’t know. She goes to his house, draws crayon pictures of dead bodies, talks about him visiting Hell Link (he was visiting the site often to get vengeance on the person responsible for tormenting his family, but all he did was stare at the screen. He never inputted a name and even begged Hell Girl not to come.) and even gives him one of the ‘Devil’s Child’ papers when his family was trying to keep them from him. Nice. Still hate you, Kikuri.

It’s just such an unpleasant episode that I wasn’t even sated by Kakinuma finally going to hell both because they skip the hell torture today (though we do see him riddled with arrows in the boat) and the fact that he seems happy that he’s going to hell.

The fact that his motivations were so ungodly dumb was also a negative. Dumb motivations aren’t uncommon in Hell Girl, but Kakinuma was a gold star recipient here. Being jealous of the fame of someone you used to work with while you wallow in has-been land is rough, but not rough enough to torment a family, destroy a child’s life, murder a person, seriously injure another and laugh about it.

I don’t remember how Takuma’s story ends, but let’s hope it’s at least happier than what he was left with here.

If you enjoy my work and would like to show your support, please considering donating at my Ko-Fi page. Thank you! ♥