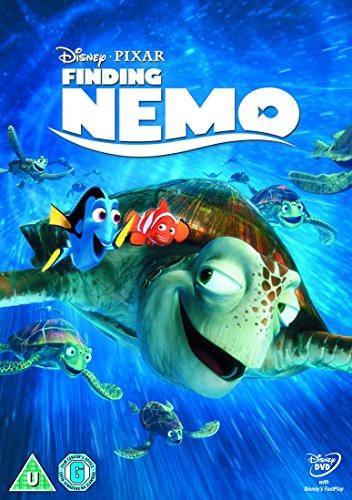 Plot: A clown fish named Marlin had it all. The love of his life, Coral, a new home in the anemone and a clutch of fish eggs nearly ready to hatch. His perfect life comes to a grinding halt when a barracuda suddenly attacks. Coral, in an effort to rescue her babies, is killed and the eggs are eaten anyway. Marlin, having been knocked unconscious in the scuffle, wakes up to find everything gone except for one lone egg that was damaged in the attack. He names the fish Nemo – a name chosen by Coral right before she died.

Also, there are way too many death fake-outs. Nemo has a grand total of five death fake-outs. Dory and Marlin have one together, and Dory kinda has one on her own (It’s more like a ‘severe injury’ fake-out)

The voice acting is fantastic. I loved Willem Dafoe as Gill, and Alexander Gould did a great job as Nemo.