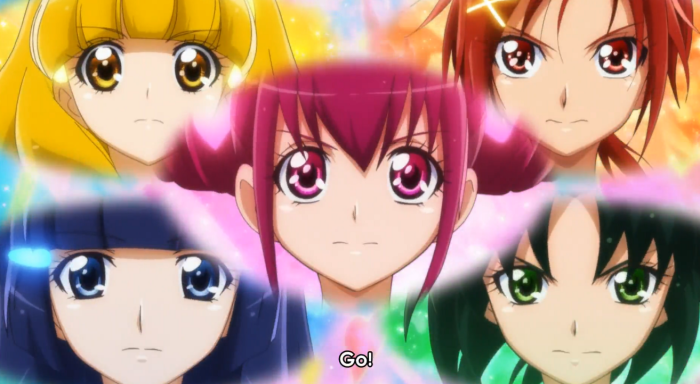 Plot: The five Precure are finally assembled! Candy’s big brother, Pop, arrives to check up on his sister and share the story of Marchenland and the Precures to the girls. While Nogo’s minions are collecting energy to revive their master, the girls need to collect the Cure Decor from the Akanbe to free Marchenland’s queen and save the world.

But first things first – what will their catchphrase be?

The banner is wiped clean of text. 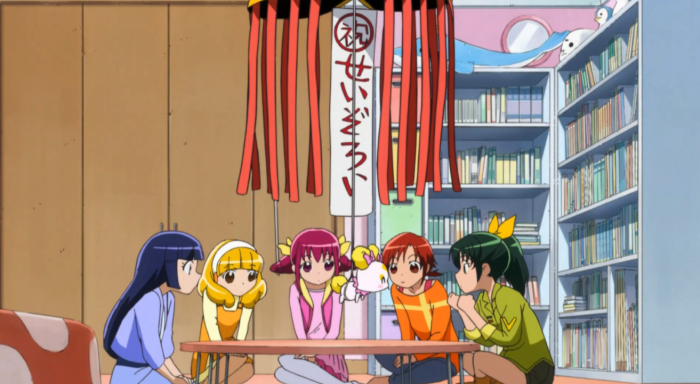 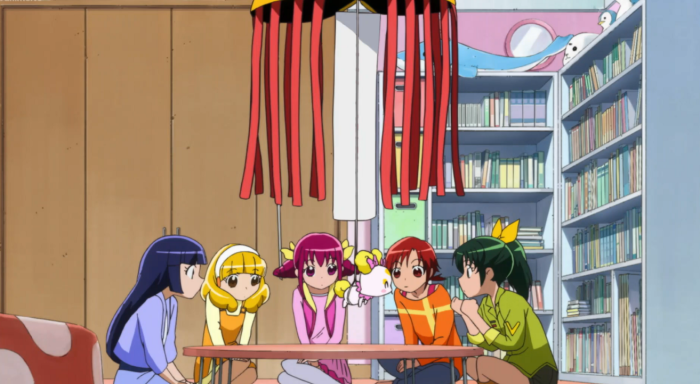 Yayoi originally asks what the monsters really are. In the dub, Lily repeats April’s question about why they have powers.

Miyuki asks what the monsters are after. Emily tells Candy to tell the others the story she told her.

Akane asks what they’re supposed to do about the monsters. Kelsey asks why Candy won’t tell them.

The music is pretty funny in the original because it gets slower and slower until it stops as Candy gets increasingly nervous about the girls’ questions. In the dub, this effect is lost and we’re just left with typical goofy music.

Candy originally doesn’t know the answers to the girls’ questions at all. In the dub, Candy forgot the story she told Emily. I don’t know why this causes such a freakout because, if Emily knows, surely she can just relay the information.

The book originally calls Miyuki a ‘fair maiden,’ but he doesn’t in the dub.

For the record, Pop is adorable.

All of the books have the text removed from their spines, as usual. 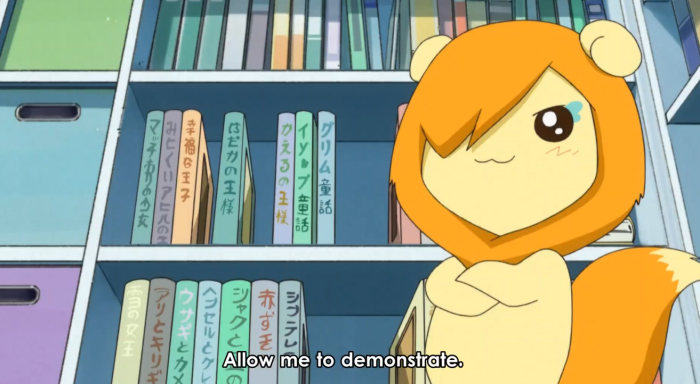 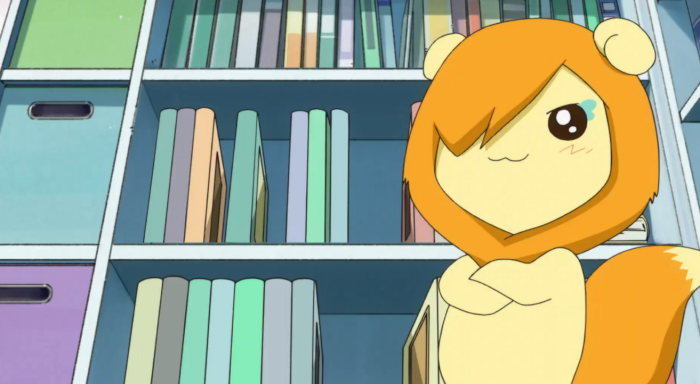 Title Change: The Team’s Assembled! We Are Smile Precure! is changed to The Library of Legends.

Brooha’s voice when she says “Seriously?” is hilarious (In a good way).

Miyuki doesn’t keep interrupting Pop during the story like Emily does.

The box for the Cure Decor is originally called the Decor Decor. In the dub, it’s called the Charm Chest. I actually like the dub’s name a lot better because 1) it’s not ultra repetitive and 2) They refrained from using the word ‘glitter’ in it, so I have to give them points for that.

Name Change: Joker is changed to Rascal. I was going to question why, seeing as how he came out of a Joker card, but I can imagine they didn’t want DC to sue them up the ass.

Akane just says “That’s me!” when her picture shows up. Kelsey adds “I rock!”

Joker….jokingly points out that there are only five Precure. Rascal asks how they can beat five Glitter Force Warriors when they couldn’t even take down two.

Akaoni repeats with a scoff that there are only five. Brute says he could take on fifty of them.

I’m really surprised they left in Joker licking his lips like that.

Anyone else get confused when characters in magical girl anime seem to know and acknowledge magical girl tropes? Like, are magical girl shows a thing in these universes or are they pounding down the fourth wall?

The eyecatches are starting to repeat themselves now. If they change, I’ll post them.

I did not just hear Emily say ‘Awesomesauce.’ Nope. It didn’t happen. I refuse to acknowledge that. No.

The original first catchphrase was ‘The five of us are….Goprecure!’ In the dub, it’s “It’s us, of course! The Glitter Force!” They nix that one.

Akane shoots that one down because they’re not Goprecure. In the dub, she says it’s not exactly brilliant.

Pop originally says he doesn’t understand what they’re doing. In the dub, he says that’s the tenth catchphrase they’ve come up with and they’re not getting any better. 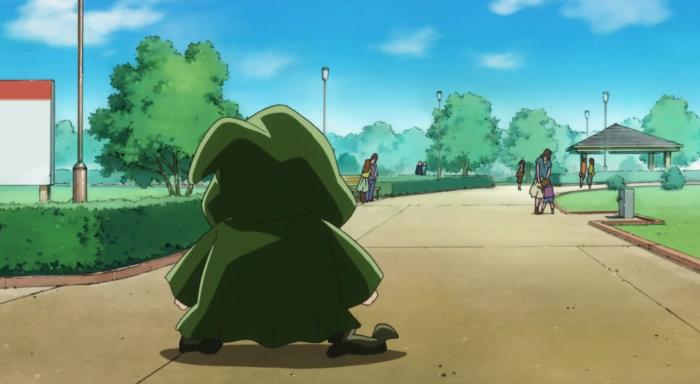 The book-gates are changed to just magical portals. Both names are really lazy if you ask me.

I would ask why Miyuki/Emily thinks a penguin is talking to her, but considering all of the other oddities in her life at the moment, I’d say that’d be relatively normal.

The Akanbe this week is an empty soda can? That’s the best thing you can find in a park?

Please don’t tell me they were seriously waiting all that time to transform just because Emily wasn’t there and they didn’t have a catchphrase…..Lives are hanging in the balance, guys.

Not sure why Kelsey randomly yelled out “Watch out, world!” when she transformed.

Wait, so in addition to their post-transformation sayings, they’re also going to have a group catchphrase? That’ll eat up a lot of time.

Rock, Paper, Scissors: I won this episode! I chose rock, it was scissors. 🙂

The original group catchphrase is “Our five lights will blaze a path to the future. Shining bright, Smile Precure!” In the dub it’s “Time to blaze a way to a happy ending! (Emily: “Ready girls?”) Shining Bright! Here comes the Glitter Force!” It actually didn’t change as much as I feared. Surprised.

I love that they got shot immediately after all that, though. It’s like another potshot to magical girl tropes.

Emily: “Sneak attack. No fair…” Sneak attack? They were right in front of you the whole time, and you just spent nearly two whole minutes doing your shtick.

Pop’s voice deepens when he transforms in the original. It doesn’t do so in the dub.

Candy says Pop can transform. In the dub, she says he transformed into a trash compactor because he’s really into recycling.

Now Emily’s back to the cheerleading chant. Yay.

Sooooooooooooooooooooo…..in the episode that celebrated the Precures all being together for the first time…….they needed Pop to defeat the Akanbe and everything else relied on Miyuki? (They didn’t transform until she got there, they all fell together from one attack by the Akanbe and only Miyuki was called on to give the final blow. They all slammed press!Pop together, but was that even necessary?) Bit underwhelming.

Oh so the cell phone Cure Decor is a real phone that can communicate through dimensions. That’s actually really cool…..still think it’s a bit odd to have it look like a modern cell phone, but at least it has a real purpose.

The promise of always saying goodbye with a smile is basically kept, but the dub adds in the silly adage of ‘turn that frown upside down.’

Aw, the picture in the book of Pop saying goodbye actually plucked my heartstrings a little. That was so bittersweet and cute.

The really sad music in the original isn’t helping. Someone please do something silly because I’m starting to get misty.

Oh no worries, I’m instantly cleared up by the dub not understanding ambiance at all with their goofy soundtrack and stupid joke by Kelsey. Thanks.

You can find my opinions on the episode as a whole here.

As for the dub, it fares very well. There are only a few line changes here and there and only a few minor paint edits. The ending was bungled, but, being completely fair, the mood does change to goofy near the very end either way, it’s just that the dub ruined it earlier with their goofy song and joke.

I’m shocked the catchphrase really wasn’t changed much, and even though I can imagine having all of the individual girls’ phrases and the group phrase together will be more repetitive and time-consuming than normal magical girl shows as episodes go on, I’m not too concerned.

Next episode, the girls try to select a spot for their secret base!