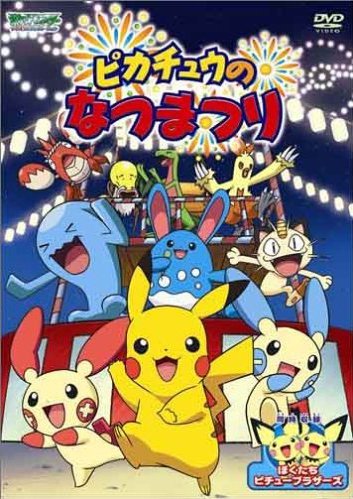 Plot: Pikachu and a slue of other Pokemon are setting up for a summer festival. Their headline act that night is a singing Marilli/Azumarill, but she suddenly gets kidnapped by a Airmd/Skarmory. It’s up to Pikachu, Plusle, Minun, Nyasu/Meowth, Sonansu/Wobbuffet and friends to save her and the festival!

Breakdown: I often joked when I watched the other shorts that they were so one-note and ‘cute Pokemon being cute’ that I could watch them without any dialogue whatsoever and know exactly what’s going on.

So, of course, the first short that I’m forced to watch in Japanese raw is one that has an actual plot where the narrator is providing dialogue for all of the Pokemon….

Yes, the English dubbing of the Pokemon shorts has ended and now the only way I can review nearly any of the shorts beyond this point is by tracking down the raw versions.

Granted, there’s not a whole lot of plot to make this difficult to follow without help, but I was still thankful for the Wiki page to give a full detailed synopsis.

With that out of the way, this is a very enjoyable short. Pikachu wasn’t the main focus, in fact he didn’t really do much more than any other singular Pokemon. He might have even done less than a majority of them. The other Pokemon got plenty to do (Loved Wakasyamo/Combusken, Juptile/Grovyle and Fushigidane/Bulbasaur, even if the latter only got one very small part, it was so cute) the plot was pretty good and even Nyasu wasn’t annoying at all.

That old Madatsubomi/Bellsprout was really creepy, though.

The plot with the Bossgodora/Aggron was good but a tiny bit contrived. The Aggron and its….children (?) heard about Marilli performing at the summer festival, but they live on an island and can’t cross the water to see her. So, they did the next logical thing and kidnapped her so she could perform for them.

This isn’t too contrived for a Pokemon short, but Bossgodora is shown to have several Pokemon friends to help him with stuff, like Airmd, who kidnapped Marilli, Coil/Magnemite who chased Pikachu and the others away, and Samehader/Sharpedo who tried to stop them in the water. Why did he not think to ask if there was a big Water Pokemon around who could give them a ride? Like, oh I dunno, the Whaloh/Wailord who gives them a ride at the end because Ohsubame/Swellow heard the story from the old Madatsubomi and asked him to do it.

Also, why is a Pokemon who is not known for singing or its nice voice, and can’t even learn Sing (unless it’s bred by a Pokemon who can naturally learn it) being the headliner singer here? I wouldn’t be so bothered if not for the fact that the singing doesn’t sound like Marilli’s voice at all and there’s a frickin’ Purin/Jigglypuff singing backup! I’m not sure it’s the one we know and…tolerate, but it’s still a Pokemon known for its singing.

Despite these minor issues, this was still a very enjoyable short. It had plenty of action, comedy and nice moments all around. Even the music was great. Some of those tracks were bringing me right back into the games, and the festival song was pretty good. The ED was mediocre, though.

Recommended Audience: Why are you reading this section? You know the answer. You’re just looking for me to say something funny here, aren’t you? Well, not today, pal! I’m going to say boring stuff like taxes, congress and proofreading! Regret reading this now, huh? That’ll teach you!