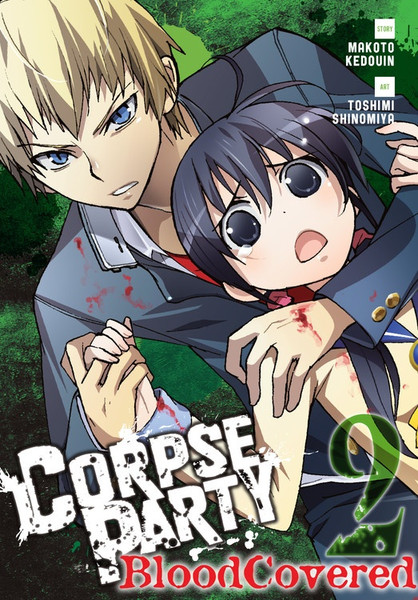 Plot: Satoshi Mochida, Yoshiki Kishinuma, Naomi Nakashima, Seiko Shinohara, Ayumi Shinozaki, Mayu Suzumoto and Sakutaro Morishige are all very close friends at Kisaragi Academy. Saddened that Mayu is going to be transferring next year, Ayumi propositions them to partake in a charm ritual that will supposedly bond them all forever – Sachiko Ever After. Joining them are their homeroom teacher, Yui Shishido and Satoshi’s little sister, Yuka.

However, upon completion of the ritual, they are thrust into a strange different school called Heavenly Host Elementary. The school is blackened, wrecked, with many holes in the floor and structural damage. The place is littered in corpses and there are revenants around every corner.

What’s worse is that the group has been separated into smaller groups and spread not only over the school but also over dimensions, meaning they have no way to regroup and return home. They’re soon tormented by the revenants – attacking them and seemingly wanting them dead.

What is the secret behind Heavenly Host Elementary? And can they all return home alive?

Breakdown: It has been several years since I played any of the Corpse Party games, including the game this is directly adapting, Corpse Party: Blood Covered, so even though I remember the main gist of the story, I wouldn’t be able to give this manga a play-by-play comparison to see how it matches up.

That being said, I did really enjoy the Corpse Party games I played. I got bad ends, and that anatomical model can go to the deepest recesses of hell in a coffin made of napalm, but I still got really invested in the story and the characters. It had its hiccups, but they were really well-made.

Blood Covered is an absolutely amazing horror manga. It never made me scream or anything, but I jumped once or twice and it definitely kept up a great atmosphere.

The series pulls no punches with its violence or gore, and by the end I was nearly crying, which is strange because the ending is a lot happier than any of the ends I ever got.

The story was also well-written with several twists and turns that I never saw coming. I had some moments during the Corpse Party games where I felt like the story was contrived or didn’t make full sense, but the manga does a good job ironing those issues out. The only question I really have is SPOILERS Why does Heavenly Host still exist at the end? It shows the kids who were murdered as supposedly being the new spirits running the joint, but they got their body parts back and turned good. I know the spirits still ended up being a part of the school, but I thought their spirits would dissipate or move on once the school was destroyed. What re-tainted them? END SPOILERS

While the character designs are simplistic in style, the horror elements are beautifully stylized and detailed. There are so many panels in this manga that I stopped on just so I could appreciate the creepy vibe they were instilling in the scene.

The characters were also pretty memorable and likable, barring one recurring theme I’ll get to shortly. They were all realistic characters reacting and interacting like real people. I ranted on Twitter a bit about one pretty stupid decision Satoshi made, but it’s not like people don’t make stupid mistakes, especially in horror stories. I felt particularly impacted by Yui, who never once truly faltered in her resolve to stay true and not play this out selfishly or be affected by the darkness.

Mayu never really got a chance to be affected by the darkness, and Satoshi never got affected because that might make him interesting.

That being said, I had some minor issues with the characters. Morishige and Mayu were such non-characters that I pretty much forgot about them by the time the story put the focus back on them. I almost thought Morishige was a completely foreign character wandering around.

They also don’t do much with him when he is reintroduced. We find out he’s got an almost fetish level amount of admiration for corpses, leaving the audience forever wondering if this is a trait he’s always had or if he developed it because of the influence of Heavenly Host. He spends a while searching for Mayu, whom he views as a sister, and outside of spoilers, that’s about it.

His impact on the story is extremely minimal, and Mayu’s impact is even less than that, which is worse because their stories are intertwined so it kinda comes off like they’re just here to up the body count.

Another issue I had was that I was perpetually irritated by the fact that nearly all of the female characters had a romantic obsession with Satoshi – even his little sister! (I can’t escape the incest. Thanks, manga….)

It’s just incredibly irritating, especially when it comes to Ayumi and Yuka. I won’t lie that part of my irritation with Ayumi is the fact that Yoshiki is in love with her, even confesses it so, but at the very end she’s still dedicated to Satoshi and barely pays Yoshiki any attention even though he’s damn near died several times trying to protect her.

When Yoshiki starts feeling the effects of the school and it’s geared towards jealousy of Satoshi, even though it’s only a few scenes, you do sympathize with the guy because, as far as I’m concerned, Satoshi is a pretty bland Gary Stu.

Seriously, I would never be able to describe Satoshi any further than ‘He’s a nice guy and a good big brother.’ Even the people who are in love with him don’t describe him any further than that. Like in the games, the manga makes off like Satoshi is the main character, but he really isn’t. Numerous other characters are more vital to the plot than Satoshi is. I just kept wondering what it is about this guy that makes him so appealing to so many girls.

As far as Yuka is concerned, she could’ve been a lot more annoying, and they didn’t focus a lot on her romantic feelings for Satoshi, but it’s still irritating, especially in regards to the fact that she acts and looks more like a damn toddler when she’s, according to the Wiki, 14 years old.

Also, they spend an inordinate amount of time trying to get this girl to the bathroom….

These aren’t really major issues, but they did keep cropping up and it did get annoying.

All in all, this is a fantastic read. I found myself staying up late reading and being disappointed that I really needed to stop reading and go to bed. Corpse Party tends to do a really good job at making characters that you truly care about while also making a terrifying atmosphere and not balking on deaths. It’s a great mixture of creepiness, gore and horror, and while it does have a few issues in the character department, it’s nothing damaging enough to make me lower my opinion by much.

Corpse Party has several other mangas out, and I hope to review them in the near future. Maybe I’ll even get my hands on another one of the games or watch the live-action movie.

Additional Information and Notes: Corpse Party: Blood Covered was written by Makoto Kedouin. It was illustrated by Toshimi Shinomiya. It was published by Gangan Joker.

Recommended Audience: There is a TON of gore and frightening situations here. People get pulverized by getting thrown into walls, there are a bunch of chopped up corpses, there are scenes where characters get their eyes stabbed and popped out, their tongues cut out, their heads lopped in half etc. and it is pretty detailed in its gore too. There’s a smidge of fanservice, but not a lot. No nudity either. 16+