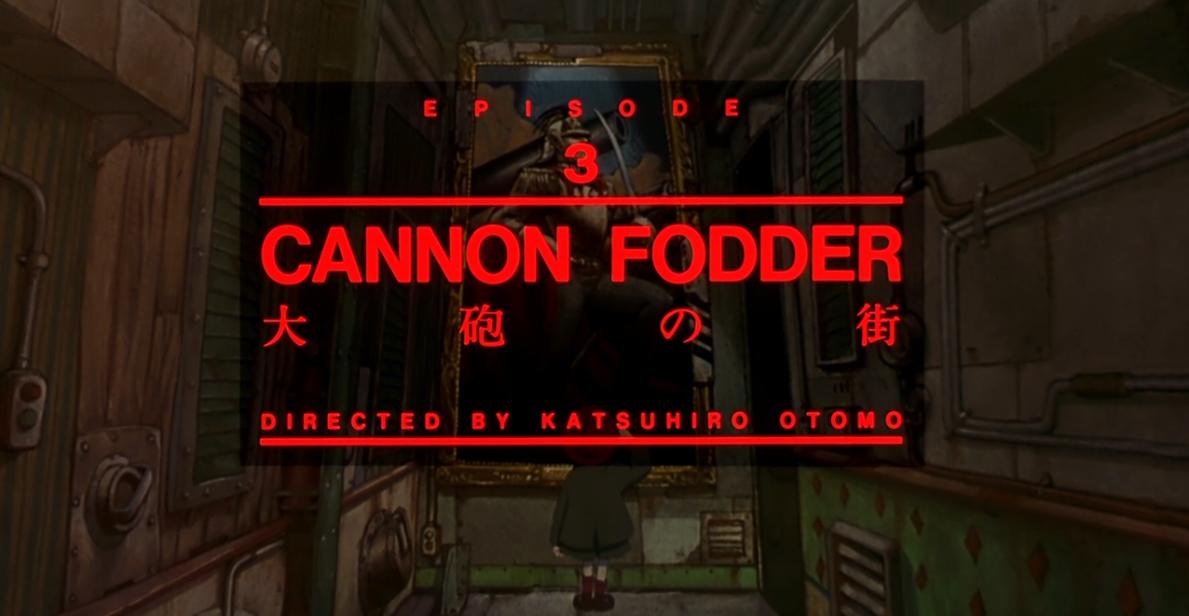 Plot: In a communist dystopian reality, life is all about one thing – shooting cannons at the enemy.

Breakdown: As you can tell from the lack of a description, I am at a loss with this segment. That is really all this segment is – life begins and ends with these insanely massive cannons that they shoot at some unseen and unnamed enemy.

It’s not hard to get the ‘true message’ behind it. This is war. It has infiltrated all of life. The children are taught nothing but the mechanics of the cannons. The adults are either stay-at-home moms, teachers, cannon loaders or military personnel. Everything is steel and steam. They are the only life on this slab of metal, but it’s hard to say they’re really living.

The episode focuses on an unnamed family where the mother is a stay-at-home mom, the father is a cannon loader, and the son is infatuated with becoming the ‘one who shoots the gun.’ He has absolutely no real grasp on this war outside of what he’s been taught about the cannons.

He only knows that they shoot cannons at the enemy, and the enemy is bad. He even asks his father who the enemy is, and he gets no answer outside of the standard “You’ll understand when you’re older.” There’s also a crayon drawn cartoon of him imagining himself as the big general in this war against the enemy, and he can’t even imagine a real description of them outside of evil-looking people with cannons.

The only thing we learn about the enemy is that they live in a mobile city that we never see.

That is how far the brainwashing goes – you’re forever awash in war, but you have no grasp on the enemy or why you’re even fighting. The higher ups just tell you they’re bad, so they must be bad. This is especially exemplified in the scene where the cannon finally fires and everyone in the city does this united monotone cheer that they seem to be forced into doing.

It’s a pretty heavy-handed message that doesn’t go far enough to make any sort of impact. They spend an inordinate amount of time focusing on the cannons, but only a minute or two focusing on how little those in charge care about the civilians. The workers are being poisoned by the gunpowder, but we only see them protesting against it, not anyone suffering from it. Other than the father getting yelled at during work once, there’s nothing else. It’s dreadfully boring, if I can be blunt.

This story also doesn’t go anywhere. I was expecting some big ending or counterattack, but all they show in the last 30 seconds is an air raid light shining through the window, which I guess is ominous, but I can’t even be sure that’s happening because they make that exact same noise when the cannon goes off. It shouldn’t be going off late at night, but still.

The one thing that kept me interested was the visuals. This segment has art and animation akin to those old British cartoons. It’s all scratchy like it’s drawn in charcoal. The character designs and the background art are pretty nice to look at, as much as a socialist city of steel and weaponry can be nice to look at. Plus the environment and the directorial style were very interesting.

I feel like this whole movie went in reverse. Have this segment be first and have Metallic Rose be last. You shouldn’t have your movie start on a high note and end in a misfire….get it? Because…cannons.

It’s not terrible, it’s just…boring and obvious. It’s also not saying anything most people don’t already know. I feel like I’m just not getting something about this episode, but no matter how much I dig, I just can’t find more substance.

Additional Information and Notes: Memories – Cannon Fodder was directed and written by Katsuhiro Otomo, and it was produced by Studio 4°C.

Recommended Audience: Nothing at all really happens, but given the tone, I suppose 7+?