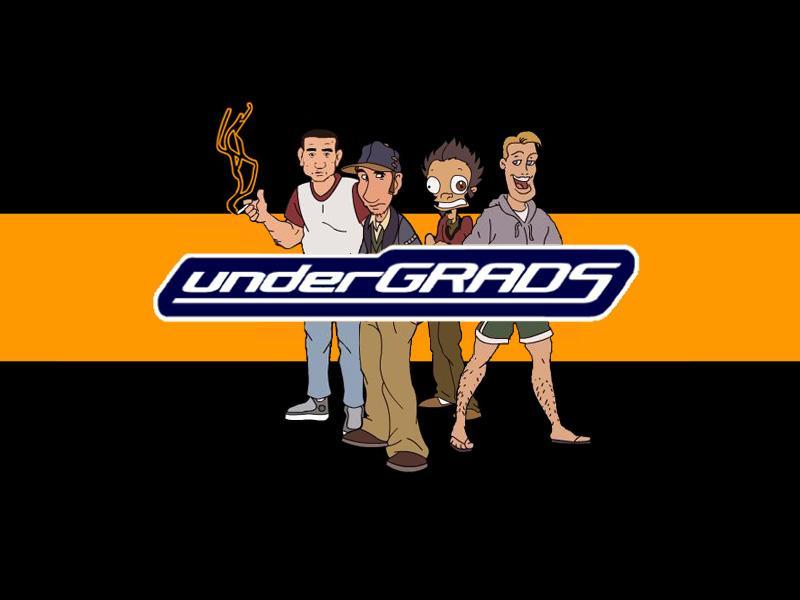 Plot: Nitz, Cal, Rocko and Gimpy are four childhood friends who are heading off to college. They live up the college life in their own ways while pursuing girls, booze and parties.

Breakdown: I somehow remember seeing bits and pieces of this show when it was on the air. I don’t think I much cared for it, but I recognize the art style. Gimpy’s weird face especially stuck with me a bit. Didn’t realize until about halfway in, though.

That being said, this show is okay. It establishes all of the main characters rather well, which is impressive seeing as how we actually have about six main characters so far. It also sets up the story just fine.

It’s just kinda boring is all. I never was a fan of anything that takes place in college, because it’s always the same material. It’s more predictable than high school dramas. Beer, get laid, party, schoolwork’s in there somewhere, we all have a license to be stupid because college, ironically.

And, really, that’s all you get here too. We have the four college stereotypes; Nitz the straightman, Gimpy the geek (who never shuts the hell up about Star Wars because geeks are required, by law, to always talk about Star Wars or Star Trek) Rocko the blockheaded….jock? Partier? And Cal the rather oddly mannered super nice and handsome ladies man who doesn’t really act like a ladies man but does? Maybe Cal doesn’t count here.

Then there’s Jessie, the cool, down-to-earth gal who is obviously being set up as the love interest for Nitz (You can do so much better, girl), and Kimmy, his actual crush who seems like a nice enough girl just…excitable.

As the four guys are taking their own paths in college, four plots are created. Nitz realizes his high school crush, Kimmy, goes to his college and learns she’s going to a mixer later that night. He has absolutely nothing to talk about in regards to his first week of college, so he freaks out that she’ll be put off by that. Gimpy gives him a massive list of things college freshman do on their first week, and he sets out to do all of them including, somehow, buying textbooks and eating a meal in the cafeteria.

How did he get through his first week of college without buying textbooks or eating a meal in the cafeteria? The latter I can maybe excuse, but the former?

Also, it’s so dumb that he’s doing this in the first place. In any other situation, you can easily just respond to ‘What have you been doing during your first week of college?’ with ‘Just hanging out, getting settled in.’ Perfectly acceptable answer. But no, apparently it’s better to say he’s done stuff like going to an AA meeting. Yes, that’s one of the things on the list, because apparently college freshmen being alcoholics in their first week of school is common. He goes to a meeting and spends the entire time talking about wanting to impress his crush. Nice.

What’s even worse, this plot ends with him being a total dickhead. He talks about his crush problem with a bunch of different groups of people, all of whom take a deep interest in his plight. They all attend the rather sparsely attended mixer because Cal was sending invites while he was hanging out with Nitz as he went through the list.

They’re all being perfectly fine at the party and keep asking him about Kimmy, interested to see if he’ll get his dream girl. When it’s revealed that she’s not coming, he flips, tells off the people in the party who came to support him, insinuates that he doesn’t even like the friends he actually has, then storms off.

Then I guess we’re meant to sympathize with this jackass as he mopes for all of twenty seconds then reunites with his friends.

Rocko’s plot is trying to join a frat, but they don’t do hazing there. They’re perfectly willing to accept him, but Rocko wants to be hazed so he makes himself act like a complete tool all day. Rocko’s an obnoxious idiot.

Cal’s plot is very short as it’s mostly just him inviting people to the mixer and being mauled by women. He does have his own idiot moment, however, because, after following Nitz around and listening to him blather on about Kimmy, he stupidly forgets that Nitz wanted to talk to Kimmy. When she calls during the mixer, he tells her it’s okay if she doesn’t come because they have enough ladies. *huff*

Finally, Gimpy’s plot is trying to stop Rocko from joining a frat because he believes he won’t be friends with him anymore if he does. His was the most entertaining plot, but it was still pretty stupid. Also, as a Star Wars fan, shut the hell up about Star Wars. I know I already brought this up, but seriously, every other line of dialogue from his mouth was somehow a Star Wars reference.

Gimpy’s the only one attending a different school. Being the geek of the group, he attends a tech school but contacts the group frequently through video chat. Also, he and his entire group of geek friends all fit the freaky geek stereotypes to a tee. Gimpy himself looks like an electrocuted monkey.

This show did have its moments that earned a little smile out of me, but overall it was just really dull. The main characters range from unlikable to alright, the jokes range from ‘was that a joke?’ to smile-crack worthy, and I simply don’t have it in me to want to continue this series further.

I had heard fairly good things about this show, and I see the potential it has, but it never clicked with me back when I first caught it on TV and it didn’t click with me now. I can’t be the only one because the show got canceled 13 episodes in, failed to get picked back up when they gave the rights to Comedy Central and failed to do a continuation in other media such as a proposed comic or webtoon. However, to its credit, in October 2018 they did get Kickstarter funding for a movie, so we’ll see what comes of that.

The show has okay animation for an MTV/Teletoons show, and the art’s passable. The music is decent but forgettable with the theme song being performed by Good Charlotte. The voice acting is also okay. Everything is just….okay at best.

I might give another episode or two a passing watch, and maybe I’ll power through the other 12 episodes if they release the movie, but it’s a skip for now.