Megaphant: An ELF Medabot, Megaphant’s design is based on an elephant. It has an iron ball on a chain on its trunk, which it uses to flail its enemies, thick armor, and two strong shields for hands.

Digmole: A MOG Medabot, Digmole’s design is a combination of a bulldozer and a mole. Digmole’s only specialty is digging and doesn’t have much in the way of offensive capabilities.

Ikki vs. Gangsters: Winner – Ikki: Megaphant loses arm shield to Metabee and the gangster loses the right to buy the land.

Breakdown: The Screws are out training when they’re caught by Coach Mountain. He’s incredibly strict when it comes to robattles or Medabots on school grounds. If he catches you, he chastises you for wasting time with Medabots and forces you to exercise until you’re pouring sweat.

Ikki: “I mean, bringing their Medabots to school? How stupid can you get?” Nearly every character has been doing that since episode one, including you.

Metabee drops by, nearly getting Ikki the same workout treatment the Screws are getting.

Ikki: “And I heard he stopped an erupting volcano by plugging it with his butt!” The dialogue in this show is so stupid sometimes.

After discussing the legendary harshness of Coach Mountain with Metabee, Ikki tells him to never come back to school again, which Metabee begrudgingly agrees.

The next day at school, Ikki is doomed to Coach Mountain’s exercise regimen after he, along with the Screws, got less than a 30 on their latest tests.

Throughout the week, Coach Mountain continuously rides Ikki and the Screws for a bunch of honest mistakes, running them ragged until they’re unable to walk anymore…..I’m really surprised no one’s cited Coach Mountain yet. Making kids run laps because they do something bad, fine, but he’s making them so exhausted they can barely stand or keep their eyes open – and this is all because of accidents and mistakes.

This time, Ikki and Metabee spot Coach Mountain doing something suspicious. He’s dressed in dark clothing with a big wad of cash muttering that the money he has currently isn’t enough.

Ikki and the Screws try to hide out at the store to get some rest. I actually like when the Screws and Ikki hang out with each other. It’s an interesting dynamic.

Erika shows up to give them the latest scoop – a video of Coach Mountain training a Medabot. Everyone’s shocked, but they believe this is the missing piece to the puzzle of Coach Mountain’s harsh behavior. The shady characters, the wad of cash, the Medabot – the only logical conclusion, apparently, is….Coach Mountain is using his Medabot to collect their sweat and sell it to mad scientists.

…..*sigh* Okay, not only is that really dumb, but if the Medabot was the one collecting the sweat, wouldn’t they have seen it by now?

In order to get back at Coach Mountain for all of the exercising (And to get a great news story, on Erika’s end) Ikki, the Screws and Erika join forces to expose Coach Mountain.

That night, they start following Coach Mountain around town, eventually leading them to a very seedy part of the city that Sam claims is haunted. I have no way to prove this, but given that Sam is blushing here and the part of town they’re in, I’ll assume she’s actually talking about something more….adult….than ghosts. 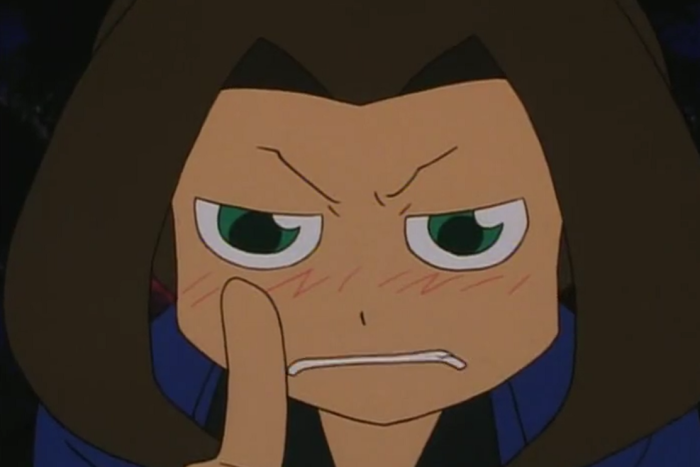 My concerns are basically validated in the next couple of scenes because they’re then lead into a alleyway where….I assume a prostitute tells them they have to be 21 to get into…wherever this is, then they run into some grabby drunk guys who try to invite them to karaoke. Those obstacles are pretty realistic, but then they come across a guy who won’t let them pass on the street unless they solve some ridiculous math riddle.

Through the commotion, Ikki and Erika are separated from the Screws, but they stumble upon a backalley robattle. Coach Mountain is battling some shady characters. I’d give their names, but even the show doesn’t bother. Even in the Medabot Index screen, Megaphant’s owner is just ‘Gangster.’…..Unless….that’s his name. In which case, your mom screwed your future over big time.

Even though they’re not, at least as far as I can see, Megaphant’s hands look so terrible that I could swear they’re digitally painted over.

He’s defeated pretty handily by Megaphant and tells the kids to run away. The gangsters state that Coach Mountain is a terrible robattler since his Medabot is garbage and he doesn’t even know how to use it properly. They also reveal that the reason he keeps robattling them is because he has a dream to turn this area into a park for the local children.

The little children from the area run to Coach Mountain’s aid, and I guess we’re meant to assume that they’ve been there the whole time but are only just now running to him because the park thing as revealed?

Little Girl: “We don’t need a park, we can play in the alley.” And *cough cough* little Timmy doesn’t need his medicine this month. *cough cough* He can hold on until you pay the mortgage on the shed we live in. *cough cough* What? If they’re going to be melodramatic, I can.

Little Boy 1: “We live around here, but there’s no park. So whenever we play outside, we get road rash.”….You…You get road rash? Is someone throwing you out of a moving vehicle during play time? What?

Little Boy 2: “And then this angel man fell from the heavens and said he’d build us a park.” PbbbbbbbbbbtttttttttttHAHAHAHAHAHAHAHAHAH! This dialogue is killing me.

Anyway, the gangsters want the land and this robattle is to determine once and for all who gets the right to buy it. This doesn’t really add up with the earlier dialogue between Coach Mountain and these guys about not having the money and them demanding money, but whatever. Also, apparently Coach Mountain has been saving up so fiercely for this park that he wasn’t able to buy good Medabot parts and has even been starving himself.

Okay, calm the drama down, guys. Pretty soon he’s going to say he’s been selling his blood and crawling on the streets for loose change. And if he’s so dedicated to this cause, why has he been wasting so much time dicking around with Ikki and the Screws, being a complete hypocrite about Medabot usage, when he could’ve been out earning more money with a second job, training with his Medabot or even asking for donations?

Erika: “Wow…that’s the sappiest story I’ve ever heard.” At least they’re self-aware, but the fact remains that this is the truth, so mocking it in-story is kinda mean. It’d be different if they were obviously hamming up a lie.

Coach Mountain: “A pink hippo slide….little horsies on springs….A swing made out of an old tractor tire….My dream is slipping away!” I honestly can’t tell if you’re trying to be funny or are going way overboard with the sympathy angle that you don’t get how corny this dialogue sounds. Either way, this is just goofy.

Angered at the gangsters for stealing Coach Mountain’s dream, Ikki and Metabee step up to challenge them instead…..Although….I don’t really get what the gangsters get should they win, besides a piece of Metabee.

Also, the gangster’s voice is just terrible. I mean, pretty much all of the voices in this show are terrible, but this guy is something else. He’s just chewing up the gangster angle so much I’m surprised he’s not going ‘Nyah, see?!’

Metabee tries shooting up Megaphant, but his shields keep blocking his tracks, his only weak spot, and he has thick armor everywhere else. No only that, but they’re on very sandy terrain, which is great for Megaphant but terrible for Metabee. Ikki commands him to run over the back of a nearby gravel mound. Flying off of the mound to attack Metabee, Megaphant’s tracks are finally exposed from underneath, giving Metabee a chance to attack. He destroys his tracks and bombards him with missiles. The victor is Metabee.

The gangster falls in defeat and Ikki and Coach Mountain have an awkwardly pseudo-romantic tearful embrace.

The next day, Coach Mountain is back to being a dickwad. He’s punishing the kids for something they did outside of school, which is ‘playing outside at night.’ So you don’t give a shit that they saved your precious park? Nice.

This episode is bad, but for different reasons than the previous two episodes. For starters, Ikki and the Screws are actually in the right this time. The Screws were only in the wrong for practicing their robattling on school grounds. Everything else was an accident, yet they kept getting run ragged Coach Mountain of Shit.

I was especially angry that Ikki saved his park for him and he STILL acts like an unfair twat and punishes them all again.

Not to mention his utter hypocrisy for seemingly hating all Medabots yet secretly having one of his own. I wouldn’t be SO bothered, if not for the fact that he was chastising the Screws for training their Medabots, too, when, again, he was doing the same. We don’t even get an explanation as to where he got this Medabot or why he doesn’t hate this one when he seemingly hates all others.

The first half is really repetitive, boring and irritating, while the second half is just confusing. I get that this is supposed to be some redemption for the guy, but the tone is really screwed up. They acknowledge that this park stuff is cheesy, but we’re supposed to be taking it seriously. They ham up the sob story dialogue like crazy, but the stakes for Ikki’s robattle are supposed to be high.

It’s hard to take any of this seriously anyway with such a cartoonish over-the-top 1950’s-esque gangster character, who doesn’t even have a name, being the enemy. His Medabot is pretty cool and powerful, but that’s about it.

The only thing I liked about this episode was Ikki teaming up with the Screws, just because I find that to be a neat dynamic. Everything else was terrible.

Next episode, Ikki and Erika investigate rumors of a Legendary Medafighter at the local private school.