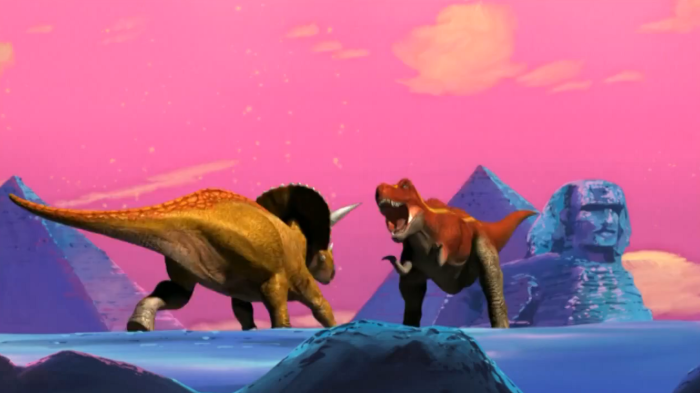 Plot: Rex’s father discovers more Dino Cards. While waiting for them to arrive, a spinosaurus emerges in Egypt. Since Max is the only one with a stone and a dino, he’s is the only one able to transport himself to Egypt through use of the Dino-Holder. However, the Alpha gang has their sights set on the spinosaurus as well. Did Max and Chomp bite off more than they can chew?

Breakdown: I apologize for that pun, and this episode is pretty boring. Second episodes are usually just about establishing excess stuff that they weren’t able to establish in the first episode. The other two team members need dinos, we need to establish more things about the universe, and the Alpha gang needs a bit more firepower to stay on even ground with the D-Team. Most of the episode is either recapping stuff we already knew, talking about nothing or quickly spewing out exposition.

All you really need to know is now Rex has a carnisaurous named Ace and the power of wind, and Zoe has a parasaurolophus, which is way too hard to pronounce and spell, named Paras and the power of nature. Zoe’s move card is also a healing ability. So yay, more female characters relegated to being support/healers! Whoo.

The Alpha Gang also caught the spinosaurus to make their numbers a bit more even, and Dr. Z fabricated a move card for the T-rex.

…..Oh and the D-Team is also massively stupid and uncaring. First, Max doesn’t notice nor care that Rex and Zoe didn’t teleport to Egypt alongside him. They could be dead for all he knew, but he doesn’t even bat an eyelash.

Second, they’re specifically fighting in the ruins of ancient Egypt because the setting makes for a better battle. And just in case you’re wondering, yes, they do flatout destroy some of the monuments. Specifically, they beheaded the sphinx and they put a massive dent in one of the pyramids. The kids don’t notice nor do they care.

Third, after they’ve destroyed parts of what made Egypt so magnificent and fascinating to begin with, they decide, after the battle, that they’ll stay in Egypt for a week and see the sights…..the thoroughly destroyed sights. Oh and Dr. Taylor and Reese also don’t care that they both destroyed some of the most beloved ancient artifacts in the world (They’re goddamn paleontologists) and are taking an unsupervised week-long trip in Egypt on the fly.

Even if they’re poorly CGI’d representations of the monuments, it’s really hard to root for the protagonists when they flippantly destroy some of the coolest remaining parts of ancient Egypt. They don’t even properly react when it happened. They just throw dinosaurs into them and then YAY we win!

Final Notes: Can someone tell the writers so stop trying to hard when it comes to Dr. Taylor? They are going to ridiculous lengths to make him seem like a wacky off-the-cuff character.