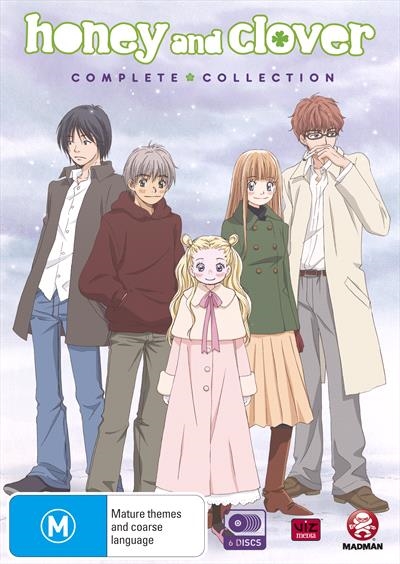 Plot: A group of starving destitute college students try to live their lives as they struggle with the hardships of blooming love.

Breakdown:……You know those shows that earn nothing but critical praise and when you watch it you just….don’t get it?

Honey and Clover is one of those shows to me.

Maybe this is just a bad show for Episode One-Derland….but…I don’t get it. Every review I find of this show has practically nothing but good things to say about it, and I couldn’t get a response above anything but an ‘okay’ while watching this first episode.

Seriously, the few things I could dredge up that had bad things to say about this series were just met with posts that amounted to, putting it politely, ‘you’re wrong. It’s good.’

I know josei shows are slow, but my problems run deeper than that.

This episode seems to give off the illusion that all of the main characters are being properly established, but I can’t remember most of them well enough to build a solid foundation. Half of the cast I’ve relegated to ‘desperate starving college student.’

The main-main character seems to be Yuuta, but outside of being a bit of a buttmonkey, he’s not very characterized so far. Takumi’s the straightman and that’s about it. The most prominent character so far is Shinobu – a strange guy who disappears for weeks on end, comes back in a daze with an armful of food and a big wad of cash. No one knows where he goes or what he does when he’s gone. He’s the most entertaining character so far, but it’s not really enough to save the cast.

Other than that we have Shuu, and his cousin’s daughter, Hagumi.

It’s here where I kinda started pumping the brakes. I didn’t think I’d be thinking this while watching a josei show, but here goes….Why are these college students falling in love with an eight year old girl?

Hagumi is one of those characters who, we’re told, is 18 years old, but screw you, no she’s not. She is clearly an eight year old girl. She looks eight, she dresses like she’s eight, people treat her like she’s eight – she’s eight.

It was very unsettling to have her first proper appearance be accompanied by a very long pan shot down the right side of her body as a flower fell and Yuuta looking on in wonder. It’s even worse when Takumi starts doing it and it keeps happening – that same glittery sparkly ‘I’m in love’ effect for a girl who looks like she’s missing nap time.

It’s not even just that she looks eight, either – she acts like a little kid too. She has yet to say barely a word the entire time, choosing instead to mimic Heroine from Amnesia and just respond to everything with little sounds and a blank look of idiocy on her face. When she does talk, she speaks in a very timid whisper.

Her cousin also does nothing but treat her like a kid. He talks to her like she’s a toddler, calls her adorable and points out how cute she looks while struggling with a big tea pot. She doesn’t even get mad when people do this, she just takes it. The biggest reaction we got from her was her shaking in nervousness as Shinobu gave her a leaf and started taking pictures of her…..There’s no way you’d think this girl’s 18 unless someone flatout told you, which they did.

This isn’t a very strong basis for a romance plot either, because it’s literally love at first sight for both Takumi and Yuuta, and the only backing behind the love is ‘Wow, she’s cute.’ I think we’re at a point in time where these types of romances shouldn’t fly. Shinobu also falls for her at first sight, but his is less obvious and somehow more disturbing because he clearly does that sparkly stare thing then follows it up by telling her to hold up a giant leaf and take a bunch of pictures of her because she’s adorable.

I just can’t focus anymore. Am I being the insensitive one here? There are diseases that make you look pre-pubescent, and those people should be free to live their own lives and fall in love with whoever they want, but this is love at first sight with a girl who looks like she’s eight. She doesn’t have any sort of medical condition to make her look young or a mental condition that makes her act infantile. Even her Wiki says she’s simply short, designed to look like a child and has the face of a doll.

The show’s dialogue is also a bit exposition-y. Who feels the need to point out such specific things about characters when the other characters seem to know all about them? I swear, they pointed out Shinobu’s penchant to go off on these weird adventures three times.

The opening theme is….kinda weird. The music’s grating and the animation behind it is claymation foods where the final shot is of crabs that turn into a crab hand and try to grab you….The ending is alright.

There’s some decent comedic moments, and I didn’t get annoyed by anyone, but I really didn’t get what the big deal was nor could I ignore the squickiness of Hagumi’s whole situation. If I’m just misunderstanding something that they’ll explore later, I’m sorry, but on an intro episode basis, this is off-putting.

This series has such high praise that I don’t want to drop it entirely, but my first impressions of it were not really good. I guess I’ll just pick it back up and watch an episode or two whenever I feel like it. Hopefully, I will change my mind fully as time goes on…..Don’t think I’m going to get over the Hagumi thing, though. Am I overreacting? Am I missing something? I have to be, right?