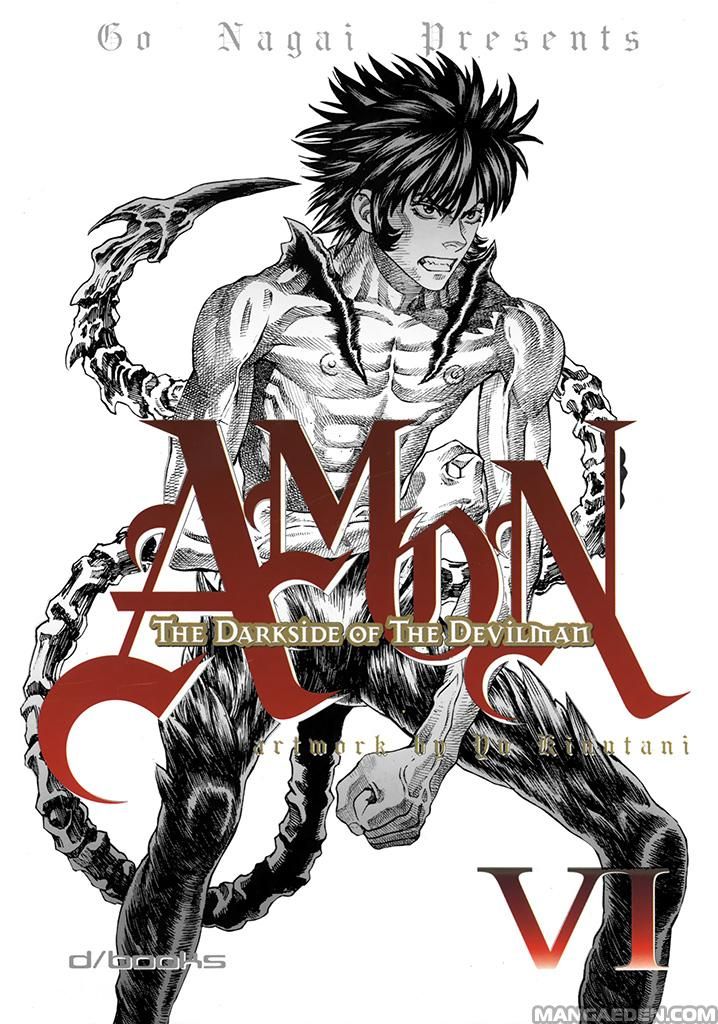 Plot: As the apocalypse surges, Akira struggles to maintain his resolve, and Cadney rears up for his final assault. Meanwhile, the demons plot to finally break Akira by taking away the one thing in this world that gives him hope.

Will anyone be left standing?

The biggest buildup so far has been Cadney, but since he had no role whatsoever in Devilman, we can assume his role here is nothing to write home about.

And it’s not. It’s incredibly disappointing.

We learn that Cadney was present at the Black Sabbath party, but he was the only one, besides Ryou, to keep his humanity during the whole thing. He huddled up on the floor and believed him to be the only one to truly be a self-controlled devilman since even Akira was losing control back then. However, it’s revealed that Cadney’s demon side is really just fragments of Amon, somehow.

He starts to lose control of his demon powers and tries to assimilate with Amon. Manjirou, who had been assimilated last volume, suddenly pops up and sets Cadney on fire as his final act. That was a pretty nice twist for such a minor character.

Oh yeah, Cadney latches onto Amon later and reanimates Miki’s body to taunt him only to be decapitated a page later. Pretty pointless.

Another new scene we get is Akira fighting Amon, literally. They split off from each other and have an evenly matched fight. It’s pretty awesome, but really short lived because Ryou interrupts.

For anyone who has never read the original Devilman, I’d imagine this final chapter would be really weird. We gear up for a final showdown between Ryou/Satan and Akira/Amon, but then we cut away to the very start of the story when Ryou’s saving Akira from Dosuroku and his gang back when they were thugs. As he did then, he calls himself crazy and the story just ends. If I was reading this without having read Devilman, I’d be insanely confused, and I’d feel very ripped off.

To recap the ending of Devilman, there’s a massive battle between the demons, humans and devilmen, particularly Satan and Amon, where eventually everyone dies. Ryou/Satan and Akira/Amon are the only ones left, but we see that even Akira’s dead and Satan’s left all alone only to be destroyed when the angels of heaven come down to wipe out every living being left on earth, including the demons, and supposedly restore humanity.

They could’ve redone that, but I dunno. Maybe they felt it redundant?

Nothing else of real note happens that didn’t happen in the finale of Devilman.

When all is said and done, the first half and second half of this entire series seems to be awkwardly stitched together. Some of the additions, due to the constraints of the original series, were just disappointing, particularly Cadney in his entirety. However, each story on their own, while sometimes being difficult to follow, particularly if you’ve never read the original manga (and sometimes if you have read it) is pretty good and adds a fair amount of development and interesting scenes that were missing from the original Devilman.

The art is both beautifully and grotesquely detailed, and there are many scenes that look much better than the original series ever did. It’s not as good as Devilman, but it’s a very solid entry in the franchise.

Recommended Audience: There’s damn near everything outside of sex. There’s full-frontal nudity, though the genitals are never really drawn (nor are they covered usually, though) A lot of blood, gore, violence, and mature themes spread throughout the entire series. 16+