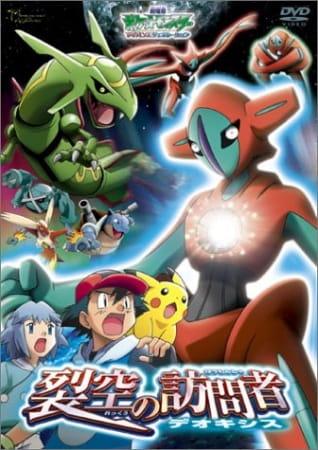 Plot: A mysterious meteor lands on earth near the North Pole containing the alien Pokemon, Deoxys. It tries to take a strange stone from deep within the snow, but Rayquaza, angry at the intrusion on its territory, violently attacks Deoxys. Rayquaza seemingly kills Deoxys before returning to the sky.

Four years later, Deoxys regenerates its body and continues its search for the stone, and Rayquaza wants to take it down once more.

Meanwhile, Satoshi/Ash and the others meet a boy named Toi/Tori who suffers from a paralyzing fear of Pokemon after a traumatic experience with them as a small child. They try to help him get over this fear by getting him accustomed to Pokemon, but they find that helping Toi is a lot more difficult than they first thought.

From all I can find, this movie is a very loyal translation, if not the most loyal adaptation we’ve seen so far, so I don’t believe this requires a step-by-step analysis.

Instead, let’s review this in a chunklet format – by 20 minute chunks. 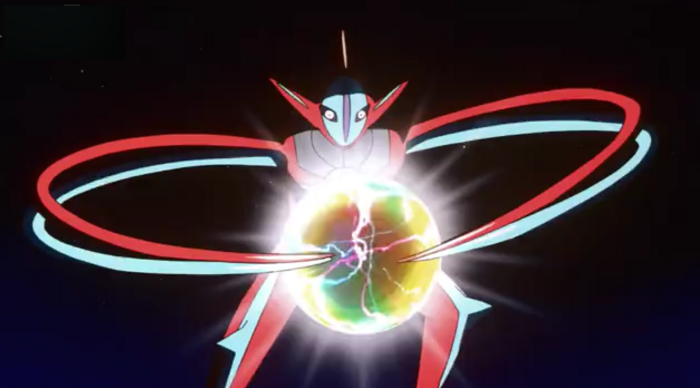 The ‘World of Pokemon’ opener is actually the same dialogue we’ve come to know instead of trying to shoehorn in stuff about the Pokeball itself.

Just now noticing that the animation on the Jolteon in the opener with the herd of Pokemon running is so jarring I’d even say it’s incomplete.

I don’t have the Japanese video track so, sadly, I can’t compare the title screens.

Tory’s Japanese name is Toi. Also, his last named is Rondo, which may be accurately-ish turned into Lund.

Oh god, the little cube robots are just as annoying here as they were in the dub…. Satoshi tells Toi he only wants to battle as they exit the elevator whereas Ash just said ‘Wait, we just wanna…’ which makes it a little more understanding in the original as to why this guy just shoved these kids into the Battle Tower system….the system still should have recognized that Toi’s not a Trainer, though.

Likewise, Hitomi/Rebecca says Satoshi beat her to the arena, not that he cut in front of her. Wording is everything, 4Kids.

I have no idea how I got through Movie 06 without noticing this, but Masato’s/Max’s Japanese voice is terrible.

Satoshi actually acts like kind of a jerk when he takes the reigns in the match. Whereas Ash tells Tori not to worry about battling, Satoshi says, in a pretty rough tone, ‘I’ve had enough of this! I’ll do this alone!’ Dude, chill out. He said he’s not a Trainer and yet you pestered him to battle all because you were way too hyped to battle someone you met ten minutes ago. Is it really a surprise he has no idea what to do?

Okay, so we get a bit of a trade off here. Haruka is a little more rude to Shota than May is to Sid, and Takeshi is much less of a pushy controlling asshat in that one scene with Hitomi than Brock was with Rebecca.

Obviously, the insert song during the little Pokemon party is completely different from the dub’s. And….this song really is just bad. I feel like this song should be in some moe shoujo anime, not Pokemon. The melody is okay, a little toe-tapping, but the lyrics and vocals are just….gah. Not to mention, with all the talk of stars, this song seems more suited for Movie 06…. Nothing of note, really. ……Excuse me, Mitch, gonna borrow a joke for a second.

For the record, May merely said that she’d never take escalators for granted again.

Audrey and Catherine, Rafe’s sisters, keep their original names. Though I have to wonder why they have English names and Ryu’s is very obviously Japanese. 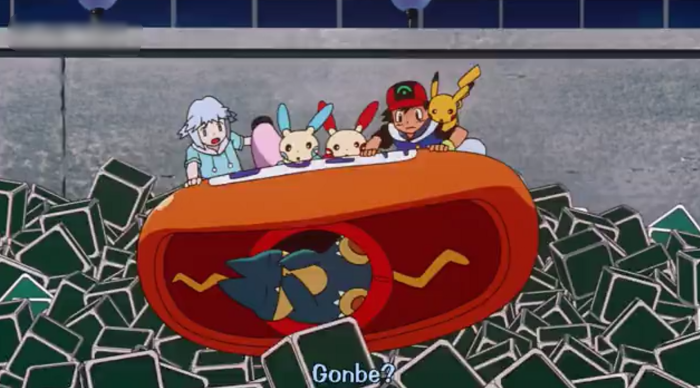 Satoshi: “Professor Rondo, Toi’s not the only one who can save the city. I’m here too!” You really can’t let anyone else have the spotlight for five minutes, can you? This is Movie 04 all over again.

As expected, the end credits song is just the insert song only longer, and somehow it’s even worse in the extended version. The added lyrics are even more cutesy and lame and, while it’s not horribly repetitive, it still is as such.

This movie is damn near identical to the 4Kids version barring some minor dialogue changes that both make the script better and worse, so it evens out. The music is worse thanks to the lone vocal song, but then again the video isn’t cropped so that also evens out.

Recommended Audience: Same as the dub, 6+