Plot: Kimiko and Jack Spicer are in a Xiaolin Showdown for the Monkey Staff, a Shen Gong Wu that can turn people into monkeys. Jack is breezing through while using his Shen Gong Wu, the Jetbootsu, which allow him to defy gravity and walk on walls. Kimiko, however, only has the Fist of Tebigong, which doesn’t lend any help to their current climbing contest.

She tries to use it to knock Jack down by punching into the mountainside, but since his boots allow him to defy gravity, he doesn’t move an inch. Instead, it causes a rockslide that knocks Kimiko down the mountain, allowing Jack to win the Showdown, the Monkey Staff and the Fist of Tebigong.

On the way back home, Omi tries to ‘comfort’ Kimiko by saying she had no chance anyway since she’s a girl and was competing against a guy. Clay says the real reason behind her loss is her quick temper. The others start taunting her when they’re interrupted by Dojo detecting a Shen Gong Wu – the Tangle Web Comb, which allows the user to wrap up their enemies in web. They’re in luck, because the Shen Gong Wu is right below the boat. Kimiko dives in and retrieves it to make up for the ones she just lost.

Still being mocked at home because her new Shen Gong Wu is a comb (and combs are a ‘girl’ thing) Kimiko tries to impress the boys by showing off her skills with the Tangle Web Comb only to get wrapped up in the webs herself. As she struggles to free herself, the boys leave to snoop through her things.

Master Fung arrives and tells her the real reason the Comb isn’t working for her is because it requires total focus. To help her understand her level of focus, he asks Kimiko to pour a cup of tea from an incredibly heavy pot without spilling any. She does the task quite well until Raimundo, Clay and Omi walk in the room with Clay reading her diary, Raimundo messing with her PDA and Omi eating her lipstick. They continue on with the sexist comments and mocking, telling her to serve them tea too. She struggles through the pouring, but gets so angry at Omi’s next sexist comment that she breaks the pot.

Meanwhile, back with Spicer, he’s loving the Monkey Staff, but finds that he’s slowly getting more and more monkey-like the longer he holds it. A teenage girl enters his lab, having sneaked out of his parents party upstairs. She likes his evil lair but he demands that she leave. Just then, Wuya senses the next Shen Gong Wu – the Golden Tiger Claws, which allow the user to teleport anywhere they please.

The Golden Tiger Claws are inside the Emperor’s palace. To get in, they need connections, and Kimiko’s dad has plenty of those. He grants them access on one condition – they all need to be wearing formal robes, and Kimiko needs to wear an elegant kimono. She begrudgingly agrees, and they enter through a secret passageway that leads to an underground cavern.

Jack Spicer has beat them to the area but not to the Golden Tiger Claws. Jack distracts the group with his Jack-Bots so he can get to the Claws first. Kimiko doesn’t fall for the distraction, however, and both she and Spicer get to the Claws at the same time, starting a Xiaolin Showdown. The game? A race across twin bridges.

Jack bolts ahead with his newfound monkey abilities, and Kimiko trails behind due to the constricting nature of her kimono. She’s able to move a little better when she throws off her wooden shoes, but she still can’t even start to keep up with Jack. She tries to use the Tangle Web Comb, but her lack of focus makes the Comb backfire on her again. She realizes that, the angrier she gets at Jack’s laughing, the tighter the web constricts. She clears her mind and finally focuses, allowing her to snatch the Monkey Staff from Spicer. With the agility given to her by the Monkey Staff and the abilities of the Comb, she is able to grab the Claws before Spicer, winning the Showdown. Omi gains a newfound respect for women, and she states that she expects more respect from the whole group.

Back with Jack, he’s getting chewed out by Wuya for losing another Xiaolin Showdown when the same girl from earlier enters dressed in a Catwoman-like outfit and introducing herself as Katnappe. Jack sics his Jack-Bots on her and she easily defeats them. Completely impressed by her skills, Wuya recruits her to help them gain the Shen Gong Wu.

Breakdown: This episode was yet another where the message is shoved in our faces from the very instant the episode starts. Kimiko’s a hothead. She needs to learn to calm down. Wonder what will happen in the rest of the episode.

And, really, was getting pissed off that Omi was telling her that girls are not as skilled as guys, are meant to serve tea and belong in the kitchen an example of that? Fuck off. I know Omi is basing his logic off of ancient mindsets, but no one tries to teach him otherwise or correct him on his behavior. When he says this stuff, Clay just says ‘Go easy on Kimiko.’ Master Fung doesn’t even stop them from being sexist assholes. He just lets it happen. 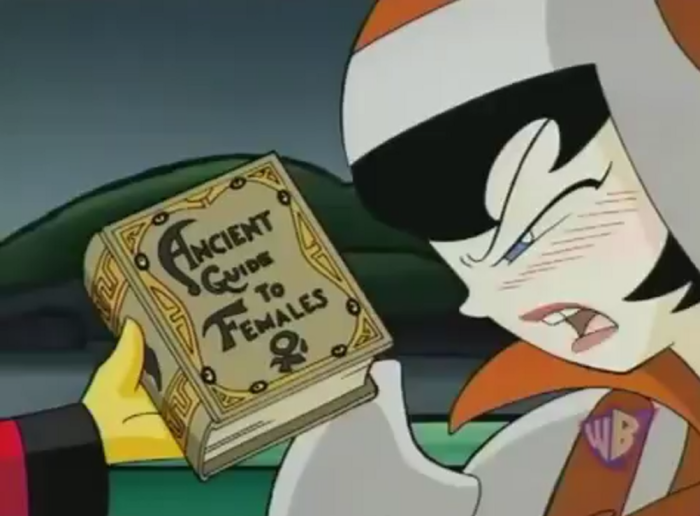 I get that the lesson is to keep calm no matter what is being thrown at you, but this still seems like it’s overkill and unnecessary.

Not to mention that Kimiko didn’t lose the first time because of her temper – she lost because that was literally the only option for her. It was a last-ditch effort and it failed. What else is she supposed to do in a climbing race with the Fist of Tebigong?

I’m also getting really sick of how much these guys do nothing but make fun of and disrespect each other. There’s friendly jabbing and then there’s 95% of their scenes together being mocking, taunting and jackassery. The first thing they do when Kimiko wraps herself up in webs is go snooping through her stuff and leave her there. And they don’t just go through her things – they take her PDA and use it, eat her lipstick and read her diary. 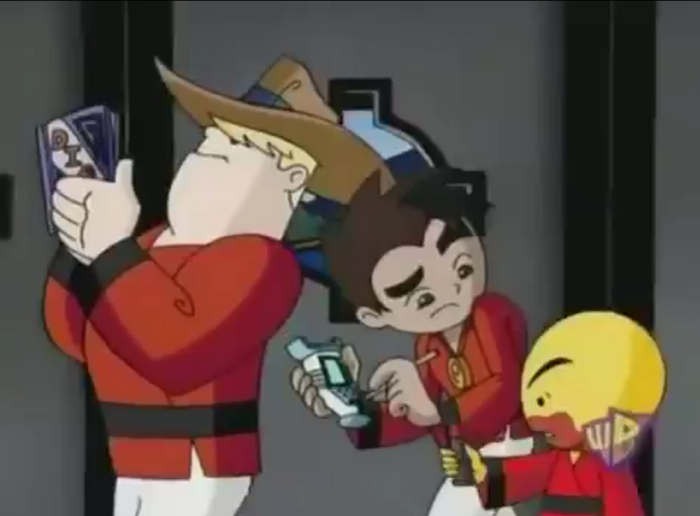 You want to know something really weird? The one guy not being completely douchey today…..was Jack. It’s expected for him to be mocking and taunting, especially during the Xiaolin Showdown. But his mocking is mostly just laughing at Kimiko and calling her out on her temper. And he never once says a sexist word – even in spite of interacting with another female character who annoys him (Katnappe).

To be honest, I still don’t see the major problem with her temper. She’s acting no more impulsive and easily aggravated than Raimundo or Omi. Anyone would get pissed if they had to constantly be treated like crap and listen to their so-called friends spout out a never-ending stream of sexist comments. If anything, she has a problem with her ego…..which is also a problem shared with Raimundo and Omi.

The Xiaolin Showdown this time also didn’t make much sense. Each time that one of them has gone into a Xiaolin Showdown, they instantly get changed into their warrior robes. Here, Kimiko stays in her kimono purely so they can slow her down in the race and get a plot device started. They try to make up for the mocking and crap by having the boys start a bet on when Kimiko will find her focus, making it seem like that in itself is mocking her, but then it’s revealed that they, or at least Raimundo, bet that it would be very soon…..but no. No. I don’t buy it. Also, Omi never apologizes for what he said. He just said that her actions in the Showdown taught him a lot about the strength of women.

I do indeed get the irony in that it seems like I’m losing my temper right now.

The only redeeming aspects of this episode are Kimiko getting her first show of badassery and monkey!Jack.

Next episode, Katnappe goes on a crime spree after acquiring the Golden Tiger Claws from the monks.