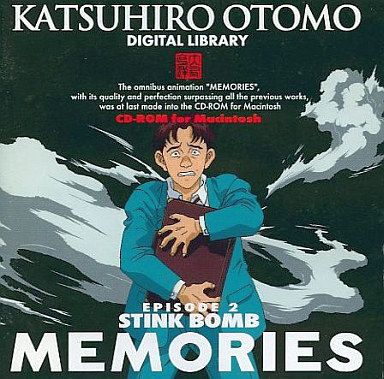 Plot: Nobuo Tanaka has a cold that he just can’t shake. He goes to the clinic to get a shot for his illness, but nothing seems to help. Some coworkers at the pharmaceutical development company in which he works suggest that he try an experimental drug for colds that their associate has samples of in his office. After he takes one, he falls asleep on the couch in the break room. Hours later, Nobuo wakes up and finds everyone in the building has passed out.

After triggering the emergency accident alarm, he’s contacted by the higher ups at the company who tell him to gather the pills and some documents and meet them in Tokyo immediately.

The drug that Nobuo took was actually a secret experimental drug that they were contracted to make by the government to use as protection against biological weapons, but it seems to have counteracted badly with the shot he received earlier. While this seems like an easily fixed mistake, it’s soon discovered that the mass wave of unconsciousness is caused by a smell Nobuo is giving off, and it’s so strong that he leaves a wake of unconscious bodies wherever he goes.

Breakdown: I kept hearing about how the other two episodes of Memories were nowhere near as strong as the first entry, and this episode supports that.

I don’t know what to make of this segment, really. They don’t even tell you if the people are falling unconscious or dying. The episode is mostly comedic, especially if the music is any indication, so I’d assume they’re just passed out, but they never say one way or another.

That’s one of the reasons why this segment feels like it doesn’t have much tension. People were dying and hallucinating in the first episode. They were locked in a mysterious haunted hologram within a living pile of space debris, tormented by images of their past and warped visions of their desires, luring them into doing what a shadow of a ghost wanted them to do.

This one has people supposedly just passing out due to the stank of a guy’s chemical sweat. It’s still a crisis, and who knows when or if these people will ever wake up, but it still doesn’t have anywhere near the level of impact that the first episode had, which is weird considering the magnitude of attack with which they chose to strike down Nobuo.

It is beyond insane what they do to try to kill this one person. Granted, they can’t get near him due to the stench, which is so strong it can pierce through gas masks and ventilators, but then they have to up the ante. The stench is somehow so powerful that it even affects electronics. They either go haywire or become disabled. Snipers in the area couldn’t get a clear shot because their electronic scopes were screwing up.

Then they try even more powerful munitions like a slue of attack helicopters with missiles, ground to air missiles, tanks, machine guns, battleships, even liquid nitrogen machines, and they all fail to hit him. You’d think one would hit close enough to kill him, even if it wasn’t a direct hit, but nope. The worst he gets is a little frayed jacket and some dirt on his pants.

At a certain point, you’d think they’d realize that the smell is causing the electronic disturbances and stop attacking him with anything that relies on anything remotely electronic (they do have non-electronic sniper rifles, guys) but nope. Up until the very ending they’re using electronic devices and machines, mech suits no less, to contain him.

By the way, during this whole onslaught, Nobuo’s riding a motor scooter….Yep. It craps out near the end, but he rides it the whole way without issue, and it’s more implied that the scooter probably died from the damage it received during the attack than the stink off of Nobuo.

They also realize something else about this chemical early on, something that was told to them by the company’s higher ups – the stink gets worse and more powerful as Nobuo gets increasingly stressed and starts to sweat more. So they decide scaring the living hell out of him by confronting him with a darkened sky of attack helicopters and missiles is a great idea. Good job, guys.

No joke, this whole thing might’ve been resolved with gentle words, some kindness and care, but they’d rather blow shit up with complete disregard as to the innocent people they might be killing in droves in the process.

Also, for some strange reason, this smell prompts the spontaneous growth of plants and flowers. They never say why.

The ending is very predictable. It seems like it’s an anti-climax because Nobuo gets so panicked after being cornered by the aforementioned mechs that he causes a massive breakdown in electronics in the area. They quick cut and show that Nobuo was…killed? They find his jacket, and that’s all we see. They also make it very clear that these mech suits, for no reason, have the ability to tint the helmets and mask the person inside.

Everyone’s clamoring after stopping the stink, and they bring in the American soldier in the mech suit to congratulate him. He hands over the suitcase with the sample, clears the tint from the helmet and reveals that he’s actually Nobuo and the stench is still with him, just contained in the mech. Everyone panics as Nobuo ejects himself from the mech suit and releases the stink, supposedly damning everyone in the world to coma-dom.

Not only is this ending predictable, because otherwise it would be anti-climactic and make no sense, but it also….makes no sense.

If Nobuo had a massive electronic-killing panic attack, how did the mech still work after the breakdown? How did it work with him inside it?

How did no one get a confirmed kill? They really just saw his jacket and were like ‘he ded’?

I assume his breakdown knocked out at least one of the mech guys so he could take his suit, but why did the other mech guys get away unscathed? How did they not notice one of their own wasn’t who he said he was?

How did Nobuo get all the way into the command center without alerting anyone to who he was? Why did they not force him to take the suit off before going in? Or at least clear the tint? How did Nobuo know how to use the mech suit?

Why did it never occur to him that the smell was coming from him? You can literally see the gas emanating from him.

Why did he completely ignore the advice of his grandma? She’s yelling to him from a helicopter begging him to go to the mountains instead of Tokyo, and it’s like he never even considers it. Why even have that scene in there then?

All in all, this is an interesting concept, but it’s one of those movies where I can’t help but be put off by how little sense it all makes. The tone is silly but is still trying to seem like there’s a lot on the line. Nobuo’s a dumbass, but he’s not entertaining enough to be memorable. It’s just a confused movie.

Additional Information and Notes: Memories – Stink Bomb was directed by Tensai Okamura, who also directed Kikaider, Wolf’s Rain and Blue Exorcist. It was written by Katsuhiro Otomo, who also did the screenplays for Metropolis and Steamboy. It was produced by Madhouse, the one segment of the movie not to be produced by Studio 4°C, and it is currently licensed in the US by Sony Pictures Entertainment.

Recommended Audience: If these people are dying, then there’s mass murder/death. Lots of ridiculous explosive violence, but no blood. 8+