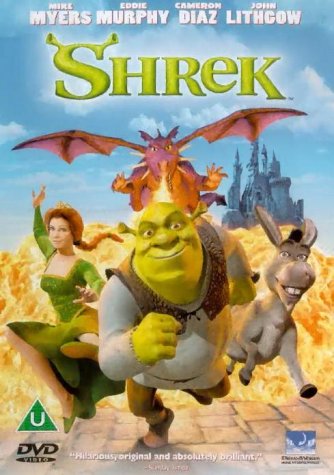 Not to mention this movie has dated itself quite a bit. It’s not loaded with pop-culture references, but we all know how Smash Mouth has become forever linked with this movie. There’s also a song on this by Leslie Carter, sister of Nick and Aaron Carter, and the end credits include a Baha Men song….the ‘Who Let the Dogs Out?’ guys have a song on this….Not to mention that in the Shrek in the Swamp Karaoke Dance Party mix, one of the songs they sing is actually ‘Who Let the Dogs Out?’

The music, despite some odd choices, is pretty good and fitting. ‘My Beloved Monster and Me’ is particularly good. That song that plays as Fiona and Shrek eat dinner is also very nice to listen to. I also absolutely love ‘It is You I Have Loved (All Along)’ and it’s a song I still listen to frequently.

The voice acting is fantastic. Mike Myers as Shrek is a perfect example of a character brought to life through their voice. I know Chris Farley was the first voice actor for Shrek before he tragically passed away and was unable to complete recording, but he did a marvelous job standing in.

Recommended Audience: There is some crude humor as well as adult jokes, but the crude humor isn’t too offensive for little kids, and the adult humor is usually way too subtle for kids to catch onto. There’s only some minor swearing, mostly in regards to saying the word ‘ass’ and usually referring to or talking to Donkey. 10+