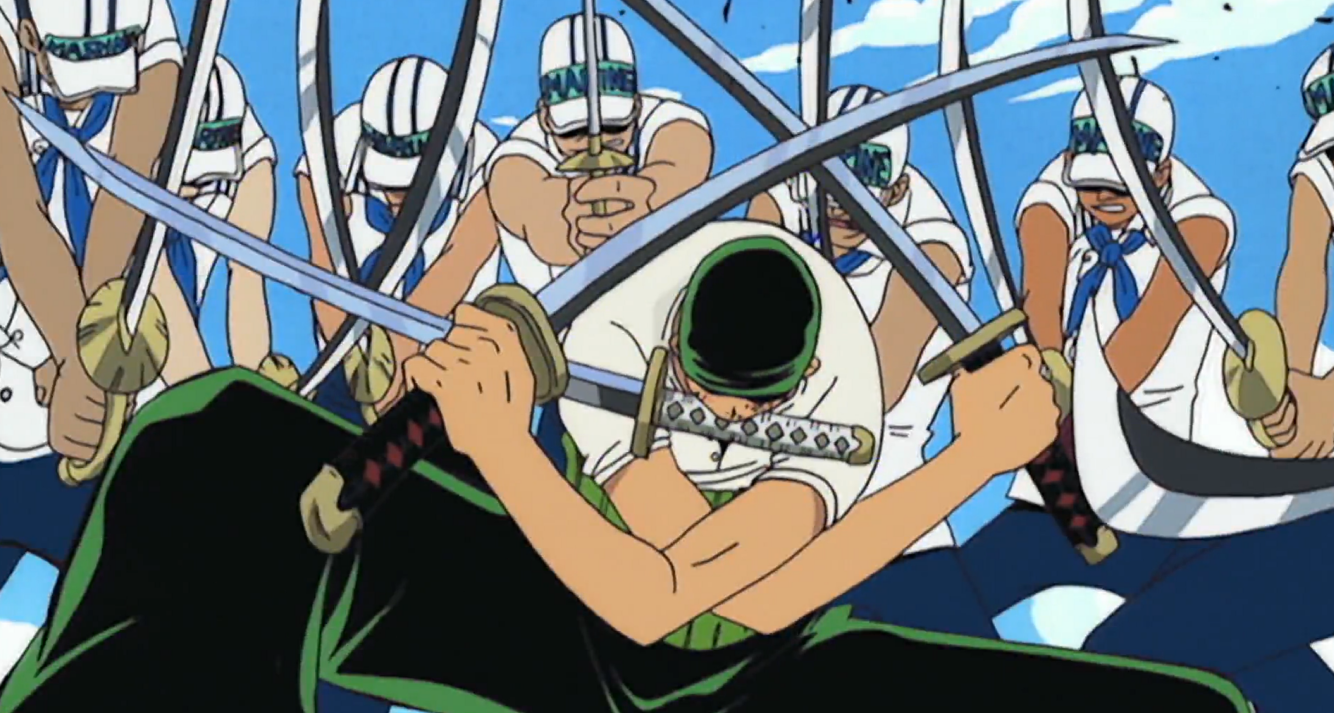 Plot: Zoro’s still in danger of getting executed, but Luffy’s not giving up yet. He’s retrieved Zoro’s swords, and now it’s time to take down Helmeppo and Morgan! 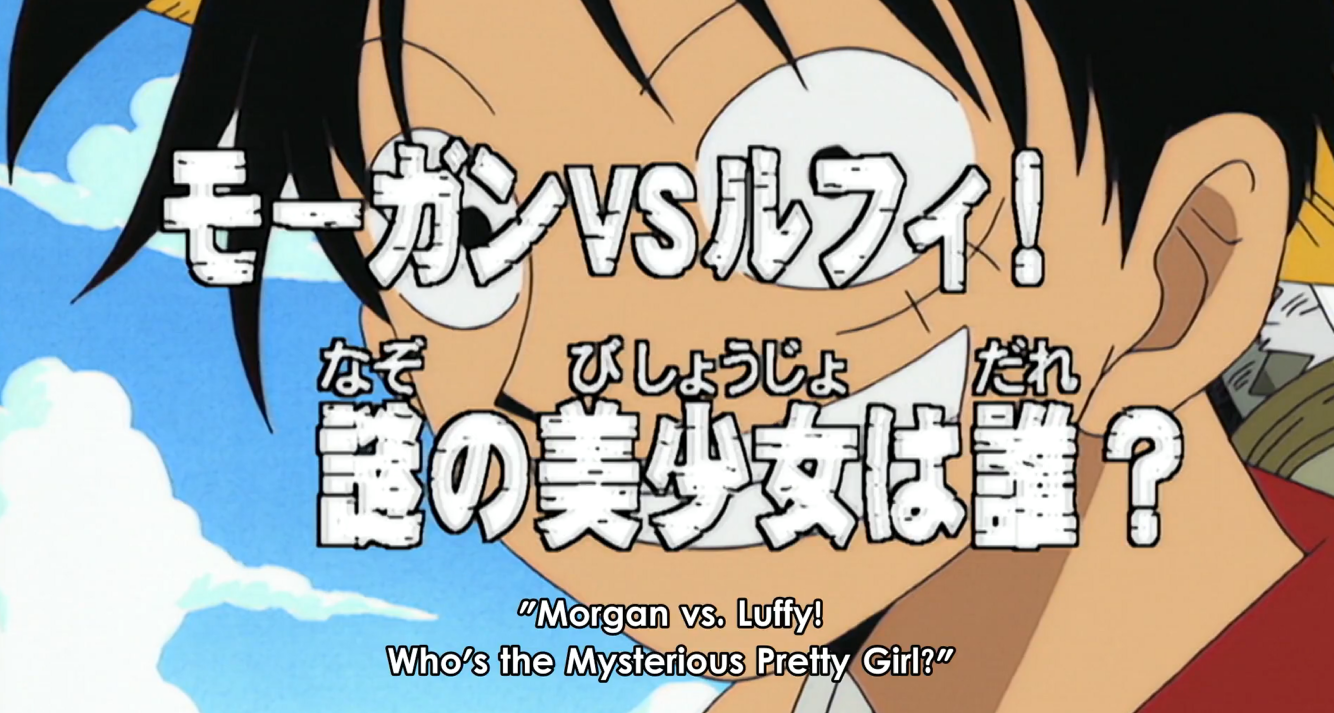 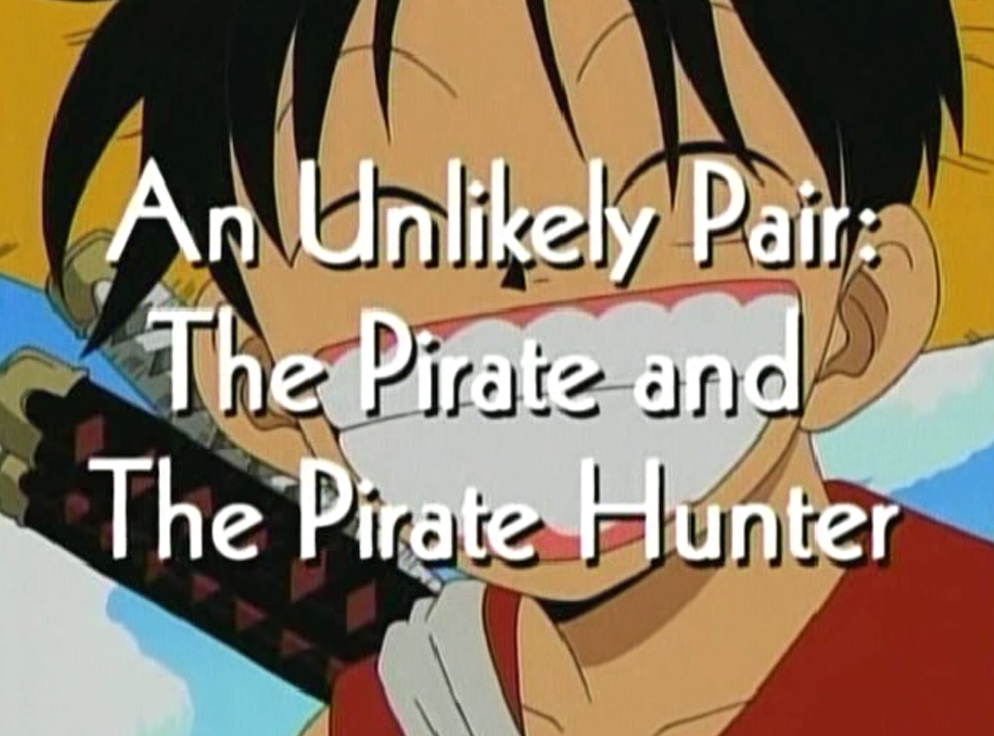 They edit out Coby explaining to Zoro that Luffy’s serious about being King of the Pirates and that he believes that he can find One Piece.

With all of the editing out of anything Japanese, I’m surprised that they actually left in the name of Zoro’s three sword style – Santoryu.

In the original, the fruit that gives special powers is commonly called the devil fruit. In the dub, it’s almost always called the forbidden fruit or the cursed fruit.

One of Morgan’s sailors asks if Morgan means Adam and Eve when he mentions the cursed fruit.

4Kids took the scene of Coby talking that I mentioned was removed before to give Coby a throwaway line after Morgan’s explanation of the cursed fruit. In the original, we cut straight to the scene that follows, which is Luffy trying desperately to untie Zoro.

In the original there’s a shot of Coby cringing in fright at the impending attack. The shot then turns into a negative and we get some silence before cutting to Zoro’s scene of him rescuing them all. In the dub, the cringing, negative shot and the silence is all gone. They cut so quickly that it’s jarring. 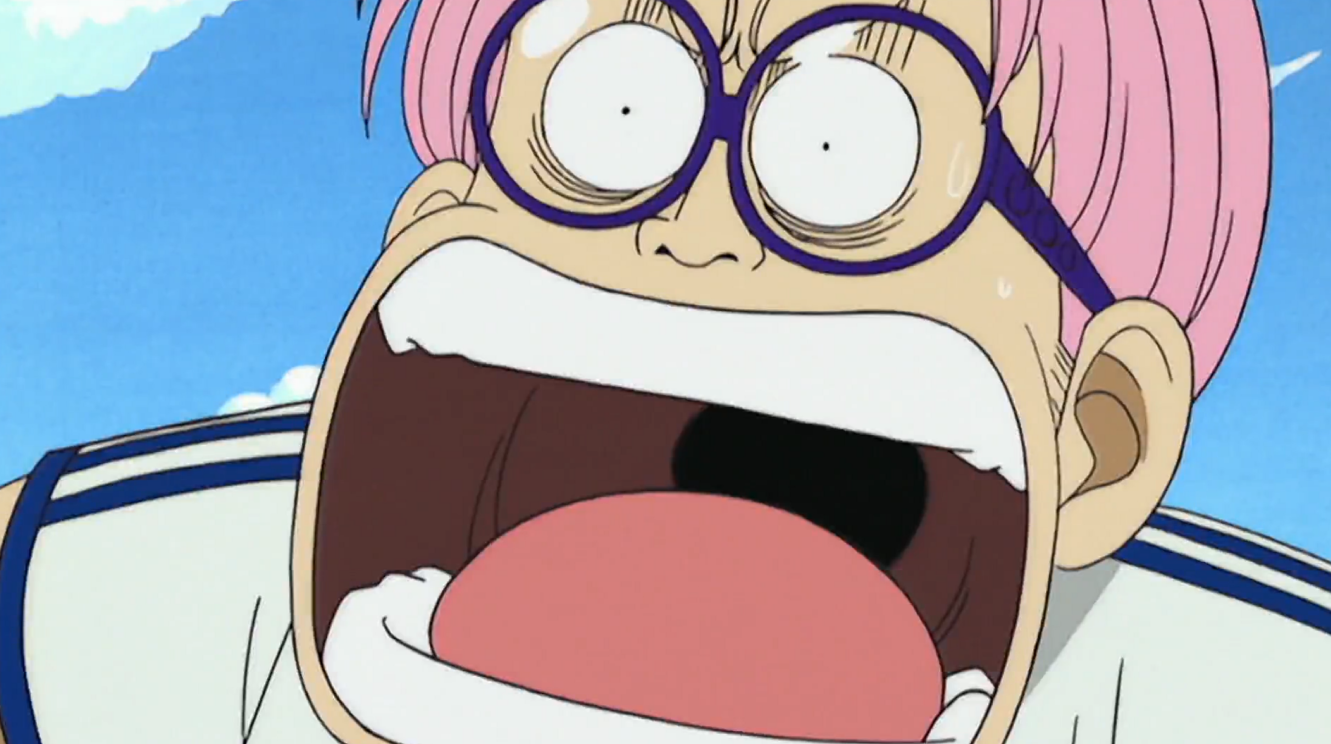 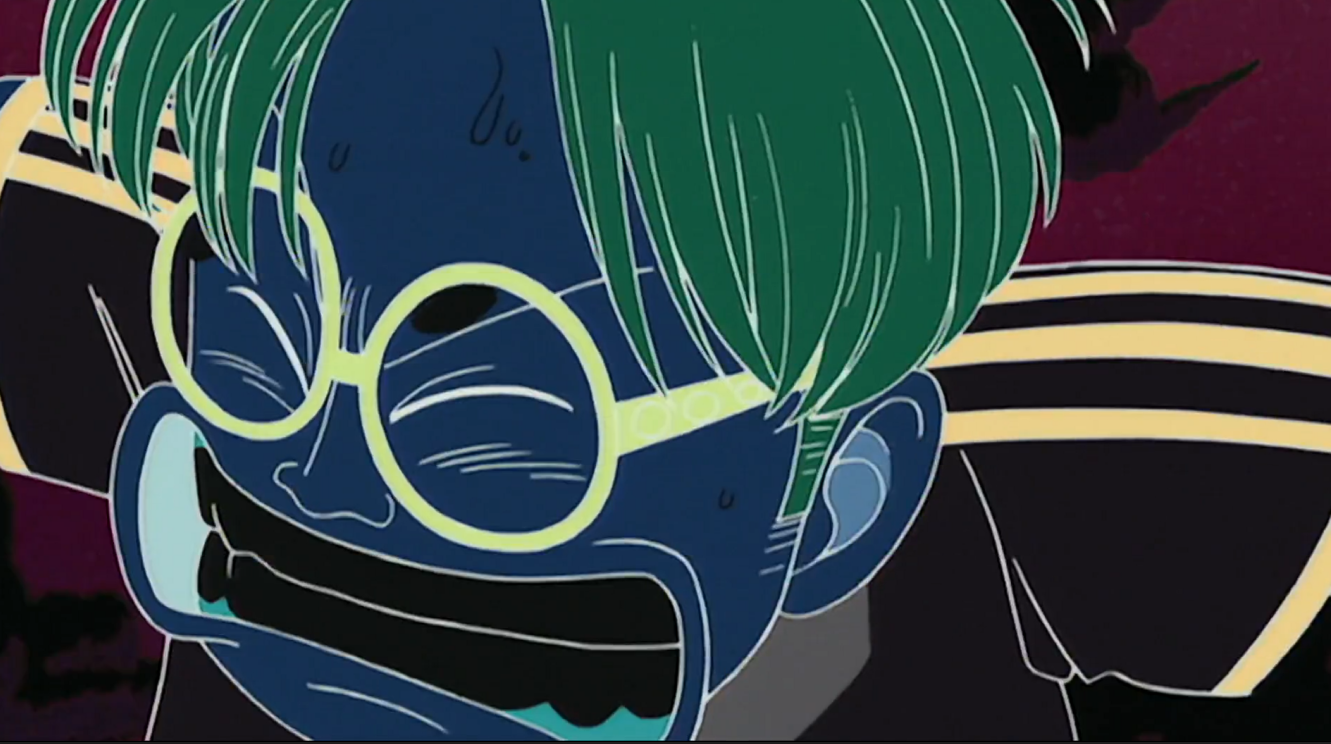 In the original, Zoro says that if Luffy ever gets in the way of his goal of being the world’s greatest swordsman that he’ll have him commit seppuku as a punishment. In the dub, he just says it will be the end of his days. To be fair, kids likely wouldn’t know what seppuku is, and explaining it might even make the matter worse if we’re aiming this show towards kids (even though it’s not meant to be.) Seppuku is a form of suicide that was used by samurai where the swordsman takes his blade and disembowels himself with it. 4Kids kept in the implication of death as punishment, so I’ll give them a pass for a change.

Originally, Morgan told his men to take their guns and shoot themselves in the head if they don’t have the guts to fight for him. In the dub, Morgan says that anyone who doesn’t have the guts to go out and fight will have to deal with him and his axe hand.

Zolo: “Your axe doesn’t scare me, but your face does.” Wow. A ‘your face’ zinger. Watch out guys, we might start getting ‘yo mama’ jokes next. By the way, in the original, Zoro just mentions that the sailors are in disarray due to being treated badly by Morgan, so he sees it as an opening.

When Luffy is spinning in the air from Morgan’s second attack, he says “you wish!” In the dub, he’s not only quiet during this shot but it actually looks like they sped up the footage of him spinning, which makes it seems nauseating.

Ah, hey, here’s one of the moments that everyone’s been waiting for! The hammer gun! In the original, Helmeppo pops back up again and puts a gun to Coby’s head to make Luffy stop beating up his father. In the dub…..they change it to a hammer gun.

It’s not even really a ‘hammer gun’ per se, it’s more of a hammer on a spring with a separate handle. I don’t really understand how that would even work on a point of physics. The spring is loaded straight down. If the trigger merely releases the spring then all that the hammer would do is jolt upwards, leaving Coby unharmed. Yes, it’s as ridiculous as you think, and this isn’t even the stupidest weapon that they edit in.

Also in the original, Helmeppo says that he’ll blow Coby’s head off. In the dub, he says he’ll smash his head flat. 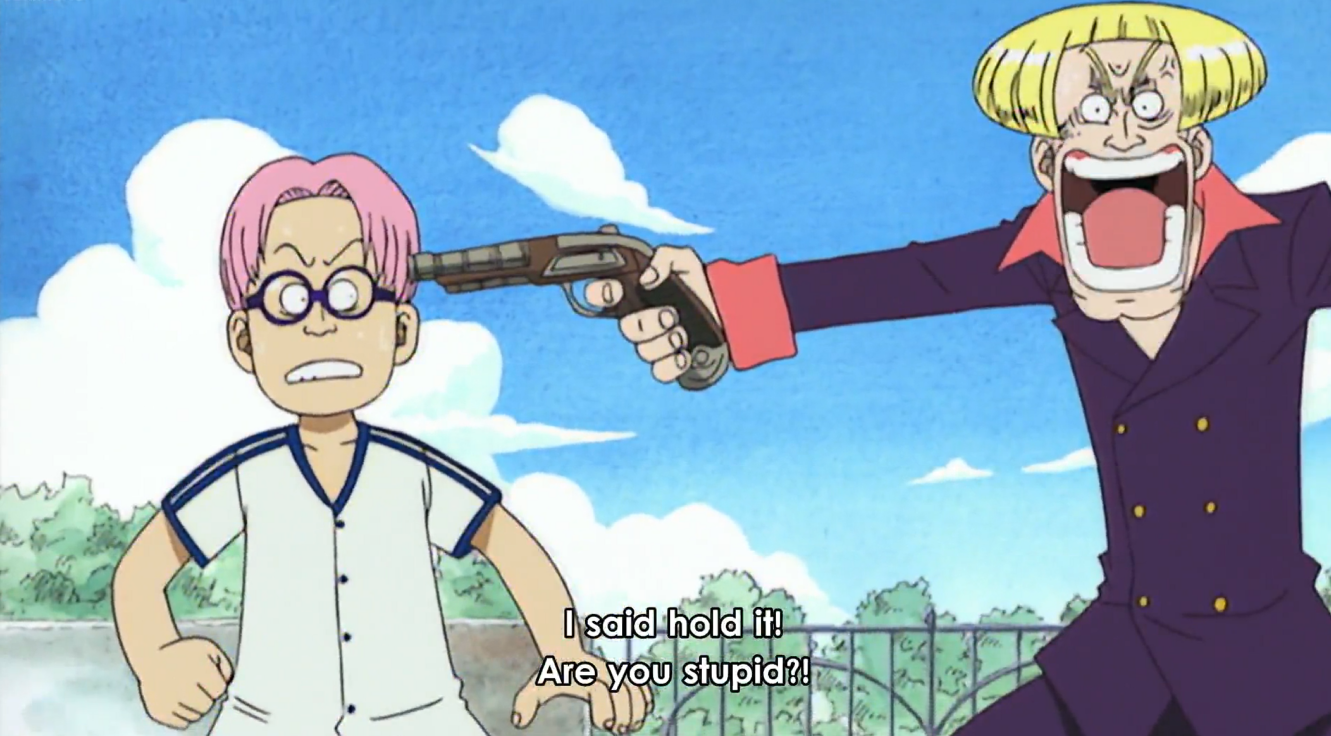 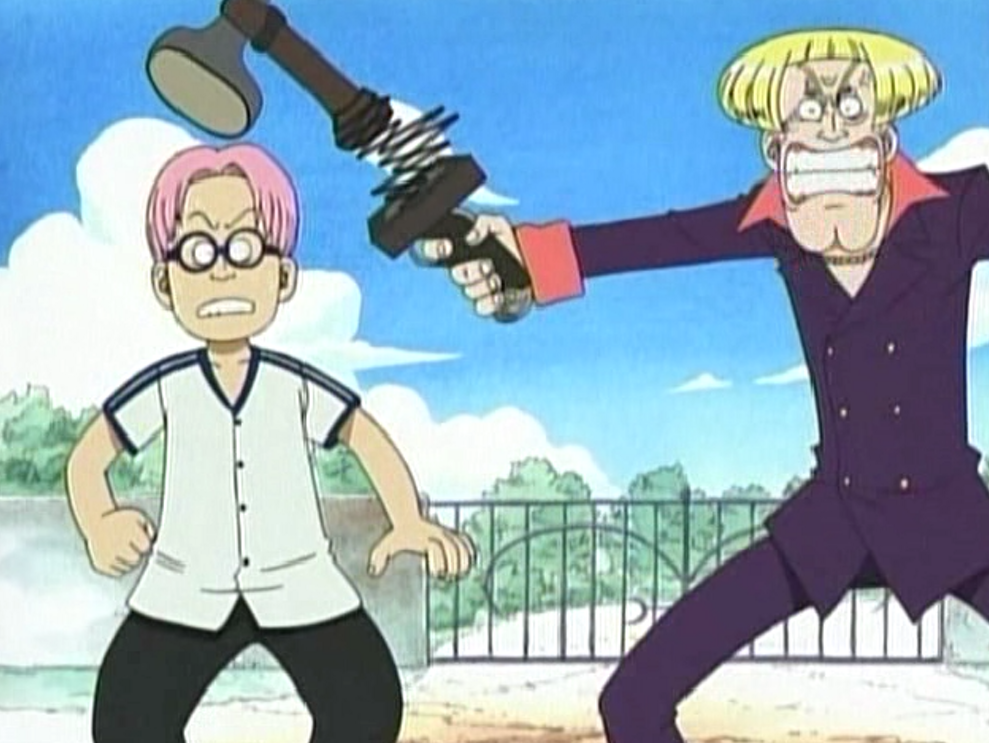 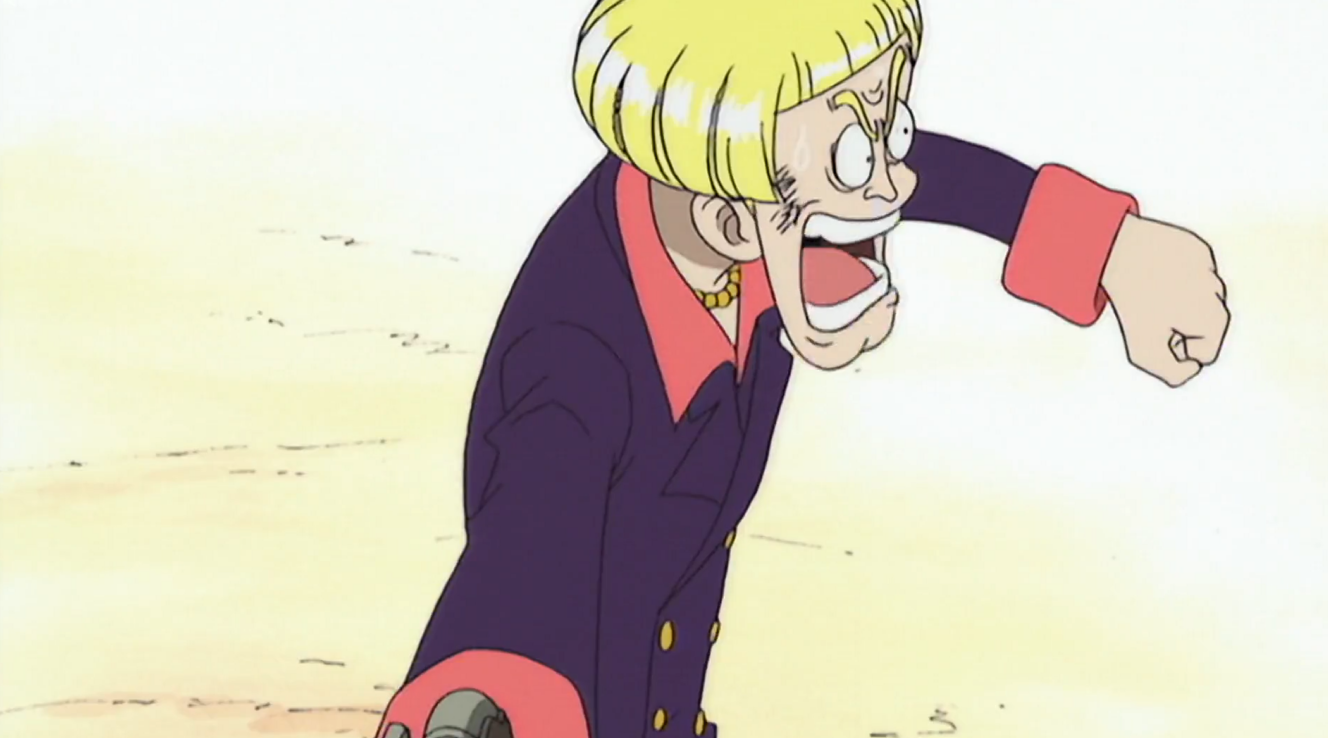 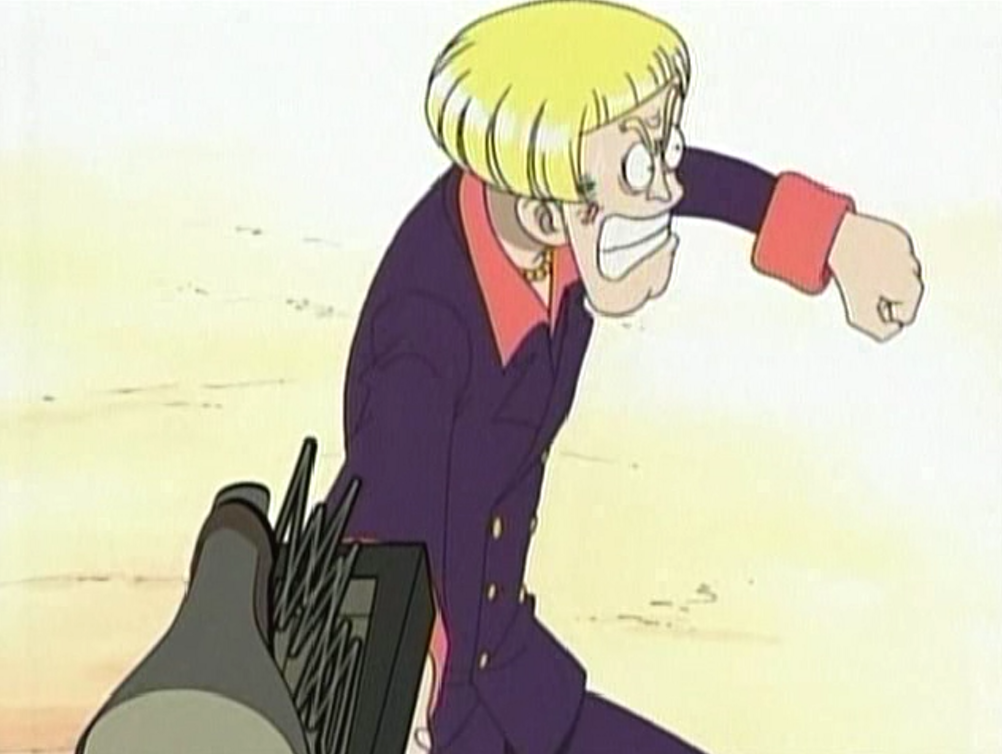 They don’t bother editing the gun correctly in the further shot even though it’d be easy as hell. They do something….I can’t even tell what they did. It looks like they added a bow saw to the end of the gun. Or like some vice thing that would crush Coby’s head? It’s certainly no hammer. I think that might be what they changed it to before they settled on a hammer gun, but I can’t tell what it actually is. 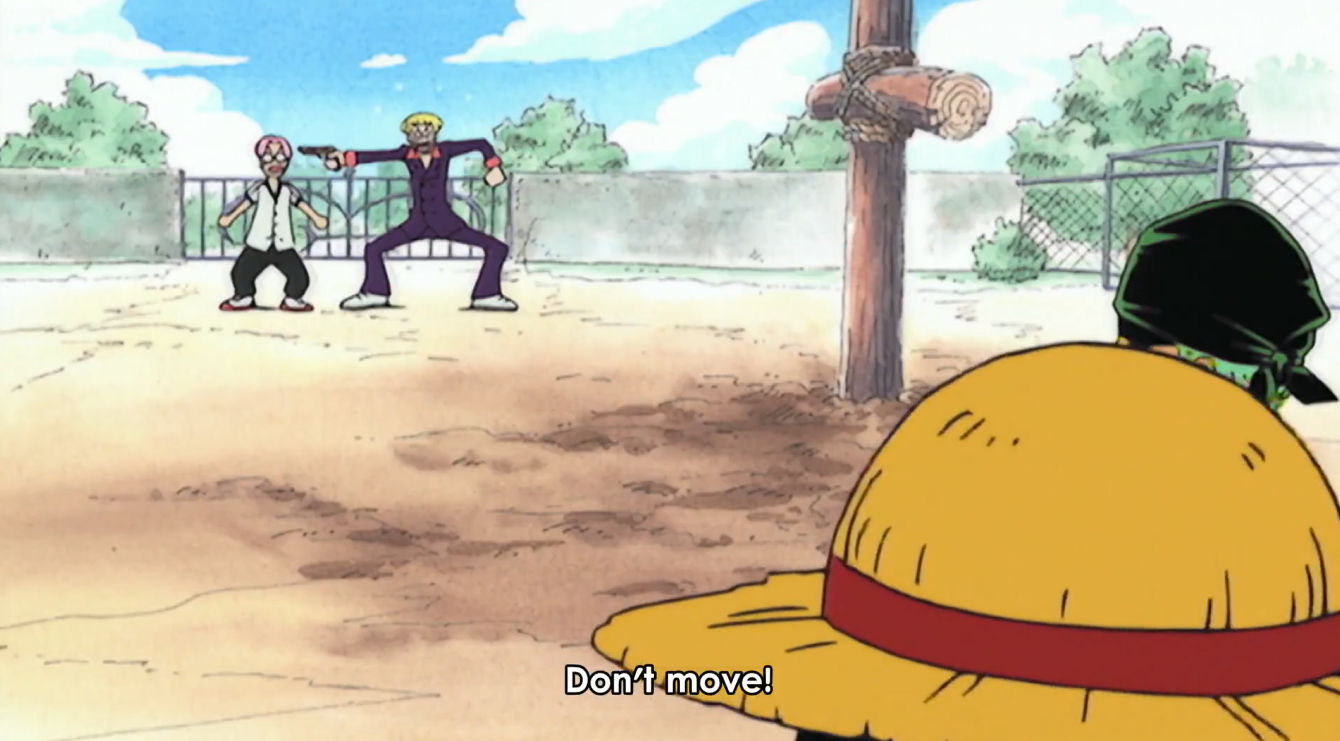 In the original, the note that Buggy leaves behind in place of the map says “I’ve flashily taken the map! Buggy” In the dub, they actually translate it by putting “I took the chart. Sorry.” They omit the ‘flashily’ part and the, what I assume is sarcastic, apology. 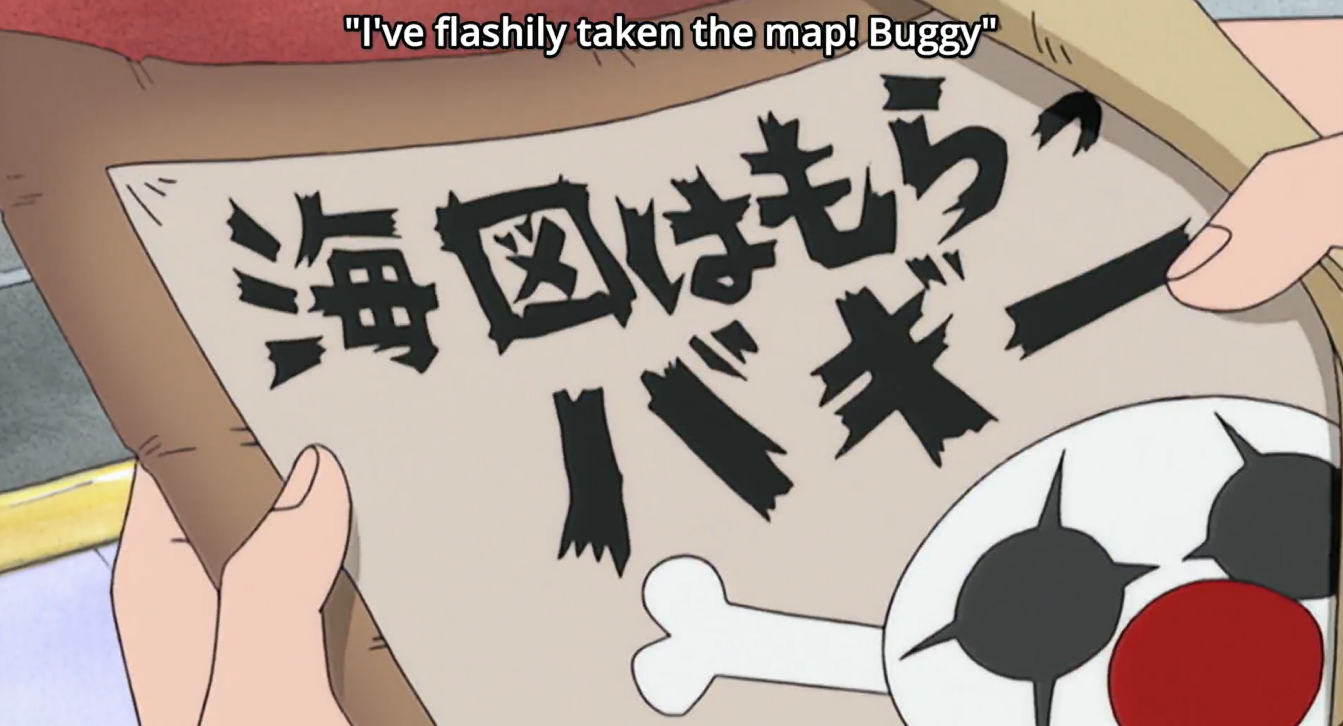 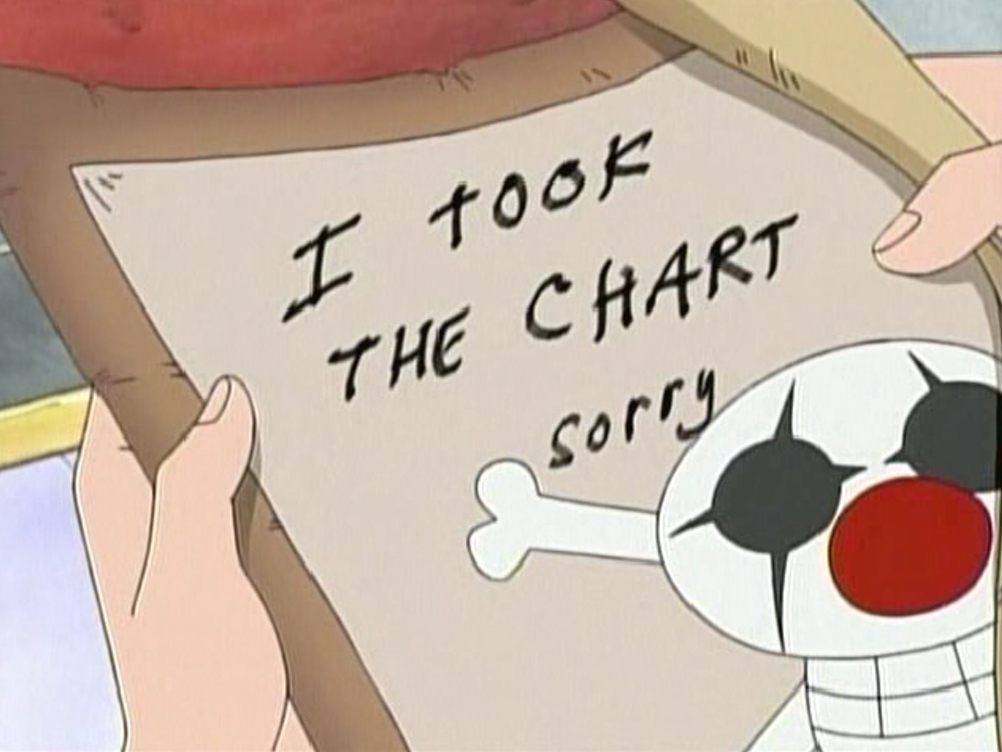 The tone in the original scene after Nami finds the note is drastically changed. In the original, she sounds very frightened by Buggy and the scene is accompanied by creepy organ music. In the dub, she sounds more like an annoyed teenager than frightened. “Oh, it’s Captain Buggy. They call him the Pirate Clown.” I’m surprised she didn’t say “ugh” and roll her eyes in that scene.

Since this is the first that we hear of Buggy, it’s supposed to make him seem frightening and be similar to an impending doom like Morgan. Here, he’s treated like a big joke. In fact, given later episodes, it really seems like the dub doesn’t want you to take Buggy seriously.

Also, the original has Nami state that Buggy’s called The Untouchable, not The Pirate Clown. That’s a big scary nickname. Don’t get in my way or I’ll make you a balloon animal and squirt seltzer in your face!

They edit out a shot of Nami looking out the window with her reflection staring back at us before the commercial. 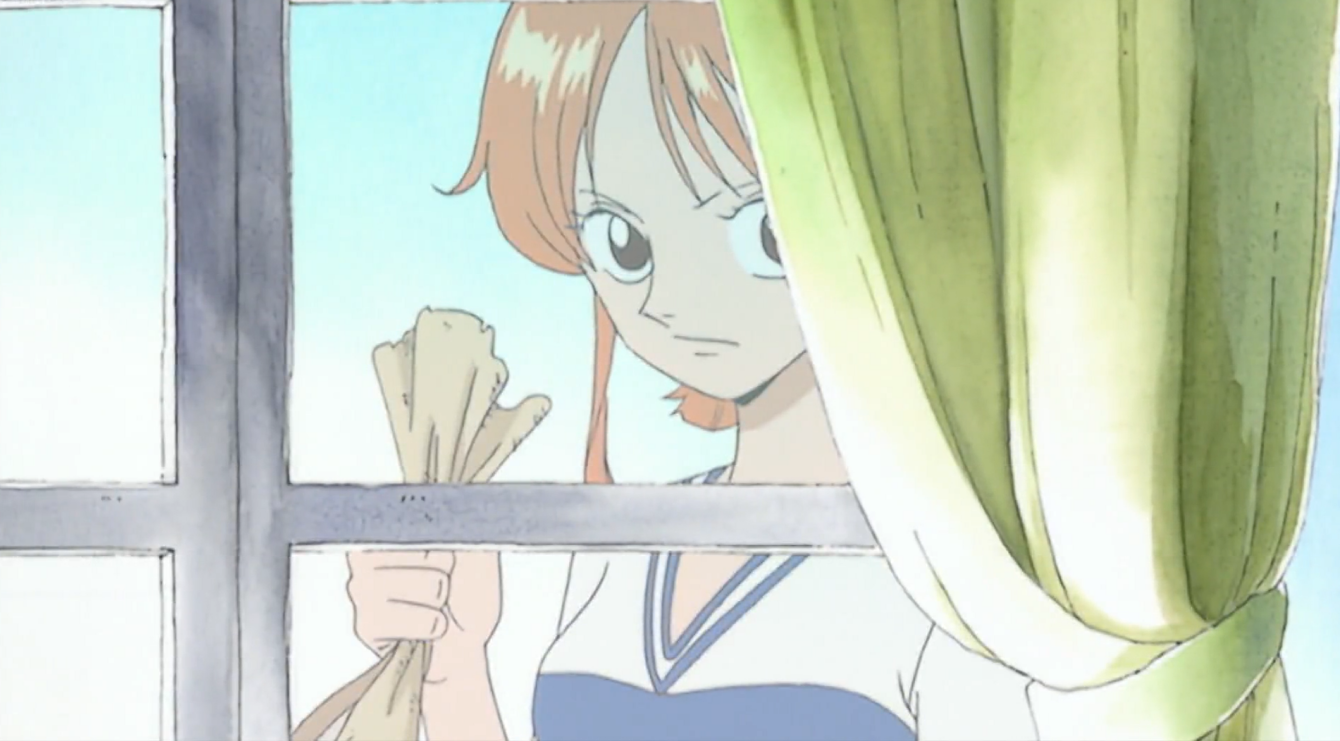 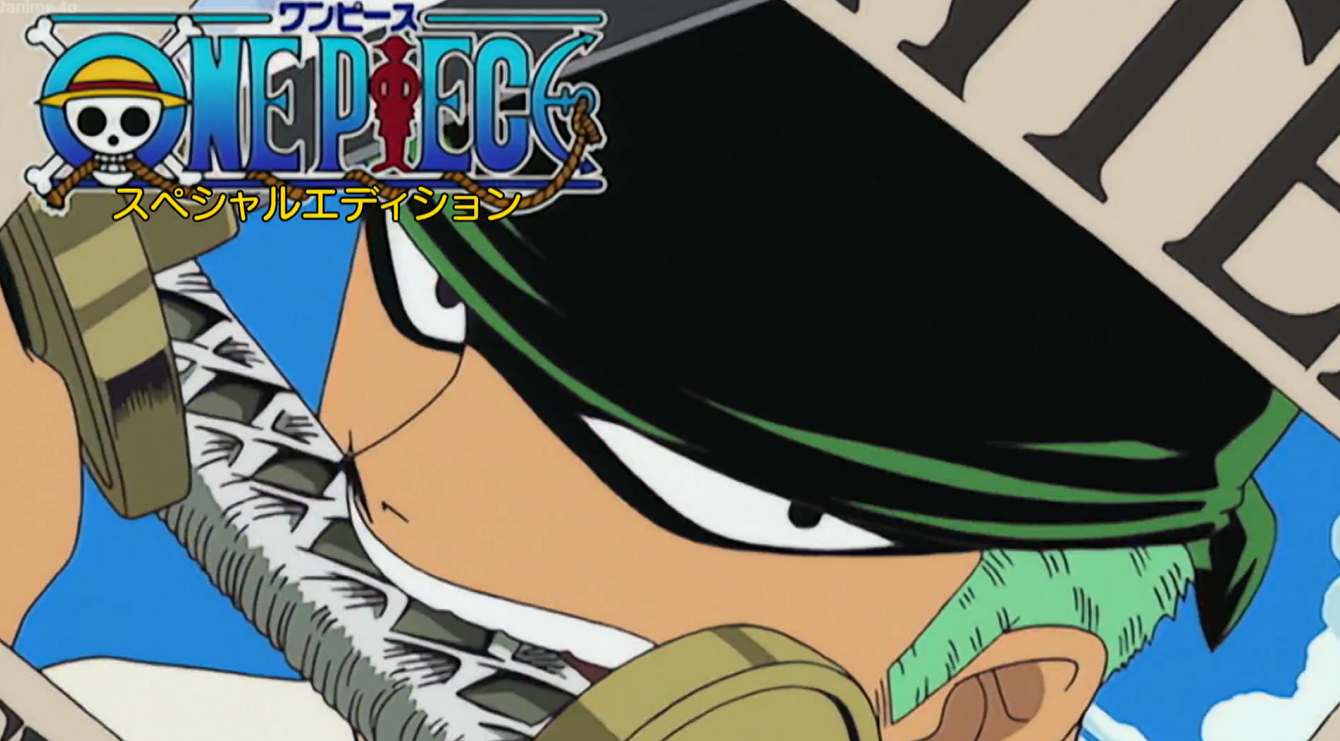 A further shot of the town is cut out before we see Zoro done with his meal.

A shot of the girl asking Coby about the Grand Line and Coby looking down before we cut to the shot of the map is edited out. 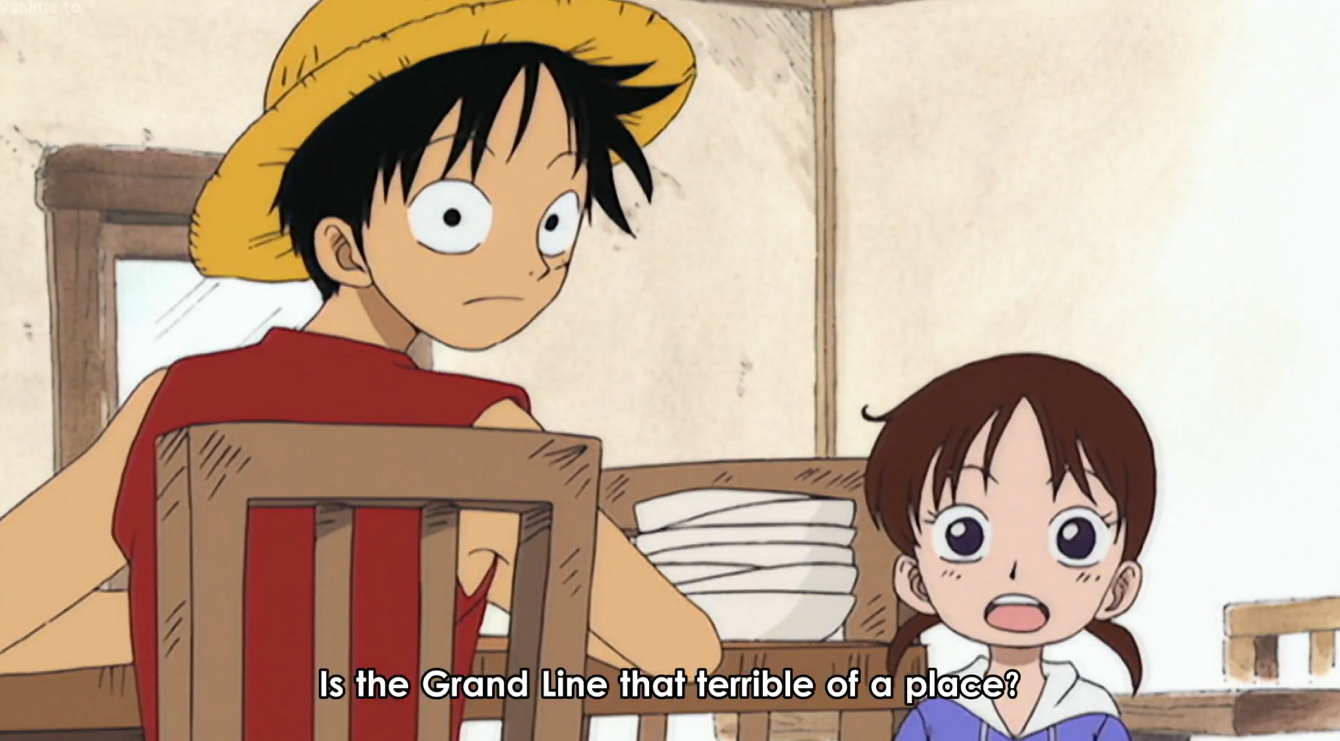 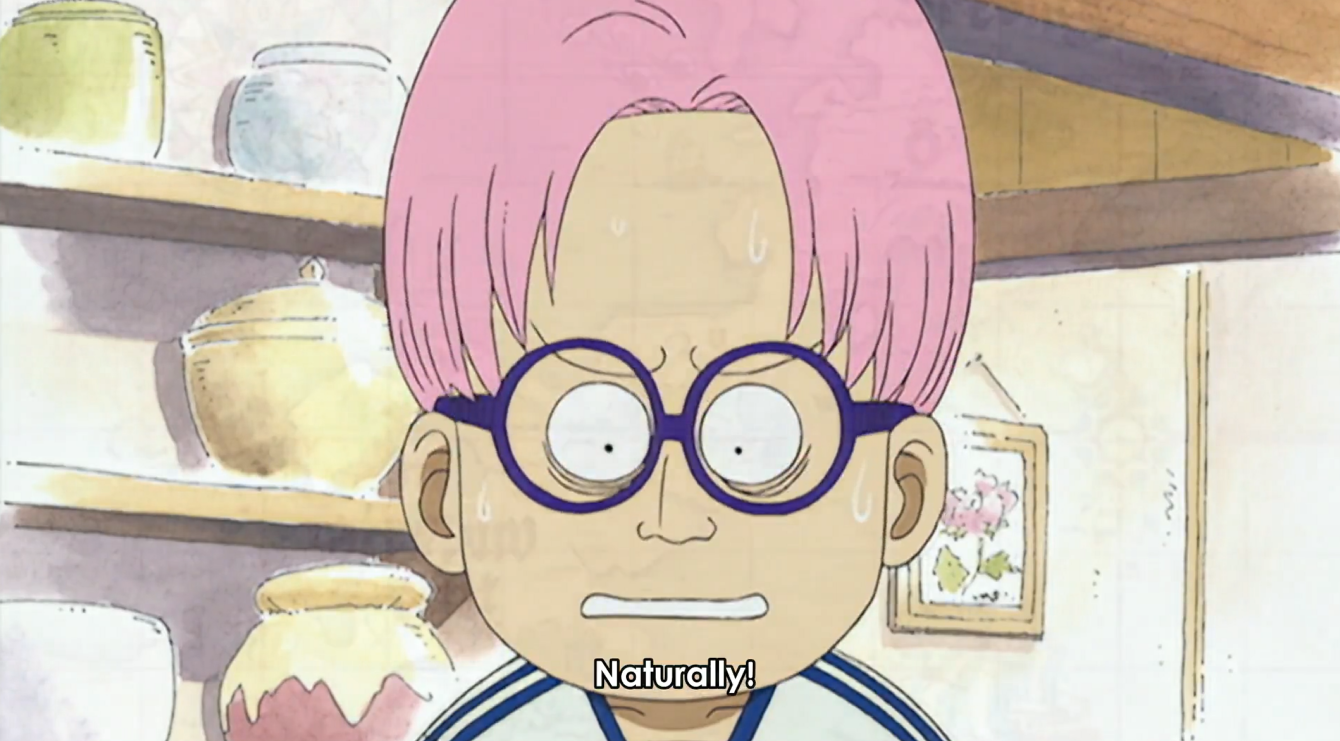 The map is changed in the dub. The dubbed version has more color to it, and the arrow that says “Red line” is painted away. 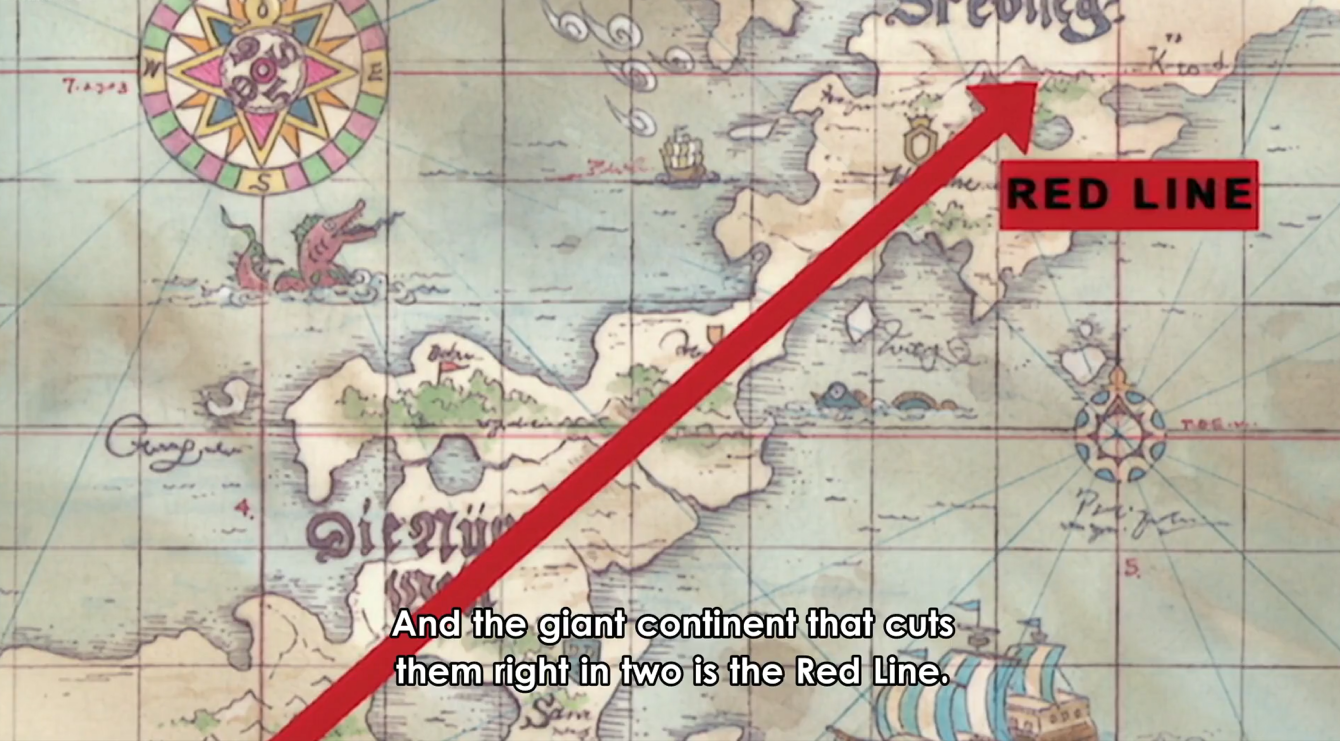 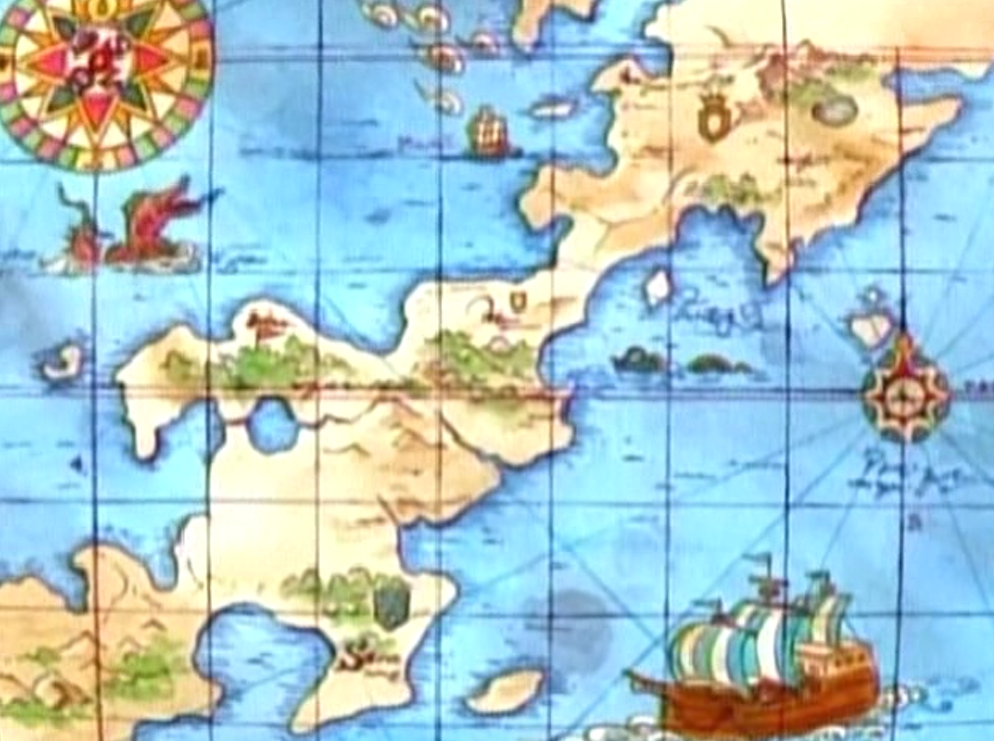 In the original, Coby spends much more time on the floor contemplating what Luffy did for him. We keep cutting back and forth between Luffy walking away and Coby on the floor as he thinks about him needing Luffy’s help to the very end and feels like he’s worthless. In the dub, he spends only about 1/10 of that time on the floor and the constant cutbacks to Luffy are cut out.

In the original, the punishment for saluting Luffy’s ship was loss of rations for three days. In the dub it’s one week…..♪ It’s been…ONE WEEK since you ate rations. Turned your head to the side and said “I’m hungry.” ♪

This episode was pretty good. It was a solid conclusion to this arc, and we finally got the almighty Zoro. I’m fine with Coby leaving the group as he wouldn’t have had anything to contribute to the crew at this point, and his dream lies with the Marines. He does come back much later in the series, so that’s awesome. Dub-wise, the hammergun eclipses all. I don’t know how people only following the dub didn’t also laugh at that.

Next episode, Luffy’s backstory! How did Luffy get his trademark straw hat and why is he so determined to be King of the Pirates?