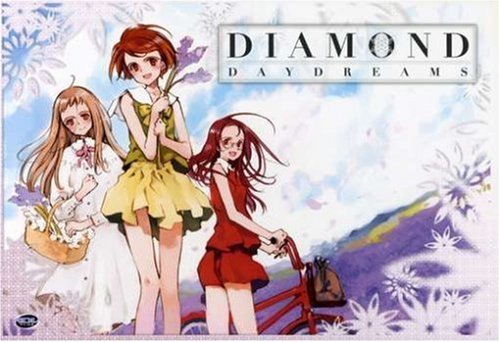 Plot: Atsuko is being run ragged trying to keep her father’s fish shop in business. Her mother is mostly deaf to her desires of wanting to live life and go have fun like all of her other friends, who are off at college or traveling, and is very strict with her. The only bits of freedom and happiness she gets on a regular basis is when she’s hanging out with an older man – a musician named Kurata.

To make matters worse, her mother has promised Atsuko’s hand in marriage to a rich man named Minoru. While he has good intentions and seems to genuinely love Atsuko, she doesn’t want to get married at all and has mixed feelings at best about Minoru as a person.

When things get dire, financially, at the shop, Minoru and Atsuko’s mother try to hurry their arranged marriage along even quicker. Atsuko can’t take the pressure anymore and runs away.

Breakdown: To be clear, this story is one of six separate romance stories that span out over the entire series, so this entry might need to be taken with a grain of salt as anthologies can always differ drastically in quality of writing, characters etc.

As for this story, it’s pretty okay, but kinda bland. I did get invested in the characters enough to feel sympathetic towards them. Despite the 20 year age difference, I find myself rooting for Kurata and Atsuko, and I pretty much hate her mother. Like Atsuko, I had mixed feelings about Minoru because he seems like a nice enough guy who wants what’s best for Atsuko, but he went over the edge into dislike when he started using his money to control Atsuko.

He offers to buy their fish shop so they can still technically own it without losing it to the bank while they try to repay their loan, but she doesn’t want him to do that. Despite her explicit wishes, he starts telling her to ‘fire’ Kurata (he was helping out since she hurt her foot) while he hires another driver because he doesn’t want her hanging around some stranger….which makes no sense because surely anyone he hires will be a stranger and she seems to have known Kurata for quite a while. He’s clearly just jealous at this point.

When she tries to tell him off, he decides to go over her head to her mother to move things along in their arranged marriage and the purchase of the shop, which seem to go hand in hand now. Her mother also flatout tells her that love in a marriage isn’t everything, basically whoring her out for a fish shop. The store is important to Atsuko too because it meant a lot to her father, but this is just skeevy and wretched.

Sell out your daughter’s future, the daughter who has proclaimed several times that she’s either not ready to get married or doesn’t want to get married at all, just to keep a fish shop open. Have I mentioned I don’t care for this woman?

The art and animation are alright. The character models are average, but they also have this weird lumpy style to them that I don’t really like, and the editing has this strange habit of including a lot of quick cuts and odd angles for no reason.

The music is also just alright. The opening is pretty catchy and the ending is nice. The background music is largely forgettable, though.

I’m invested enough in this story to see how it pans out, and I hope I get as invested if not more in the other stories. It’s not an incredible anime by any stretch, but it’s a nice mellow show for a slice of romance in your anime diet.

Recommended Audience: E for everyone.