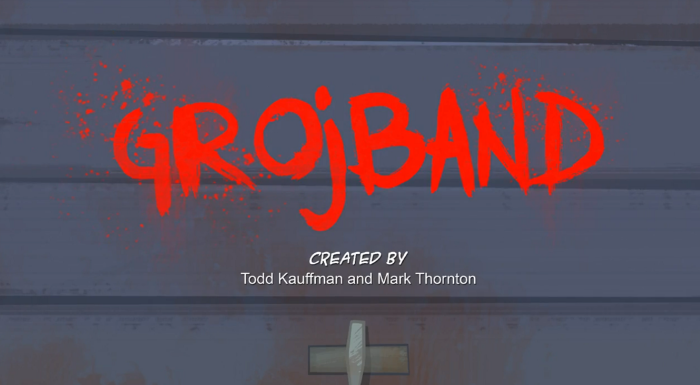 Plot: Corey and his band, Grojband, do everything in their power to be stars in the world of music.

Breakdown: This is one of those rare times when I’ll watch a show that has an 11/11 setup (Two eleven minute episodes to make up one full episode), watch one half and be so unsure of how I felt about it that I decided to watch the other half to get a better idea of my feelings. Since it is as such, let me talk about the first episode, or episode 1A before we talk about the second.

Episode 1A, Cloudy with a Chance of Malt Balls, and yes that title is very stupid and barely correlates to the story (Malt balls are at the movies, Cloudy with a Chance of Meatballs came out around this time, so we have our title) is about Corey trying to convince a movie star named Cherry Grapestain to let them be her movie trailer band, which makes about as much sense as it sounds. To do this, they decide to crash a drive-in theater premiere and play before the movie.

This episode started out with good promise in regards to jokes. There’s a joke where a couple of girls are clamoring outside of the garage after the band plays and Kon, the drummer, hopes it’s their future selves cheering for them. Maybe I looked too much into the joke, but I thought this was a clever, if not somewhat dark, joke about their future selves cheering on their life decisions. Then we get a couple of fourth-wall-breaking jokes like telling Mina, Trina’s ‘best friend’ that she’s not in this episode and saying there’s a transition when a transition comes up.

However, these jokes were well ruined as the episode went on. Kon kept bringing up the future selves thing, which made the joke stale and made me realize the initial joke wasn’t what I thought, he was just being dumb. And then the joke got weird and stupider when their future selves, somehow, someway, do show up to help them. No explanation as to why they’re here or how, they don’t even look any older, they just wear leotards and have Geordi visors on their heads.

They also kept using the ‘pointing out a transition is happening’ gag over and over.

There were still some decent jokes like Corey deciding to forego free tickets to the movie because he had a convoluted plan to get in instead, and Corey exiting the costume he was in through the torso, leaving his ‘legs’ behind to stand the costume up on its own but still having his own legs.

But then there are weird jokes that seem really stupid like Trina seemingly getting legitimately possessed when she gets super pissed and viciously writing in her diary about whatever pissed her off, causing flames in the pen and actual lightning to rain down. I’m not kidding about the lightning either – it’s real. It knocked out the projector. The fact that this thing can summon lightning is a recurring theme.

Getting a feel for the characters is a bit odd at this point. I think I like Corey because he means well and has the better jokes, but he also seems stupid and egotistical sometimes.

I don’t like Trina, but I’m obviously not supposed to. She’s the typical insanely bitchy older sister character. Think Vicky from Fairly Odd Parents if she was an older sister to Timmy not a babysitter.

I found something interesting while reading the Wiki for this show, though. Her ‘best friend’ Mina who is briefly seen here, apparently is not named Mina. Trina had her legally change her name from Bernadette to Mina so their names would rhyme….What a bitch….Mina goes along with pretty much whatever Trina says because she wants to be as popular and cool as she is. She’s basically Trina’s slave and the poor girl just takes it.

Laney’s pretty cool, and Kon and Kin, twin brothers who play drums and keyboard respectively, are alright. Kon’s character is easy to pin down as the overly excited random guy, while Kin is just kinda there.

All in all, I didn’t outright dislike this episode, minus one gross-out gag, but I felt like this was one of those shows that was trying too hard without trying….You know what I mean? They jam a lot into your face, and some of it would be pretty clever and funny in small doses, but it gives off an air of laziness because they constantly reuse gags and mistake randomness for humor. 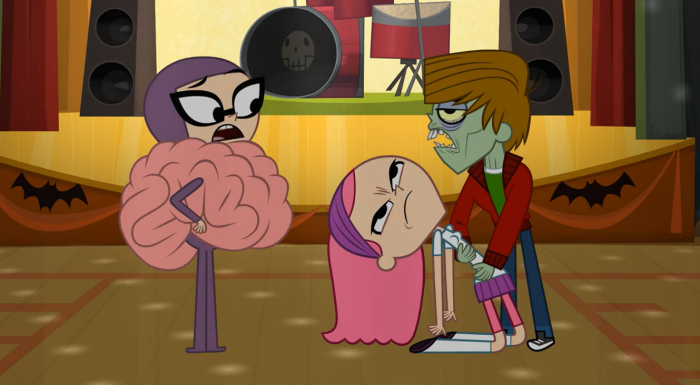 Episode 1B or Dance of the Dead is a bit of an oddity because you rarely ever hear of shows having a holiday special in their pilot episode.

The story is a bit odd and doesn’t make sense, but I’m beginning to think Grojband doesn’t care much about logic.

In this episode, the band is set to play at their school’s Halloween dance, but Trina shoves them out into the cemetery, which is, for some reason, right outside the school. Using Corey’s new amp, which somehow has magical powers, just go with it, they play in the cemetery and reanimate the dead with their song.

Doing what zombies do, they bite others and make them into zombies, lusting for brains but also following music, even when not played in the magical amp.

Corey and the band decide to….mix Trina’s diary, having been ‘powered up’ I guess by Trina’s latest hissy fit, lightning and the magical amp to play a song that will lure the zombies back into their graves, deanimate them and restore everyone to normal SOMEHOW.

This episode was definitely more solid than the first part. They didn’t reuse stupid jokes, barring one, and rely solely on a few bits of randomness to get them through. There are many more one-off jokes that work quite well.

While the story somehow manages to make even less sense than the first part, I’ve resigned myself to just taking this as a cartoon that goes with the flow and doesn’t aim to be logical. Sometimes, that’s fine. It’s a bit too noticeable, though. There’s a difference between cartoon logic and no logic.

The main pains in this one are random fart jokes here and there and the resident hottie, Nick Mallory’s dog reanimating and biting him. He’s been a pretty alright character so far – nice, suave, though also being full of himself and speaking in third person – so having him visit his dog’s grave, for real, only to have him come back to life as a zombie and bite him was a bit sad.

The one recurring joke was claiming Laney, the token girl of the group and token love interest for the main character, was wearing a costume when she clearly wasn’t. It wasn’t funny the first time, it wasn’t funny the next three times. I did like the gag where we see her heart beating really fast when Corey touches her lips and then exits out her mouth and leaves the room when he insults her.

The art and animation are, might as well coin this, typical TeleToons. I hate to say that because TeleToons is a network, not an animation studio, but it seems like every TeleToons show is the same style. Slide-y flash animation with big head/skinny bodies (weird shapes for the overweight people) I don’t dislike it, but it’s nothing special.

The voice acting is actually quite good. And the music, which needs to be impressive in a show about a band, is, shockingly, very good. You’d be surprised how hard it is to find decent music in shows about music…I found myself replaying the songs in the episode a few times. They’re not heading for the pop charts, but they’re very solid songs.

Last note, but I thought I’d mention that one of the creators behind this show, Todd Kaufman, also created Looped. I found this out before I watched the episode, so my expectations were quite low. However, this series also has the star power of the producers behind the Total Drama franchise (Kaufman and co-creator Mark Thornton also directed numerous episodes of Total Drama) so I became as mixed as I was when I watched the full episode.

I’m just not firm enough in my opinion of this show to give it a ‘yes’ in all good conscience. This is heavily leaning ‘yes’, though it was leaning ‘no’ for the first half. It has promise, but it needs to make a bit more sense, get rid of the fart jokes and focus more on quick jokes that work instead of hammering the same joke into us over and over.

It’d also be a good idea to tone down Trina, throw poor Mina a damn bone and stop whatever that stupid diary thing is because I cannot make heads or tails of it and it takes up way too much time to be justified.