Skip to content
HomeDissecting the Disquels: Lilo and Stitch 2 – Stitch has a Glitch 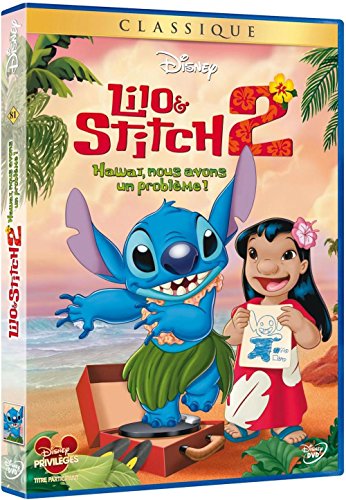 Plot: Stitch starts experiencing odd bouts of uncontrollable destruction. While everyone, even Lilo, starts believing Stitch is reverting back to his old ways, Jumba and Pleakley know the truth. Stitch’s molecules were never fully charged when he was created, and now he’s experiencing massive glitches in his programming that are causing these destructive episodes. They scramble to find a way to recharge him before he loses so much energy that he dies.

Meanwhile, Lilo and Stitch are preparing for a hula competition. Her mother won the competition years ago and she wants to win to make her proud. However, Stitch’s malfunctioning behavior continues to get in the way.

Breakdown: I’ve never had such massive mixed feelings for a Disquel before.

The main plot is solid. Have Stitch revert back to his destructive behavior, but make it more of a Jekyl and Hyde situation based on him glitching instead of having him turn bad for no reason. There’s a lot that could’ve been done with that, but they dropped the ball pretty bad.

We have three plots running through the movie – Lilo and Stitch’s hula plot, Nani and David are having relationship issues again and Pleakley’s being an annoying dumbass trying to ‘help’ him, and Jumba is trying to make a new fusion chamber to recharge Stitch before it’s too late.

Let’s start with Nani and David’s plot because that’s the shortest and most pointless. First of all, are these two ever happy together? I don’t remember a lot of their interactions from the TV series, and I love David a lot, he’s a great boyfriend and father/big brother figure to Lilo, but he and Nani, as a couple, seem very rocky. I feel like every time the focus is on them in this franchise, they’re having relationship issues.

This time, as Pleakley puts it, their relationship is just fizzling. Nani doesn’t seem to be paying much attention for him or making time for him. David keeps making the effort and Nani either doesn’t acknowledge it or can’t attend to it.

I know that Nani is very busy being a young single guardian to a small child, especially in the house filled with aliens they now inhabit, but she can usually make time for Lilo and does have downtime, yet never seems to be willing to give similar attention to David. Even when they’re just having a relaxing family fun night at home, he gets shafted.

The plot is mostly just David, for some reason, listening to Pleakley’s horrible dating advice, then Pleakley himself ruins it more and Nani gets mad for some reason. The plot is resolved by David helping Nani up a mountain. Not kidding. One minute she’s giving him the silent treatment at Lilo’s hula competition, then they’re making eyes at each other when he helps her up the mountain. Truly a romance for the ages.

The hula plot, which takes up more of the runtime than the glitch plot, oddly, involves Lilo and Stitch trying to come up with a hula for an upcoming competition. Her mother won the competition one year and she wants to win in order to make her mother proud of her.

A lot of this plot is montages of them coming up with ideas, creating the hula and practicing for the hula. Some parts were entertaining and a little funny, but it really felt stretched out when we got to our third montage in this hour long movie. Not to mention that I think they’re hitting the Elvis button a bit hard in his movie. I know she loves Elvis and it does make for a good soundtrack, but I’ve seen Elvis movies with less Elvis.

There are also numerous emotional moments in this plotline because Stitch keeps destroying her plans when he has freakouts and Myrtle and her goons keep making her feel like she’s not good enough. I also really liked the ancient story they based the hula on.

I feel like Lilo was a bit out of character with Stitch, though. I know she’s emotional right now, but she never once, until the end, even questioned if something was wrong with Stitch. Instead, she just believed him to be flatout bad, told him so and said he would always be as such. Ouch.

Speaking of the moment of realization, even though the freakout that prompted that revelation was the same as all the others, she questioned if something was wrong with him this time for some reason. He cuts her cheek, even drawing blood, and the very next shot, not but five seconds later, the cut and blood are gone. Either Disney didn’t commit to this ‘shocking’ moment, the animators got lazy or they forgot.

Either way, that was an opportunity for something emotional and impacting, like Nani freaking out that Stitch actually hurt Lilo or Stitch having a horrified look on his face after he injured her and reprised the shame later after she found him on the cliffside. But, no, just Disney magic’d it off her face.

This was meant to mirror a part of Stitch’s nightmare where he does the same thing, but, again, the impact is lost if you magic it off her face.

The ending of this plot was alright and pretty sweet. At least they didn’t go the cliché route of having her return to the competition and win, and it’s implied that Mertle definitely didn’t win because her hula was crap. I realize now that Mertle’s pretty much the only surviving embodiment of the annoying jerkass mainland tourist characters, besides the silent fat beachgoers, that they had in the original cut.

There are numerous deleted scenes from the first Lilo and Stitch movie where Lilo encounters obnoxious mainland tourists, some of which being borderline racist, but they were more or less all cut before the actual animation started. Mertle does live in Hawaii, but she’s the only white character in the entire series, and the hula implies that her father brought her family from the mainland to Hawaii to sell cheap ‘authentic’ Hawaiian merchandise.

I might be reading too much into that, but it’s interesting to consider.

Now to the actual plot of the movie, the glitch. This is the part with which I have the most problems.

First off, while it’s a solid plot, it’s ultimately wasted potential. All Stitch does is mess up a few things and give Lilo an insta-healing scratch. I didn’t want him to do too much damage or hurt people, but they had the foundation of a really decent plot here, one that could’ve been much more emotionally impacting and interesting for Stitch, but they decided to just have him be a slight nuisance.

Secondly, half of this movie would never have happened had Jumba and Pleakley just told Lilo, Stitch and Nani what was going on. I never understood why they were keeping this a secret or why they were letting this malfunctioning destruction machine stay running loose with a small girl.

If they had just told them what was happening, they wouldn’t have treated Stitch like a monster, Stitch and Lilo would’ve never fought, Stitch would realize he’s not inherently bad and wouldn’t feel like garbage and maybe they could’ve helped save him. They also could’ve kept him contained to prevent him from causing damage and hurting people. But nope, it’s a secret for no reason.

Lastly, the resolution to this plot is so predictable it’s depressing. I predicted it by just reading the little blurb for the synopsis. Stitch causes problems, everyone gets mad at him, his glitches get too bad, death fakeout, Lilo’s love awakens him, all is well.

To make it even worse, they foreshadow the ending with Lilo’s hula story. It also has two friends being torn asunder by outside forces, resulting in one of their deaths, and love brings the other back to life.

To anyone who cares to disagree, let me remind you that Lilo is an orphan. She is probably one of the worst characters to be partaking in this trope. I just keep imagining:

Doctor: “I’m sorry, Nani and Lilo. We did everything we could to revive your parents, but I guess you just didn’t love them enough.”

I was actually going to give this moment a pass because Stitch did spend some time in the fusion chamber before he was revived in Lilo’s arms. Maybe he got enough power and then Lilo woke him up. But then we get this exchange.

Pleakley: “But…how is it possible?”

So, the fusion chamber seemingly had nothing to do with it. Also, not only did Lilo’s love for Stitch bring him back to life, it also fully recharged his molecules.

Despite all of that, I can’t say I hated or even massively disliked this movie. It has plenty of funny moments and some pretty heartwarming ones too – the aforementioned death fakeout nearly had me getting misty-eyed, especially with the song they put in there – it’s just sloppily written and disappointing.

The art and animation are better than Stitch! The Movie. It’s somewhere between TV quality and the original movie’s quality, siding more with the movie quality.

The music is also definitely better than Stitch! The Movie with many more tracks, some new, some old, and a new vocal song made just for the movie, “Always.” which was very nice and relaxing.

The voice acting was well-done. Most of the cast reprises their roles from the original movie, except Daveigh Chase is replaced by Dakota Fanning. She does a remarkable job, though. I couldn’t even tell the difference.

All in all, the technical quality is great, but the story falls flatter than pancakes. It’s predictable out the gate, only gets more predictable with foreshadowing and most of the problems would’ve been fixed had Jumba and Pleakley just told them about what was going on. It’s not unsalvagable because it does have its moments, but it’s still a mess. It’s definitely on the higher end for a Disquel, but firmly middle of the road for a movie as a whole.

Recommended Audience: There’s kinda blood, a little, but the wound magically vanishes. Death is mentioned and there’s a reversed death. 5+

10 thoughts on “Dissecting the Disquels: Lilo and Stitch 2 – Stitch has a Glitch”