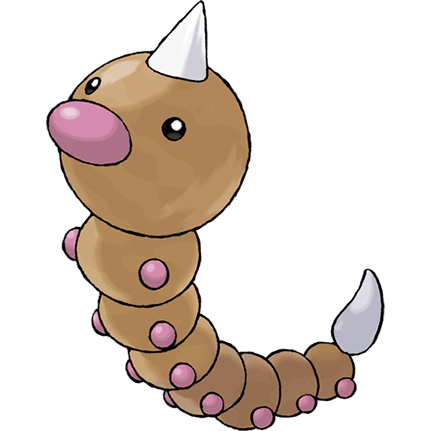 Name: Weedle’s name is either a mixture of ‘worm’ and ‘needle,’ pointing to the spike on its head, or a different way of saying ‘weevil.’ I like Weedle’s name. It’s pretty cute and fitting. Plus, it’s fun to say.

In the original Japanese, it’s called Beedle, which is a mixture of ‘bee’ and ‘needle,’ which may seem more fitting, given its evolution, but I can’t help but think it’s saying ‘beetle’ which doesn’t fit at all.

Design: Weedle’s design is pretty cute. Not nearly as cute as Caterpie, but I think that’s kinda the point. (Hahah, the point! Get it!?) I was never a fan of this shade of brown/dark orange it’s got going on, and its mouth kinda weirds me out.

As a side-note, though, look at this early design work.

…..It looks like a clown with no arms or legs.

In terms of sprites, Weedle’s stays pretty unchanged and fairly boring throughout each Gen. The only exception is B/W/BW2 where Weedle gains a very weird and creepy animation.

Weedle, like Caterpie, also went the gold route for their shiny, but they messed it up a little. Weedle’s shiny has a more subtle golden color most of the time to the point where it looks dull. Other times, it looks very yellow to the point of being an eyesore.

Cry/Voice: I like Weedle’s game cry, but I don’t find it very fitting for a little worm. It sounds more like a cry for a vicious small animal or something.

In the anime, Weedle’s voice is very weird, and I attribute this to the fact that they chose to have Weedle say its name instead of making a noise, like Caterpie. I don’t think this option works well for Pokemon who don’t have visible mouths. It makes it sound too obvious that this is a human saying a word instead of an animal making a noise. The actual voice is fine. It has a nasally ‘bug-ish’ voice, but the fact that it says ‘Weedle’ instead of just making a noise hurts it.

Dex Entries and Backstory: Similarly to Caterpie, it’s to be expected that Weedle’s backstory and Dex entries are a little dull…and they are.

Weedle’s most notable feature is, of course, its poisonous barb. Its bright colors are meant to fend off predators, even though, honestly, Caterpie is brighter colored than Weedle. It eats its weight in leaves every day, and it uses its powerful nose to sniff out the best tasting leaves. Also, yes, apparently that big red ball on its face is mean to be a big ‘ol nose. Thanks for giving my clown joke more validity.

In terms of design, Weedle is based off of a wasp or hornet larva.

Fun Fact: Weedle’s name was used in the naming of a real life insect – The stentorceps weedlei, a species of wasp. It was named as such because it, like Weedle, has a needle-like protrusion coming out of its head. 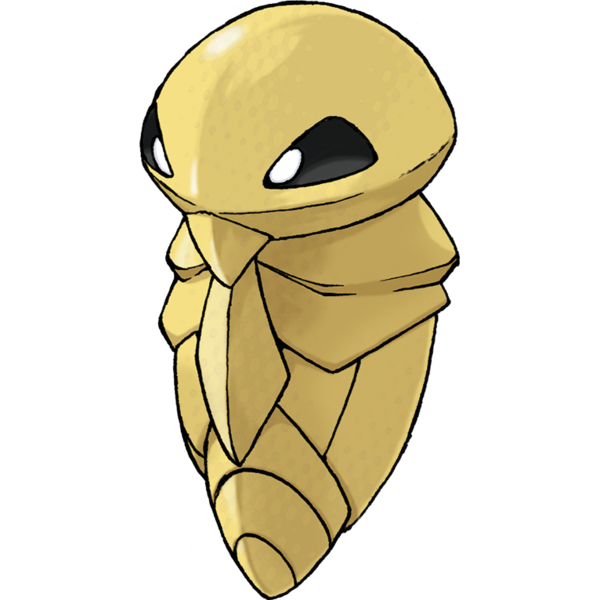 Name: Kakuna’s name is just a changeup of ‘cocoon.’ I really like Kakuna because, even though it’s only changed through spelling and one letter, it sounds really cool. It’s very snappy and fun to say.

It’s Japanese name is literally just ‘Cocoon’ which is somehow even lazier.

Fun Fact: In France it’s called Conconfort….which sounds like a furniture brand they tied into Pokemon.

Design: I really like Kakuna’s design. You’d think that having two cocoon Pokemon in the same gen would lead to redundant designs, but they do a fantastic job differentiating Metapod and Kakuna. First and foremost, though it’s damn near impossible, Kakuna seems to have more of a dynamic pose than Metapod. It’s upright and seemingly curved towards you, like it’s being offensive.

Kakuna also has a very clear expression – and it’s pissed. Fitting of a Pokemon about to become a pissy bee. The overall patterns and shape are also more interesting than Metapod’s design, and the color is striking.

In terms of sprites, Kakuna had a weird feature in the first gen. It seemingly had barb-like arms, which are weird for a cocoon to have, and I’m glad they got rid of it in future installments.

Otherwise, Kakuna’s sprites through the gens have stayed relatively the same. The only real note I have for them are that I love how Emerald’s sprite glows.

I really like Kakuna’s shiny. It has a cool bright green color to it that makes it almost seem like it’s glowing.

Cry/Voice: Kakuna’s cry is actually pretty cute. It’s like its purring. I don’t really think it fits the Pokemon, but I like the sound.

As far as I can tell, Kakuna barely makes any sound in the anime.

Dex Entries and Backstory: Kakuna’s Dex entries are exactly what you’d expect them to be – It’s….a cocoon….

Outside of having a poison barb that it can extend when threatened, that’s pretty much it.

Its backstory is equally uninteresting because, as you’d expect, it’s based on the pupa of a honeybee. 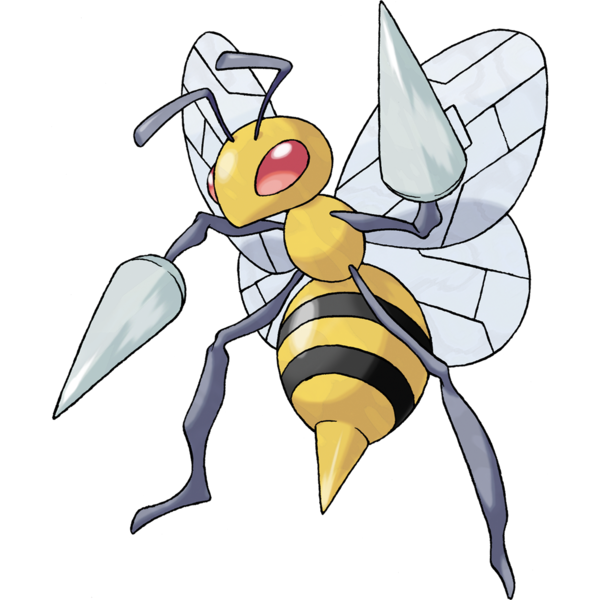 Name: Beedrill’s name is a combination of ‘bee’ and ‘drill.’ I’ve always really liked Beedrill’s name. It’s not the most mind-blowingly creative thing in the world, but it’s snappy, intimidating and cool.

In Japanese, its name is Spear, which I think is a bit too on-the-nose, but fitting. I think, given the style of Beedrill’s drills, it’d be more fitting to call it ‘Joust’ or something. It’s also noted that, in reverse, the katakana of Spear スピアー is アピス or Apis, which is the genus for the honey bee, which is kinda cool.

Designer 1: “Hey guys, how do we make bees even more frightening?”

D1: “That’s straight out of a nightmare. Good job everyone!”

I love Beedrill’s design. Even though I don’t like bees, they somehow made a bee Pokemon look awesome. It has a sleek look, is very intimidating and has friggin’ drill arms. What more could you ask for?

Sprite-wise, nothing of real note until Crystal where it gets a pretty cute animation where it twitches its head back and forth and flaps its wings.

Ruby and Sapphire are fine, but then Emerald becomes terrifying with that vibrating and separating animation.

Still just good, but nothing notable, beyond that. The back sprites for Gen IV are pretty dynamic and cool, though.

Gen V gets a constant animation, and that’s awesome. 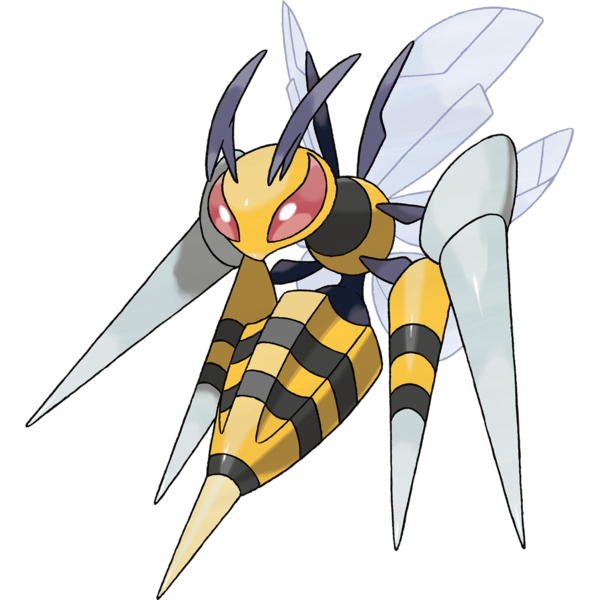 What more could I ask for? How about this sleek, stylish son of a bitch?

Damn, Mega Beedrill is incredible. Look at that thing. It’s like someone mixed a Beedrill with another Beedrill and then fused that with a fighter jet. It’s awesome. Even small details like the indents on the stinger and the visor-esque shaping to the eyes are fantastic.

I adore Shiny Beedrill. The shades of green and blue work with each other very well. It looks somewhat alien, to be honest, which is cool.

Cry/Voice: Its game cry is low-pitched and intimidating without seeming unfitting for a bee. It’s a bit buzzy so it fits rather well.

Its anime voice is disappointing. While it’s to be expected that an insect gets a high-pitched voice, Beedrill kinda loses its intimidation factor when you hear ‘Beeeedrill.’ It should just be a low pitched-hum or something.

Dex Entries and Backstory: Nothing really surprising in the Dex entries. It flies super fast, is very territorial, tend to fly in swarms and has three extremely large and venomous barbs.

As for its design origins, it’s, of course, based on a bee. However, the Wiki states that the design was most likely inspired by the Asian giant hornet. I was going to comment that the one negative about the shiny is that it’s not very fitting to a bee, but, surprisingly, the shiny version does seem to be based on a real bee – The agapostemon. It has a very unique bright, metallic green look to it. Go figure.

Next up, the Pidgey line!