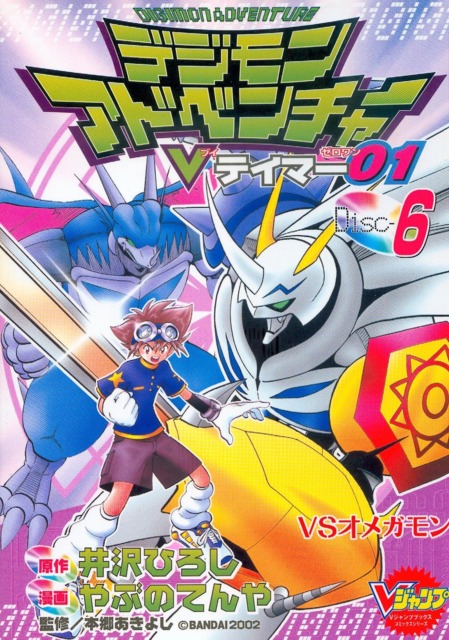 Plot: Taichi and Zero battle furiously against Hideto and Omegamon, but quickly start struggling under his immense power. They manage to eek out a victory in the end with the help of Warg and Melga themselves, tired of Hideto treating them in a fashion that is increasingly similar to Neo’s style of taming. Hideo realizes the error of his ways and vows to take down Neo himself while Zero recovers. With the help of Mari and Sigma, Hideto starts the battle against Neo and Arkadimon, but they may have bitten off more than they can chew.

Breakdown: The action is amping up even more in volume six as we get closer and closer to taking on Neo and Arkadimon, who is now Ultimate level.

It’s hard to believe Zero would have a chance against Omegamon, mostly because it’s a friggin’ Omegamon, but Zero and Taichi show yet again that a Tamer’s bond with their Digimon is vital to victory. Their strength in their bond helped them achieve a new level in power, and Hideto’s increasingly weak bond with his Digimon leads them to turn face against him as they wish to truly stand on the side of good.

Hideto is consumed with a burning desire to achieve his and, supposedly, Neo’s idea of a perfect world for Rei to live and walk in, but it takes Taichi and Zero nearly falling at his feet and his Digimon turning on him in shame, almost killing themselves in the process, to come to grips with the true situation. What they’re doing is wrong, and Rei wouldn’t want any bit of her happiness or mobility to come at the price of the suffering of others – human and Digimon alike.

When you hear that Hideto is heading off to face Neo himself, with Sigma and Mari providing backup, you basically know that they’re all walking off to their doom. It was obvious from the start that Neo never gave a crap about these three, and after what he did to Piemon, it’s obvious what he plans to do with Omegamon and Rosemon. Since we know the final confrontation has to be Taichi and Zero vs. Neo and Arkadimon, the reader goes into this battle with a sense of dread.

Still, it’s the effort that counts, and this entire conflict is vital to the character development of all of the former Aliases. It’s also further development, for the better or worse, for Neo. He is quickly devolving even further into a psychopath who is drunk on power and cares nothing of others, even Rei. It’s clear now that his main mission has been long since forgotten and he only wishes to take over the Digital and real worlds with Arkadimon and nothing is going to stop him. It really makes you wonder if there’s any redemption for him, because, as far as we’ve seen, he’s always been a dick, even before Rei’s accident.

In the end, this volume did a great job in both making both battles massive and important to the characters involved. It prepares us for the final confrontation and creates a deep sense of dread at the same time while not robbing us of hope.

Recommended Audience: This volume gets pretty brutal, but nothing terribly graphic. 10+