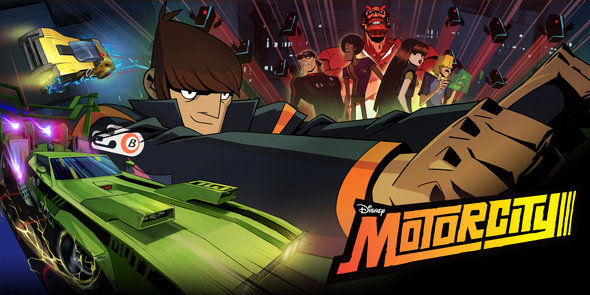 Plot: A man named Kane took over the city of Detroit, promising to turn it into a utopia only to build an entirely new city on top of it called Detroit Deluxe and strip the citizens of their freedom. In the old Detroit, now called Motorcity, people live in rough conditions, but at least they have their freedom. A team of rebels called the Burners are at war with Kane to reclaim Detroit and free the citizens above. Lead by the former Kane cadet, Mike, along with Julie, Chuck, Dutch and Texas, they have to utilize fast cars, futuristic weapons and high tech gadgets to win the war for Motorcity.

Breakdown: Hm, I sure have been reading a lot about networks screwing over their shows lately. I should take a break and watch a fun cartoon.

Wow, that was a lot of fun! Hm…I wonder why it only has 20 episodes.

Why do networks do this? Why do they even pick up certain shows if they’re just going to screw them over, sending them on a crash course towards failure?

Networks seem to do this to varying levels, and I don’t get it. You don’t want a show? Don’t pick it up. Why bother going through with production and airing if you’re just going to treat the show like garbage?

But for now let’s focus on the topic at hand, Motorcity.

Motorcity is no masterpiece. It has a pretty worn out plot, and even has a lot of cliché character archetypes at work (Except Texas, because Texas is awesome) but it’s a refreshing visual experience with a lot of style. It doesn’t seem to aim to be more than a really, really fun action show about cars.

And that’s fine. This is entertainment. It’s meant to be fun.

I had fun with this episode, and it does a decent enough job establishing all of the necessities such as the world they live in, most of the characters (I think they need to flesh out Dutch and Chuck more because they seem to both have the same job and personality quirks at this point.) the antagonist, the conflict and, right at the forefront, the style.

This is one of the more stylized shows I’ve seen in a long time. It’s simultaneously rough and very polished. It has a sort of ‘animated short’ feel to it, if that makes any sense.

The only problem I had with the style is sometimes the bright lights and lack of contrast in certain scenes makes it difficult to make out what’s going on in action scenes.

Oh and did I mention that Brendan Small of Home Movies and Metalopcalypse did the music for the show? And that Kel Mitchell came out of the woodwork to voice Dutch? AND that Mark Hamill voiced Kane? How can you cancel a show where Mark Hamill plays a villain? That’s blasphemy!

So what did Disney do to screw over this show?

I direct your eyeballs to this article.

To sum up – Motorcity got canned, before it even finished its first season, because of bad ratings. Understandable. But why did it have poor ratings?

1) The timeslot was moved around frequently.

Want to make it very difficult for people to follow a show they like? Screw with the time slot. How many times have you enjoyed a show and then tried to watch it on the time and day you thought it was on only to see something completely different and then have to look up the new timeslot because the network is too stupid, lazy or conniving to properly advertise the change?

Frequent time slot changes are also a sign that the network just doesn’t give a crap about the show. For a series where the first season wasn’t even followed through all the way, there’s no excuse to keep changing the time slot.

Also, this is something mentioned in the TV Tropes listing, but they also didn’t air reruns of the show until 2015 for no reason. The show initially ran in 2012.

2) The show went on hiatus right as it was gaining a fan base.

I have no idea what this hiatus was about, but that explains why it took nearly a full year to air a twenty episode long season. Hiatuses in a show’s infancy are incredibly damaging. You don’t want to pour water on a fire before the spark even catches.

3) The episodes were aired out of order.

This one is just bullshit. There’s no excuse for this. Why the hell would you air the episodes out of order? It’s confusing for the viewer and makes for a miserable experience trying to follow the story.

This one is something I found on the Motorcity Wikia’s petition page. I couldn’t find much info on this, and it’s so bizarre, so I thought I’d add it as a subset.

Is this implying that Disney knowingly leaked these episodes to damage ratings upon airing and then purposely aired all of the leaked episodes after the hiatus was over to further damage the numbers, because why bother watching something that was leaked online?

If that has any sort of credibility, wow….just wow. That is some evil schemeness.

5) Very little advertising or marketing for the show.

I remember seeing some advertising for the show, but it wasn’t as promoted as most new shows. Also, I don’t see how this show couldn’t be marketable. Cars, weapons, cool stylized gadgets, the works. I get the feeling like the Disney didn’t like the tone or theme of this show and didn’t want to associate themselves with it, which why it reportedly took ten years for Titmouse, the production studio, to get the idea through Disney.

It makes sense. Disney is far from gritty, grungy or edgy. Doesn’t make it right at all, though. Again, you don’t want something? Don’t take it.

The saddest aspect of this whole situation is that Disney still owns the IP of Motorcity, so even if Titmouse tried to revive it, they wouldn’t be able to. Reminds me of the fiasco with Making Friends and Nickelodeon.

Apparently, in 2013, Titmouse tried to have both Motorcity and another of their properties that was shafted thanks to network bullshit, Megas XLR (which was canned because the president of Cartoon Network didn’t ‘get it’. They also purposely ignored any efforts to have it revived, even on Adult Swim, because they felt it was a complete waste of money.) but that, evidently, didn’t work.

I absolutely hate when networks treat a property like shit and then chain themselves to the IP so they can keep it in their back pocket in case they can make money on it some day. Or just to be assholes. They take someone’s ideas and hard work and ensure that no one can ever do anything with it ever again, as long as they deem it so. That is so selfish and disrespectful of the creators I could scream.

Motorcity is a lot of fun and can be pretty funny sometimes, especially Texas. It has a lot of potential to be more than just a fun action show, and, for all I know, the next 19 episodes could prove to go above and beyond, but it was yet another victim in a sea of network sharks.