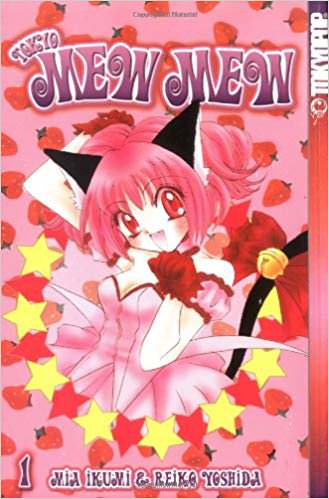 Plot: Ichigo Momomiya was a normal girl until she was chosen to be a part of the Mew Mew Project – an initiative created by Ryou Shirogane and Keiichiro Akasaka. Their objective is to combat the Chimera Animals created by the ‘alien’ Kishhu and protect the planet. Infused with the power of red data animals – creatures close to extinction – Ichigo needs to find the other Mew Mews and save the world.

I sure have talked a lot about Tokyo Mew Mew, haven’t I? Two full series reviews, an SDC, and I’m in the process of reviewing the second non-dubbed half of the series step by step. Ah well, you can’t say I’m not thorough. But, for the sake of brevity, let’s skip most of the things people already know and stick to the bare bones in regards to differences.

– Ichigo’s first kiss (even if it was accidental) was really with Aoyama, not Kisshu. In addition, it happens in the very first chapter. The kiss with Kisshu still happens, but the fallout of it is not seen until volume two.

– Every one of the Mew Mews is in the first chapter, which actually fixes the slight annoyance of them being nowhere to be found, even for a brief moment, in the first episode of the series where everyone gets their powers.

– Mint’s brief shot in her ‘debut’ chapter is pretty similar to the way it was in her intro episode. She offers Ichigo a handkerchief after she gets stuff on her face. However, she’s perfectly polite to her after that outside of sneering at her while leaving. Later, she teases her about her date with Aoyama, but she’s not being an ass like she is in the anime.

– Aoyama’s a bit crazy over environmental issues. He’s obviously passionate about it in the anime, but he’s aggressive about it in the manga. I don’t know if it’s the art, but that’s how it’s coming across.

– Lettuce is being bullied pretty badly by some bitches when she’s suddenly saved by Pudding. She manages to distract them for a while, and Ichigo is about to jump in when Zakuro grabs one of the bitches’ arms as she’s about to pour scalding hot coffee all over Lettuce.

– Mint also seems to have no idea who Zakuro is at this point. None of this is present in the series, which is a shame because it gives us a fairly decent intro to all of the girls, albeit a little convenient.

– There are some additional scenes that aren’t terribly important, mostly filling in some of the blanks that the pilot of the anime left behind.

– The setting of Mint’s Mew Debut (or De-MEW! Ahahahahaha!….Oh God, 4Kids poisoned my brain.) is different (it happened backstage at a ballet recital instead of at her house) but the circumstances are basically the same.

– Lettuce’s debut is a little different in that she’s being meaner in the manga, but that’s about it.

– Pudding’s debut is after the nocturnal animal exhibit date with Aoyama in the manga. In the anime, Ichigo comes across Pudding in the park after she’s gone grocery shopping for the cafe. (After several filler episodes)

– The kissing incident with Kisshu happens during her initial meeting with Pudding. She’s gushing over her cat ears when Kisshu ambushes and kisses her.

So far, I like what the manga did with the story better than the anime. The art’s cleaner, the girls are all a part of the story from the beginning (though maybe that diminishes a bit of the mystery involving who the Mews are) and there’s no filler so far.

About the only thing to note in regards to negatives are that Aoyama’s a bit more intense, though not often, and Lettuce was also slightly more aggressive, though it’s not a mainstay. Plus, I like that she bit the bullet and broke out of her shell a bit on her own at the cafe in the end. Nice slice of character growth.

Round One Winner: Manga