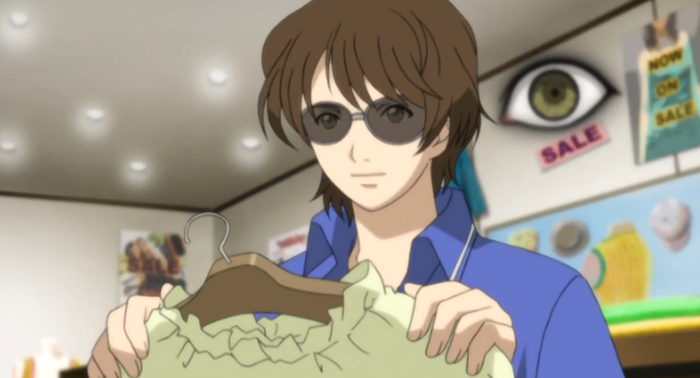 Plot: Maho wants to send her brother, Mikio, to hell for ruining all of her relationships before they even start. Though that’s just the tip of the iceberg….

Ya know, I never realized when I started this anime reviewing gig that I’d spend so much of my life talking about incest. And yet, here I am.

Let me backpedal a bit. Mikio is in love with Maho, but Maho’s either deeply in denial or she fully believes her given story, which is that Mikio forces all of her boyfriends to leave her because he feels she’s not pretty enough to have a boyfriend. Mikio is this super hot literal model and Maho, despite the cavalcade of suitors she appears to attract, seems rather ordinary.

Maho detests this behavior enough, and/or believes her brother secretly hates her anyway, that she calls Hell Girl.

She does learn the truth before she pulls the string, and, being fair, no actual incest is had here. He tries to sexually assault her, but she fights him off before he’s even able to kiss her. Later, it’s…kinda….vague, but there are hints that she might have romantically loved him back and she sent him to hell because they could never be in the same house knowing that about each other?….I dunno.

All things said, this seems like a boring episode, right? Let’s up the game, shall we?

Mikio is actually a crossdresser. At night, he masquerades as a beautiful woman named Miki. He’d dress up like a beautiful woman, which he could easily pull off, and he’d hunt down Maho’s new or potential boyfriends, hit on them and then spend the night with them on the condition that they break up with Maho.

How he pulled this off….I don’t know. Either he wasn’t going ‘all the way’ with these guys, not allowing them to discover he’s actually a guy, or….Maho has a habit of finding suitors who are bisexual…..or Mikio is so hot they didn’t care.

Ultimately, I honestly didn’t want this guy to go to hell. I doubt any sibling relationship can go back to normal after something like that, and attempted sexual assault is pretty bad, but I don’t feel like that’s instant one-way trip to hell worthy. It’s especially worrisome when you consider an odd detail near the end.

Maho’s mark is noticeably lighter than most of the curse marks you see and she claims she’ll be seeing him soon. Even though there are no other indications of suicide, and the candle at the end wasn’t nearly extinguished or anything, it seems to hint that she’s going to take her life either out of guilt or because she wants to be with him.

The idea that she felt the same way about him confuses me a little. If she did, then I don’t see what truly stands in their way. Their parents seem to be dead, and they can easily move far away so no one knows their connection.

If taboo is the issue then…..uhh…why not go for it? Calling Hell Girl (and then committing suicide?) seems like a much worse fate. At least if you gave each other a chance, you’d have some happiness before you, theoretically, went to hell.

I don’t really think she loved her brother romantically, but the question does hang in the air.