Skip to content
HomeSSBS – Tokyo Mew Mew Episode 37: The Shining Tear – Celebrating Christmas with Just the Two of Us

Plot: Ichigo is excited about spending Christmas with Aoyama, but quickly crashes back down to earth when she comes to the striking realization that she’s become used to lying to Aoyama about her status as a Mew.

She hates that she keeps having to lie to him, but can’t find a way to be truthful with him. Zakuro decides to take her Christmas shopping in the middle of the night to find a present for Aoyama. She tells Ichigo that presents are about conveying feelings in a physical form, since you can’t see someone else’s feelings for you. You’re sharing a piece of your heart when you give a gift, so giving a gift is just as much for you as it is the recipient.

As Ichigo thinks it over, a pendant catches her eye. Zakuro explains that it’s called ‘Tears for Christmas,’ and Ichigo decides that this is the gift she wants to give Aoyama. Zakuro lends her the money to buy it, Ichigo thanks her and they part ways.

Throughout that night and the next day, Ichigo remains unsure about her situation with Aoyama. She feels she’s become selfish and unfair to him. The next afternoon, when she’s set to meet him in the park, she lies and says she needs to go straight home before running off in tears.

That night, Ichigo continues to sink into a depression, believing herself to be not good enough for Aoyama. She soon remembers Aoyama’s earlier words to her about people doing the best they can little by little. She says that Aoyama’s so direct about everything, and she owes it to him to be the same way because she loves him with all of her heart.

The next day, she sends a message to Aoyama apologizing for her behavior at the park and confirming that she’ll keep their date for the Christmas tree lighting that afternoon. She arrives pretty early, but the occasion is already soured by the aliens who start blasting away at the city surrounding the tree.

Ichigo bolts to the scene of the destruction and takes on the aliens by herself. Kisshu asks her why she continues to support the humans when she’s already so much more like the aliens. She can’t communicate her feelings to humans, and they’ll turn on her eventually for being so different and powerful. He tells her she should defect from the humans and join them. Ichigo stands her ground firmly and proclaims that she doesn’t do what she does for praise – she’ll protect everyone no matter what.

Her intense emotions trigger a response from the Mew Aqua that was hidden deep within the city’s Christmas tree. Pai and Taruto praise Kisshu for seemingly having a plan that worked for a change, but Kisshu was serious in his pleas and is devastated that, once again, Ichigo has refused to go with them.

The other Mews show up to the fight, and Ichigo is more determined now than ever protect those she holds dear.

– So, even though they’re all custom-made hats, Ichigo gets a special strawberry Christmas hat (Which is, admittedly, adorable.) but Lettuce gets an oversized golf hat? And Zakuro gets a big puffy beret with dangly puffballs on it? And Mint just gets ribbons? I would call favoritism again…..BUT PUDDING IN A REINDEER OUTFIT! ADORABLE!~ 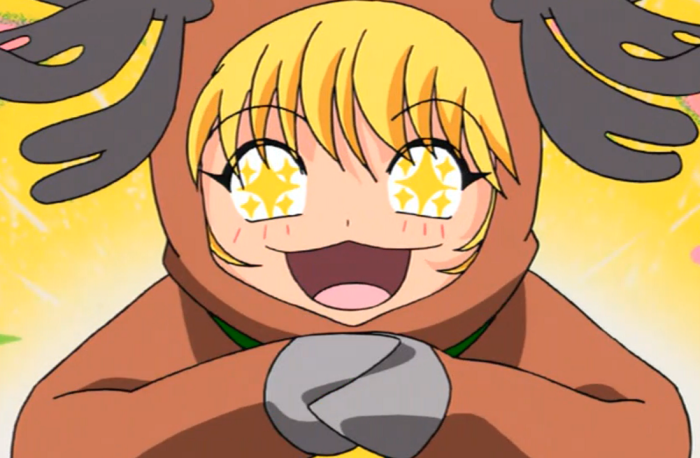 – I’ll admit, that daydream Ichigo had was really sweet and romantic. The ending was also a little funny. You just typically don’t see Aoyama have those kinds of cartoony reactions.

– I’m a little uncomfortable about these 13-year-olds speculating that their friend will have sex with her boyfriend over Christmas. Also, slow your roll, girls, they haven’t even kissed yet.

– Uh, animators, are you asleep at the wheel? Because Aoyama’s talking, you’re focusing on his face, but his lips aren’t moving.

– I don’t know if it’s the Jingle Bells playing in the background, but I can’t help but smile as Ichigo goes on yet another doofy love-fueled tirade in the café.

Also, nice sudden slam back down to earth. Not lying. Her suddenly knocking over the bucket on accident after Mint reminds her of her Mew duties, even after saying ‘everything always manages to work out.’ was a well-done tone shift, and it was one of the better commercial cliffhangers. The fact that it’s moreso about her becoming accustomed to lying to Aoyama and less about ‘oh yeah, I’m a Mew!’ is also a more interesting approach.

– That speech about presents and feelings was really well-written too. And I like the song in the background, even if it’s not terribly memorable.

– That necklace is butt ugly, though.

– Hahaha, Ryou running the café all by himself is priceless.

– Not lying, I burst out in laughter and ‘aww’s when I saw Mint and Lettuce in their reindeer outfits. 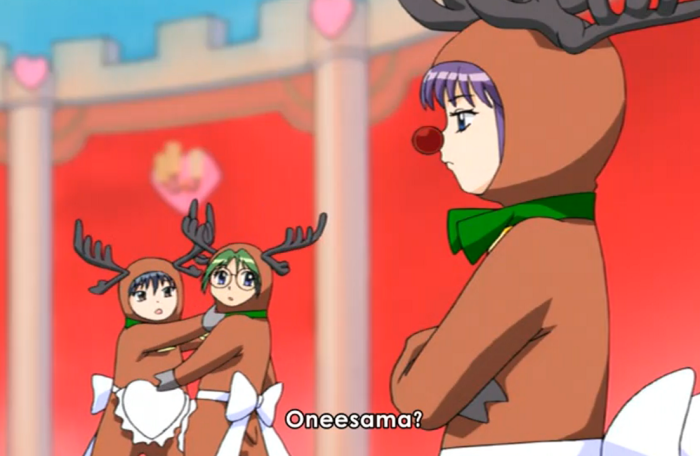 – Marks off for basically reusing the entire animation cycle of the scene in her bedroom just a few shots prior to this. All they did to change it was make it darker…

– As much as I hate to skew into a negative state considering this episode is so well written and directed…I can’t help but wonder how 4Kids would’ve royally screwed this one over.

– Do people typically have Christmas tree lightings in the day time? Every one I’ve seen is at night…so you can…ya know….see the lights.

– Aw, come on, the aliens are going to ruin Christmas? Bah humbug.

– See this is one of the things I like most about Ichigo. She has another set date for Aoyama, after giving him the brush off the day before, and, without a single hesitation, she runs off towards trouble, not even realizing it’s an alien matter. That’s the stuff of heroes.

– Kisshu’s speech about Ichigo not being able to communicate feelings to other humans is a little too on-the-nose. How did he know she was having trouble with that?

– Little cheesy that the Mew Aqua’s in a Christmas tree.

– The song for the next episode preview is a very nice gentle version of ‘Silent Night.’ This episode is making me so mellow…

So I kinda love this episode. The only gripe I have with it is that there are some occasions where they’re obviously cutting corners in the animation department, including one instance where they just straight up don’t animate, but it’s nothing too noticeable or bad enough to mark this episode off that much. The art and direction more than made up for any shortcuts they may have taken.

This is one of the best written episodes we’ve gotten so far. It’s a very realistic and emotional take on Ichigo’s whole situation, made all the more powerful because it’s happening around Christmas, when you’re supposed to be happy and sharing love with others.

I love the whole flow of this episode, too. While the beginning is the typical ‘yay I get to spend time with Aoyama’ stuff that we get a lot, the sudden shift in tone is very well-done and welcome. We’ve seen Ichigo get upset about lying to Aoyama before, but it hits her like a ton of bricks this time because she knows she’s becoming complacent in her lying, and she hates that. Aoyama deserves better, but she can’t bring herself to give it to him because she’s afraid she’s either not good enough or that he’ll reject her.

It’s a great moment when Aoyama’s own words help bring her out of that dark place and give her the confidence to go and be honest with him, and that surge of love and honesty giving her even more drive in her mission is a good moment of character development.

I also like that this is a two-parter because it allows the story development to have much better pacing than it otherwise would have. We need slower and more gradual developments, especially in plot lines like these, to give the changes some time to sit and resolve.

I was worried I might be biased in this episode simply because it’s a Christmas episode, but I don’t think I am. It’s truly a great episode, even if the other Mews are pretty shafted for a majority of it. They’re not nearly as shoved into a corner as they usually are, Zakuro got some nice moments and, come on, all but one of the Mews in reindeer outfits!…And Zakuro’s Rudolph!

Next episode, can the Mews save Christmas? Can Ichigo finally be truly honest with Aoyama? Is there a secret Aoyama’s somehow hiding as well?