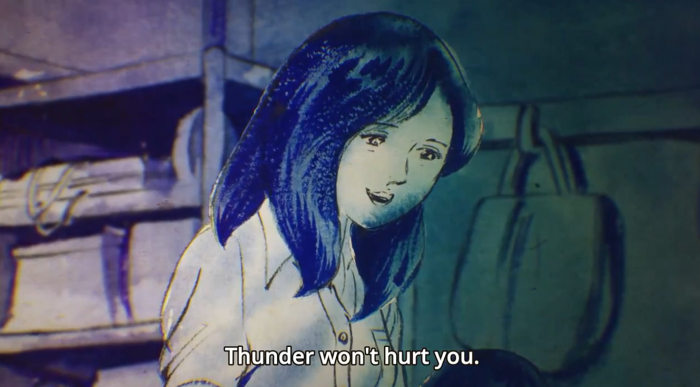 Plot: A teenage boy reminisces about his mother comforting him as a child during a thunderstorm. She mysteriously abandoned her father and him when he was five, but now she’s back to comfort her child during another thunderstorm.

Breakdown: Whoo! Animating Halloween starts now! Another year, another October and another season of Yami Shibai to give us even more chills this Halloween season.

This year’s Yami Shibai intros are done in a very foggy swamp-like area with the narrator being a floating mask with a shadowy body before he turns into the regular narrator. A changeup from the norm, which adds to the ambiance, but where is this?

This episode is extremely well-paced and creepy. At first, you think the mother is coming after her son for whatever reason, but the story takes a big left turn right at the end and gives us a twist I never saw coming. There are no jump scares (except maybe thunder) and it slowly rolls you towards the truth.

The artwork this time around was nice. It was washed out, which fit with the stormy theme, and was drawn in a rough combination of pens and crayons. It also had more slight animations like arm movements and flashlight movement than YS typically has.

I liked this episode. It has a great feeling of suspense. And if it’s any indication as to the quality of the rest of this season, I think we got some good ones ahead of us.

As for the ED this year, it’s jazzy and fun to listen to, though, like some other YS ending themes, it clashes a little with the tone of the series. 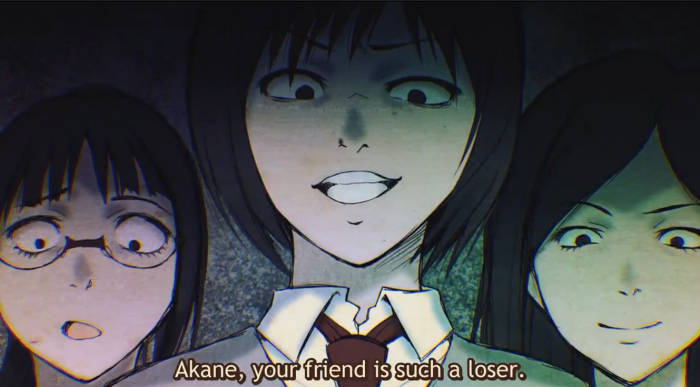 Plot: A group of teenagers are on a field trip to a cave when four girls decide to go off to a different part of the cave on their own. One of the girls, Tomoko, suddenly gets bullied by two of the girls, having been betrayed by her supposed actual friend, Akane. The girls push her to the ground and decide to investigate some strange noises deep within the cave. When Tomoko suddenly hears them screaming, she has to decide whether she should save them.

Breakdown: By media mandate, all teenagers are stupid and terrible.

Anyone disagree? No? Cool.

Teenagers in horror shows are particularly stupid and terrible, meaning you never root for them to survive. Poor Tomoko is the only one here you hope survives, and horror stories hate having any semblance of happy ending in recent years.

The story, while being alright, is also nothing to write home about. It’s one of a million ‘stupid terrible teenagers go somewhere scary they’re not supposed to go and they end up getting screwed because of it.’ stories. There was a predictable jump scare and some kinda creepy imagery, though it also wasn’t really anything most people haven’t seen before.

All in all, it’s middle of the road material.