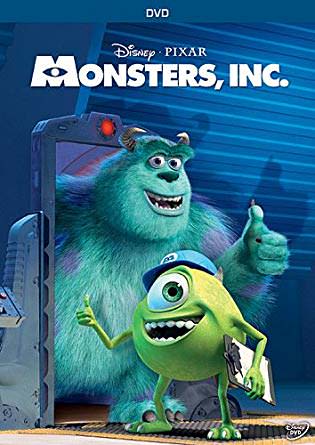 Plot: Kids always worry about monsters in their closet – and well they should be, because there are plenty of them in there. Behind the doors of every child’s closet is a portal to the world of monsters, and a company called Monsters Inc. is tasked with scaring children and collecting their screams as a form of energy to power their world. A small girl nicknamed Boo sneaks into the world of monsters causing panic within the city since monsters believe human children to be highly lethal to monsters. A monster named Sulley and his best friend Mike must return her to her room before she falls into dangerous hands.

Breakdown: Next up on the Pixar list is Monsters Inc. a beloved movie and a shining example of how creative and heartwarming Pixar can be.

I got Monsters Inc. for Christmas one year and I remember watching that movie over and over. It is a very original and creative concept to work with. Not only do they create a world of monsters behind the closet doors of every child, but they also need to scare children to collect their screams for energy. And if that’s not enough, there’s also the incredible irony that these scary monsters are terrified of humans to the point where merely touching an item in the human world can result in incredible panic of contamination.

I don’t know exactly why they believe that humans, children in particular, are so lethal to monsters. Perhaps it’s another matter of fear being born from ignorance.

This movie is dear to me, but I will admit it’s not as strong as Toy Story. It’s definitely their most heartwarming adventure so far, edging out Toy Story 2 just a tad in sadness and heartwarming moments.

It has plenty of funny moments, snappy dialogue and nice pacing. The story is also good, though the villains were a little too obvious. I like the twist of making laughter stronger than screams, the action sequence with the doors was awesome and beautifully done, the relationship with Boo and Sulley was cute and genuine, plus Boo is incredibly adorable and an actually realistic child, and it never felt like it dragged that much.

I love Pixar’s texture work in this movie, especially with Sulley, Randall and Boo’s costume. It’s hard to believe this is their first foray into working with fur. The art and animation are great, but I would’ve liked a tad more diversity with the background monsters. I particularly enjoyed the opening sequence’s animation because it was so creative and fun to watch. They got so much better with human characters. Compare Boo with how Molly looked in the first Toy Story…….eugh…..I still have nightmares.

The music’s a nice changeup from the norm, and it was very fitting and nice to listen to. The duet at the end with Sulley and Mike is great. I listen to it off and on to this day.

That being said, I do have some minor problems. While Sulley and Mike do bounce off each other nicely and seem to have a realistic relationship, I’m not in love with either character. Sulley’s a tad bit bland. Outside of being a gentle giant character, there’s not much else to him. Mike can be annoying on occasion, and there are times when Billy Crystal’s voice and shtick don’t sit well to me.

The relationship that Mike has with Celia really only makes for awkward moments while trying to keep Boo a secret, which, as a whole, is a negative to me because quite a bit of the movie is keeping Boo a secret, meaning there’s a good degree of awkwardness. Not terribly done, but awkwardness still irritates me.

Celia does one thing in the movie outside of being luvey duvey with Mike and that’s it, so she’s a textbook love interest character.

The way the doors work is a bit confusing as Boo is gone for a full day yet it seems like it’s possibly the same night she left when she’s returned. During the scene with all the doors, all the houses they enter are conveniently empty as well. These aren’t major issues, but they’re noticeable.

Bottomline: Some of Pixar’s finest work, but not without some minor issues. I really just have a problem with storylines that require hiding something from people. While it, thankfully, doesn’t amount to too much awkwardness, it’s still there and it still has a negative impact to me. If that doesn’t bother you or if you even think those situations are funny, feel free to bump the rating up a few decimal points.

Recommended Audience: There’s a couple instances of pee jokes, burping and, while he doesn’t have anything down there, there is a nut shot gag with Mike. Some minor scary situations, especially in regards to that damn machine. I mean, wow, strapping children into a chair and sucking the screams out of them? That’s something out of a horror movie. 6+