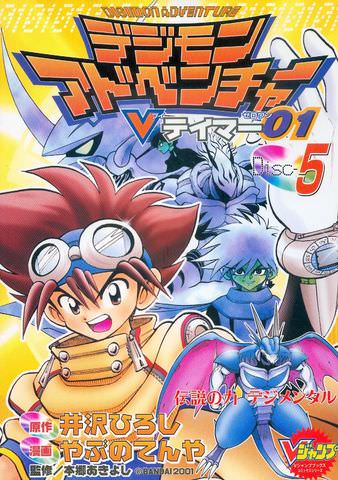 Plot: Neo, Arkadimon and his army have reached Holy Angel Castle, and Taichi and Zero are miles away. Leomon and HolyAngemon are the only ones left to defend the castle. However, Arkadimon proves to be just as fearsome as Neo claimed. Meanwhile, Hideto, the last Alias, and his Digimon, Omegamon, take Rei away to Demon’s castle and leads her to Neo – her brother.

Breakdown: No real notes between manga and anime.

A lot of stuff happens in this volume, but also not really. Half of the volume is taken up by Leomon and HolyAngemon’s efforts to keep Neo away from Holy Angel Castle. Despite fighting very honorably and well, they get tossed aside depressingly easily, especially HolyAngemon who unleashes his true power as Seraphimon for the sake of this battle. I think his match is actually shorter than the one Leomon had.

Plus, it’s just increasingly annoying how cocky Neo is about every match. He’s not slightly worried about Leomon or HolyAngemon. He doesn’t even break a sweat when Seraphimon emerges. In fact, he went there specifically for Seraphimon’s energy to help Arkadimon evolve further.

By the time Taichi gets there, Leomon and HolyAngemon have long since been defeated, but he still manages to get a few blows on an even further evolved Arkadimon before Neo decides to leave.

The big part of this volume is the half with Rei, Neo and Hideto. We learn that Rei actually has the Digimental on her, which is essential for evolving Arkadimon to Super Ultimate. It’s also revealed that Rei is Neo’s sister, and we even get the whole backstory on why Neo’s doing all of this.

Once upon a time, Neo, Rei and Hideto were all close friends. Hideto and Neo had a slight Digimon rivalry going on, and they enjoyed battling and talking about Digimon. One day, Hideto tried to convey the good news to Rei and Neo that he was able to merge his WarGreymon (Warg) and MetalGarurumon (Melgs) into Omegamon. However, Rei ran across the street to hear Hideto’s news and got hit by a truck.

Her legs were severely injured, and the doctors claimed there was nothing they could do for her. The only reason Rei can walk in the Digital World is because the physical limitations don’t carry over. Neo’s plan is to make an entirely new world from scratch by merging the real world and the Digital World, giving Rei back her mobility and allowing them to return back to that innocent time where they were all happy.

At face value, this seems alright, but once you mull it over, it’s pretty damn stupid. First of all, it’s never explicitly stated that Rei will never heal and will never be able to walk again. The shot of her after her accident just has two casts over her legs. Usually, if the injury to the leg is so extreme that walking in the future will be an impossibility, amputation would almost certainly be necessary. (Anyone with medical knowledge, feel free to correct me.) It’s possible that she has a spinal injury, but they don’t even imply properly if that’s what it is.

Second,…..really? Destroy the Digital World and the real world….to give your sister her mobility back? Don’t get me wrong, it’s noble that he wants to help his sister, but he’s willing to sacrifice the lives of countless humans and Digimon….to give Rei the ability to walk again. Even though, for all we know, she could someday recover and regain her mobility?

Guys, you can live a perfectly fulfilling life in a wheelchair. It’s not like Rei was an upcoming soccer star or they established a dream that required walking. Wouldn’t it be a better idea just to bring her to the Digital World to let her walk and enjoy her mobility again? Rei doesn’t even seem that excited or impressed that she can walk again. We don’t even know how long she’s been injured. She doesn’t really look any younger in the flashbacks.

Our final chapter of the volume ends with Taichi and Zero fighting Hideto and Omegamon. The battle’s okay so far, but this is also a bit of an info dump. This time we’re learning about Zero. Not only do we learn why Zero is so different from other Digimon and why he gets so immensely powerful when he’s emotional, but we learn that his time in the land of the living may be a lot shorter than they ever anticipated. Not by battle, but by health.

The match ends right in the middle with Zero getting one good shot off, but Hideto being anything but fazed.

The first half was lackluster completely one-sided battles that feel unsatisfactory simply because they had to rush things along to get the plot furthered, and the second half was mostly an info dump. It was an interesting info dump, but it was still an info dump.

In the end, this volume is a mixed bag on both sides, essentially being more buildup, but the reveal of Neo’s backstory and Rei’s connection to this whole thing were necessary information. Despite some problems with his reasons, it’s good that he at least has a somewhat solid motivation. The thing with Zero kinda came out of nowhere, though.

Recommended Audience: It’s more violent and has more blood than probably any other volume, which is odd considering it definitely doesn’t have the most fighting of all the volumes. Maybe I’ll bump it up a year. +8

Next volume, the battle against Hideto and his Omegamon heats up. Will Hideto fell Zero and Taichi or will his own Digimon give him a change of heart?