Plot: Akasaka has baked a special cake for the birthday of a girl at a local daycare named Momoka. When Ichigo delivers it, she refuses to eat it because she’s watching her calories so she can grow up to be like her idol, Zakuro. While all of the other kids happily eat the cake, Momoka goes off on her own to dress up like Zakuro.

That evening, Mint gives Zakuro and Ichigo a ride home. They see Momoka at the daycare all alone on the swings and wonder why she’s there so late.

Later, Zakuro goes out to dinner at a fancy restaurant with some colleagues when she spots Momoka alone at a nearby table. A cake in the middle of the table indicates that this is meant to be her birthday dinner, but her parents are running late. This scene reminds Zakuro of all the times she spent eating dinner at home alone.

Some time passes, and Zakuro overhears that Momoka’s parents are so busy with work that they can’t make the dinner. Momoka refuses to have any dinner herself and runs out of the restaurant.

Zakuro follows her and finds her crying against a tree. She happily surprises Momoka and asks what’s bothering her. Momoka explains her situation, and Zakuro tells her that her parents may seem uncaring, but they love her much more than she’ll ever realize. She dries Momoka’s tears with her handkerchief and gives it to her as a birthday present before offering to share a nice dinner together.

Momoka heads home and goes to sleep. As she rests, her parents visit her in her room and her father reveals the birthday present he bought her – a beautiful pendant emblazoned with gems. Since she’s asleep, he decides to give it to her the following morning.

That morning, her parents apologize to her for missing her birthday dinner, but they give her the pendant as a late birthday gift and promise to spend the whole day at her daycare’s parents day event that afternoon.

Meanwhile, the Mews are sent by Akasaka and Shirogane to follow some leads on Mew Aqua sources. They stumble upon the picnic of the parents event for the daycare and notice that Momoka is not there. She has wandered away, refusing to partake, because her parents are yet again too busy with work to show up.

Momoka suddenly loses the handkerchief Zakuro gave her into a nearby stream. Kisshu shows up offering to help retrieve her handkerchief in exchange for the pendant her parents gave her, but she refuses. Kisshu relents, but claims she’ll never leave the forest or see her parents again if she doesn’t comply. Kisshu offers a different deal – give the pendant to him and he’ll immediately send her back to her parents.

Momoka’s about to give him the pendant when Zakuro shows up, having rushed over when she found her handkerchief in the stream. Kisshu knocks down Momoka and takes the pendant, which they suspect has Mew Aqua within it.

Zakuro transforms and is about to attack, but Kisshu uses Momoka as a human shield. Pai and Taruto show up to help, and Taruto constrains Zakuro with vines. Kisshu checks to see if the stone reacts to the Mew Aqua piece they have, but it fails.

The other Mews show up, and Mint frees Zakuro from the vines with her Ribbon Mint Echo. Pai and Taruto leave since there’s no Mew Aqua. Kisshu’s about to follow, but Zakuro uses her whip to nab him out of the portal at the last second and punch him square in the face.

Kisshu is too intimidated to continue, so, frustrated, he leaves.

Zakuro wakes Momoka up and gives the pendant and handkerchief back to her. Momoka thanks her, and says she had a dream about Zakuro fighting a bad person to save her. She wants to be strong just like Zakuro when she grows up so she won’t get so lonely when her parents aren’t around.

Suddenly, Momoka’s parents show up. They brought some lunch for a picnic and happily reunite with their daughter. Lettuce deduces that her parents will never want to leave her alone again, and Zakuro wishes her the best as she looks on at the happy family.

– Not sure if this was intentional, but I think it’s cute they gave Momoka a fruit themed name too, like all of the Mews. Momoka can be translated as ‘peach tree flower’

– Wow, the budget got amped up in this episode for some reason. I feel like I have to assume it’s because of Zakuro. Wouldn’t want an episode centered on the model to look weird.

Seriously, though, Aoyama looks like he’s way older than he is when the animation is bumped up.

– Points for them actually giving a good message about the dieting thing, especially considering this is a little kid.

– Momoka’s bedspread is covered in pomegranates….That is too adorable.

– I really like the song break they have in this episode. It’s a very relaxing song.

– I want that pendant. Like…bad. It’s like a jewel encrusted dream catcher.

– I love the girls’ reactions to Shirogane saying they can find the Mew Aqua since their bodies react to it. Plus chibi Akasaka and Shirogane, come on. That’s too adorable. 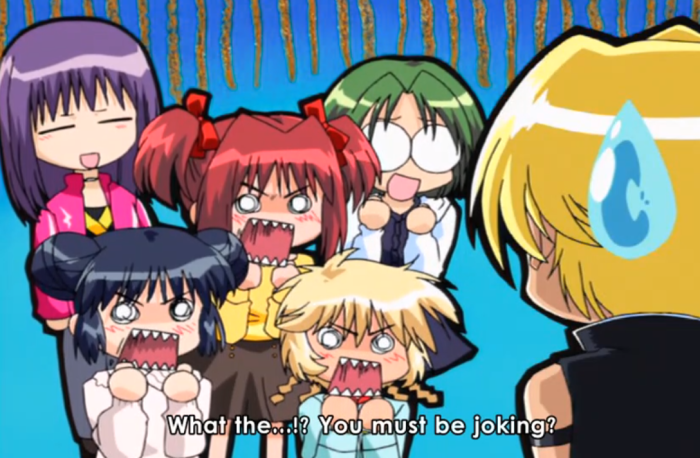 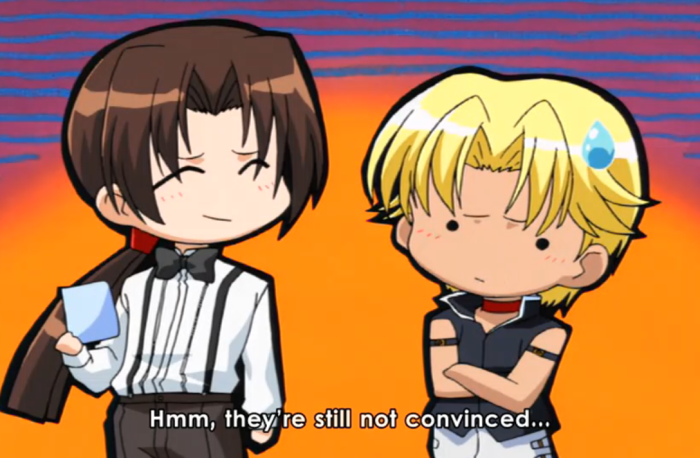 They do have a point, though. They’ve suspected lots of things as Mew Aqua but their bodies never reacted and no one discredited the suspected Mew Aqua because of it. They haven’t had a Mew Aqua reaction since….the first season finale, I believe.

– Even though her parents love her and mean well, they really have to stop promising to be at places and events that they very likely won’t be able to make. Broken promises sometimes hurt a lot more than just straight out saying this thing can’t happen.

– Lettuce: “Sad moments have always created the strongest reactions with Mew Aqua.”….Can someone verify this? Because I don’t think that’s right.

– I was going to give Kisshu points for not just knocking down Momoka and taking the pendant, but then he does it anyway when Zakuro shows up. Why even bother with the fake-nice ploy?

– They put in Zakuro’s full transformation barring her pose in the end? Why cut out that one part?

– It’s getting really tiresome to keep having ‘This might have Mew Aqua in it!….Nope, it was just a plot device.’ plots….

– Yay, Zakuro being her badass self! You yank him out of that portal he technically has no reason to use and punch him in the face! Whoo!

– Plus that glare to him at the end – Pure awesome. Someone please make a spin-off show with Zakuro as the leader.

– Kinda have to wonder why Kisshu never tried to use Momoka’s spirit to make a Chimera Animal, though.

– I love how he’s so offended that Zakuro hit him in the face.

– And Ichigo got to do nothing! Yay! I know that seems kinda mean for me to be excited over, but it’s so refreshing to not need Ichigo to pop up and take the final glory. Mint is the one who saved Zakuro from the vines, even.

– Lettuce: “Those parents won’t ever want to leave Momoka-chan by herself again.” Uhm….no. I’m sorry. I hate when they do these throwaway lines for serious problems just because we’re running out of time. You have absolutely no way of knowing this event changed them. She got lost for all of, maybe, a half hour, and they never find out her life was in danger.

You can hope she’d be more open with her feelings and that her parents would try their best to always have at least one of them home with Momoka when she’s alone, but these things take time. You can’t just assume they’ll fix such a problem so easily.

Also, this may be the subber’s fault, but I doubt they ever ‘wanted’ to leave her alone in the first place. It’s obvious they want to spend more time with her, they just preoccupy themselves with work too much.

– Why does Zakuro suddenly have bright pink lipstick on?

All in all, I really liked this episode. Zakuro shines a lot here, especially in her badass moment at the end. We didn’t get much into her past, which I would’ve appreciated, but that’s alright.

Momoka’s a bit of a brat at first, but she kinda has a right to be, at least at the level she is. I think she spoke a bit too harshly to Ichigo for no reason, but it’s understandable.

I am so appreciative that they fully made this a Zakuro episode without skewing the focus to Ichigo for no reason. We don’t even get a tiny bit of the other girls transforming. It’s Zakuro’s show here.

I’m still confused as to why no actual Chimera Animal was created. I’m even more confused as to why Taruto needed three of those parasite aliens just to make a few vines move. I’m fine with it, though, because even in the absence of a big battle, that punch and glare from Zakuro were too good.

It was predictable how this would turn out, but, again, that’s okay. I’d like it a bit less wrapped up with a neat bow, but what can you expect?

Next time, Shirogane’s past and the background of the Mew Project is revealed.