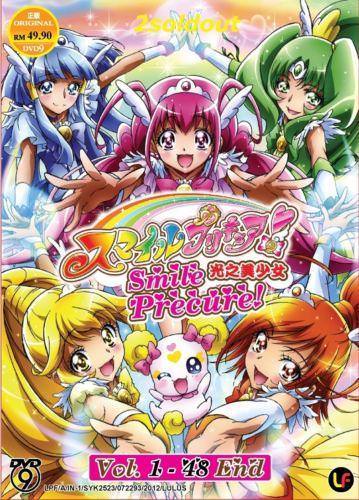 Episode 2 – On Fire! The Hot-Blooded Cure Sunny is Here! (Kelsey Gets a Makeover)

Episode 6 – The Team is Complete! Smile Precure! (The Library of Legends)

Episode 7 – Where Could it Be? Our Secret Base! (The Perfect Hideout)

Notice: I’ve decided to end this review series in order to put focus on other projects. If you’d like to see fantastic reviews and Sub/Dub Comparisons for this series, please check out my friend’s blog GlitterInformer.

Plot: Miyuki Hoshizora is a lover of picture books and is enamored with their happy endings. She hopes to find happiness in every day. One day, on her way to her new school, Miyuki sees a picture book fall from the sky. A mysterious little creature named Candy pops out and greets her before running off in search of something called ‘Precure.’ At school, Miyuki meets some new friends in Akane, Yayoi, Nao and Reika.

Miyuki catches a peek at Candy outside of school and goes around the building to investigate. In the library, she stumbles upon a portal to a strange room where she’s able to see Candy flying around outside again. She triggers another portal and is able to catch Candy who warns her of the appearance of the evil Wolfrun – a monster hell bent on causing a Bad End for everyone in the world.

Determined to protect Candy, Miyuki unleashes the power of Cure Happy and takes down one of Wolfrun’s monsters. There are four more Precures to find in the world, and they’ll need to assemble all of them to save Candy’s world.

Breakdown: Okie dokie, so I was kinda arguing with myself over whether this series subverts tropes or walks right into them.

On one hand, you have an incredibly formulaic opening scene, then Miyuki assumes that this day feels like one in which a fateful encounter will happen right around the literal corner – and it does.

She’s a bit of an airhead, but seems different than a lot of main leads in that she’s determined to protect people from the get-go and doesn’t need a few days on superhero training wheels to get right into the fray. Sure, she runs away and screams that she’s scared, but she’s also very determined to not just sit there and give up. She is firm in the idea from the very start that people can change their destinies for the better if they just try.

The fact that she’s an picture book lover is also a bit of a surprise. I’ve never seen a magical girl anime have a book-loving lead. And, while it is a little corny, hearing why she loves picture books was pretty inspiring.

The theme of this show is interesting. With books being a recurring theme, it’s only fitting that we have a big bad wolf enemy, but they go even further by making a monster out of a significant part of the Three Little Pigs story, a house, and having his goal be to force everyone into having a Bad End for their lives. He sends them spiraling into a very depressive state and wants to leave them doomed to never finding happiness – the exact opposite of the well-known happy endings of storybooks.

Having a villain themed like this also makes her alias, Cure Happy, all the more fitting. And my god, it is so nice to have magical girl characters with aliases again. They’re still not wearing masks, but they get different haircuts, so that’s about as good as we can get.

Also, thank god for the magical girl transformation sequences…..even if it’s so girly my face might collapse. I mean…I get the target audience…but…using a compact and a makeup puff to put on her outfit?

In regards to things I think are more on the bad side, what the hell was up with that character introduction scene? They literally went through each of the Precures in terms of their names and what makes up their characters one by one in immediate succession to give Miyuki….samples on how to introduce yourself? Show, don’t tell, Smile Precure….

Also, why do all of the characters have different school uniforms in some ways? Defeats the point of having uniforms at all, doesn’t it?

After that, it’s pretty basic and paint-by-numbers. That doesn’t necessarily mean ‘bad,’ I still had fun with it, but it follows the general magical girl formula. Enemy shows up, threatens someone, main character has to transform to stop him, enemy creates a monster from something nearby, transform, ahh what’s happening?, she uses her attack and is now on a quest to save the world.

Also, final note, I realize now that this format wasn’t the way this show was suggested to me – it was meant to be an SDC in conjunction with the dub, Glitter Force, but I think I’ll still have this going alongside the SDC. Sorry about the mixup!