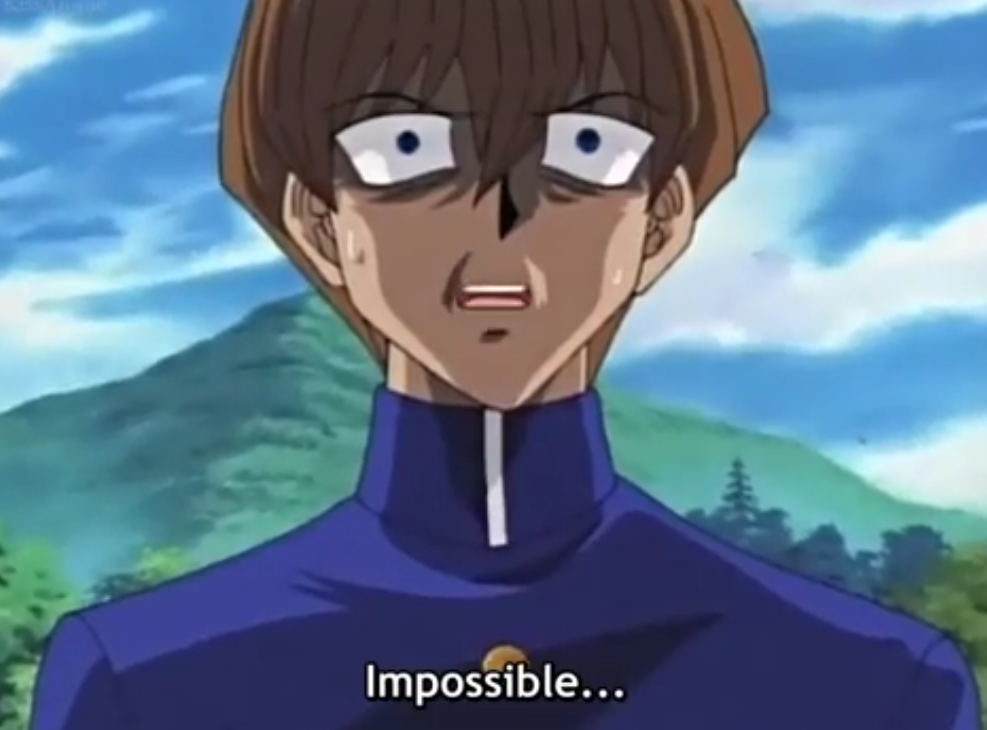 Plot: Yugi is finally gaining some ground on the fake Kaiba thanks to the real Kaiba helping him out. Can the combined efforts of Yugi and Kaiba stop the fake, or will the Blue-Eyes prove too powerful for them to take on?

When they recap the scene before the commercial break (when Kaiba says “Yugi!”) They impose another Millennium symbol on Yugi’s forehead. They didn’t do it before the commercial break….and they redubbed the scene for some reason after it, so I dunno. I guess the Millennium Puzzle mixed its powers with the heart of the cards and killed a virtual dragon. 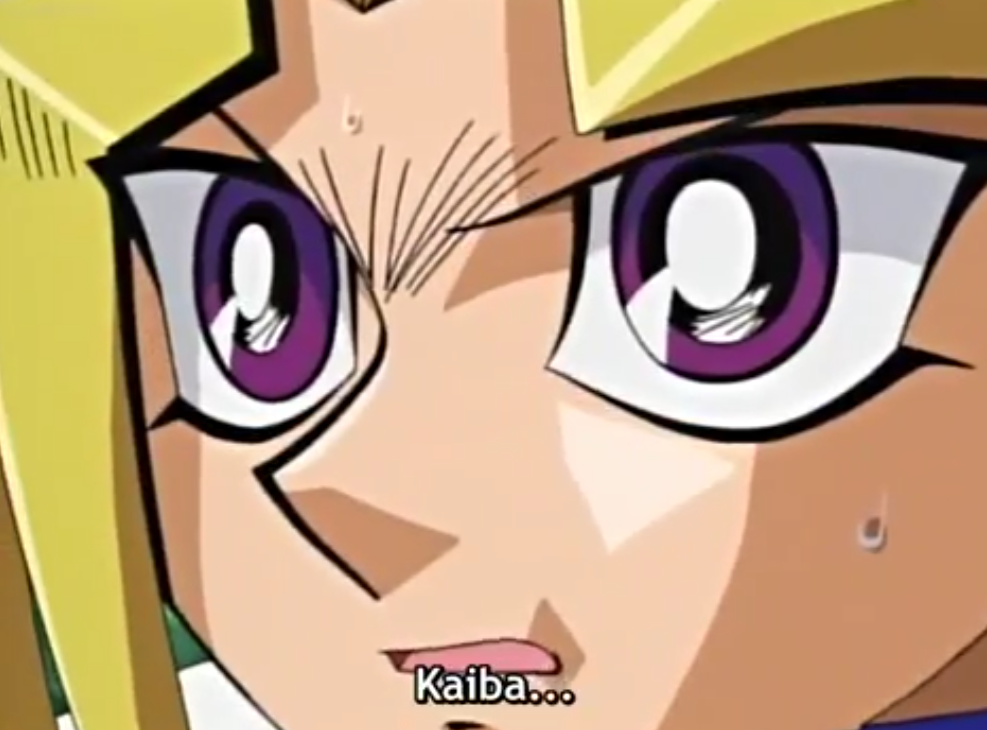 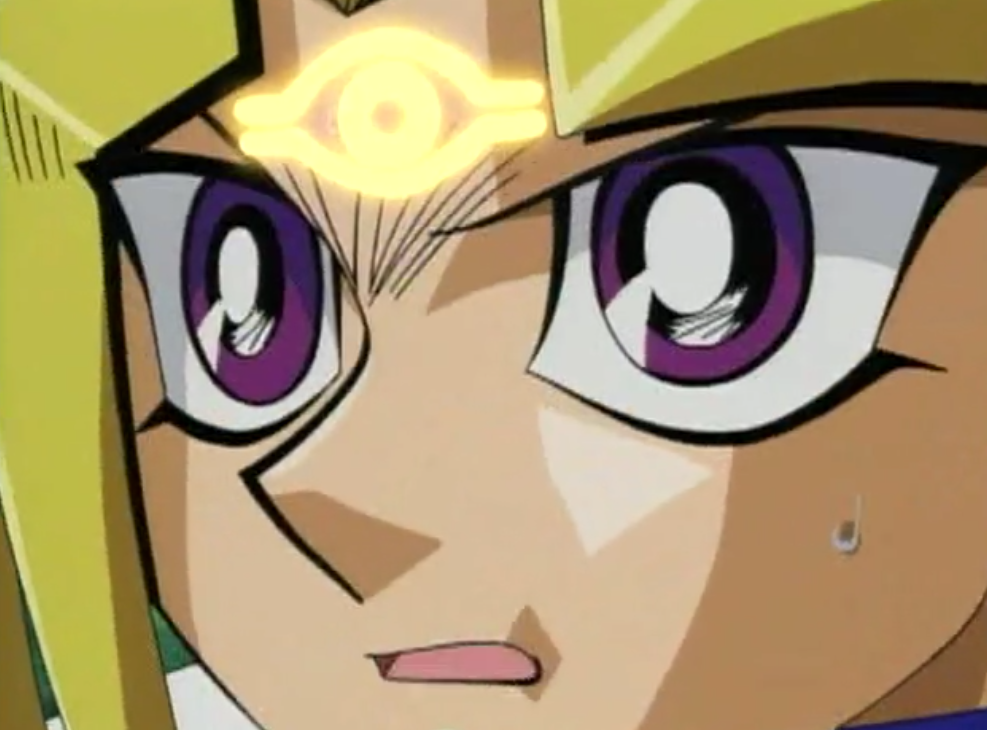 Like I mentioned in episode nine, the fake is not a ghost nor is it the ‘evil’ part of Kaiba. 4Kids injected a flashback of Yugi’s mind crush from episode one into this episode to push the concept of Kaiba’s evilness even further. Because making kids believe that evil can infect them is much better than an impostor dressing up as another person.

Also, why would Kaiba’s ‘evil’ part look like that? Wouldn’t it just look like Kaiba only evil, like he looked before? Or are we doing the tried, true and stupid ‘ugly=evil’ bullshit?

Side note – The music used for the fake when he reveals himself is hilarious in the original. It’s like some sort of Runescape music. 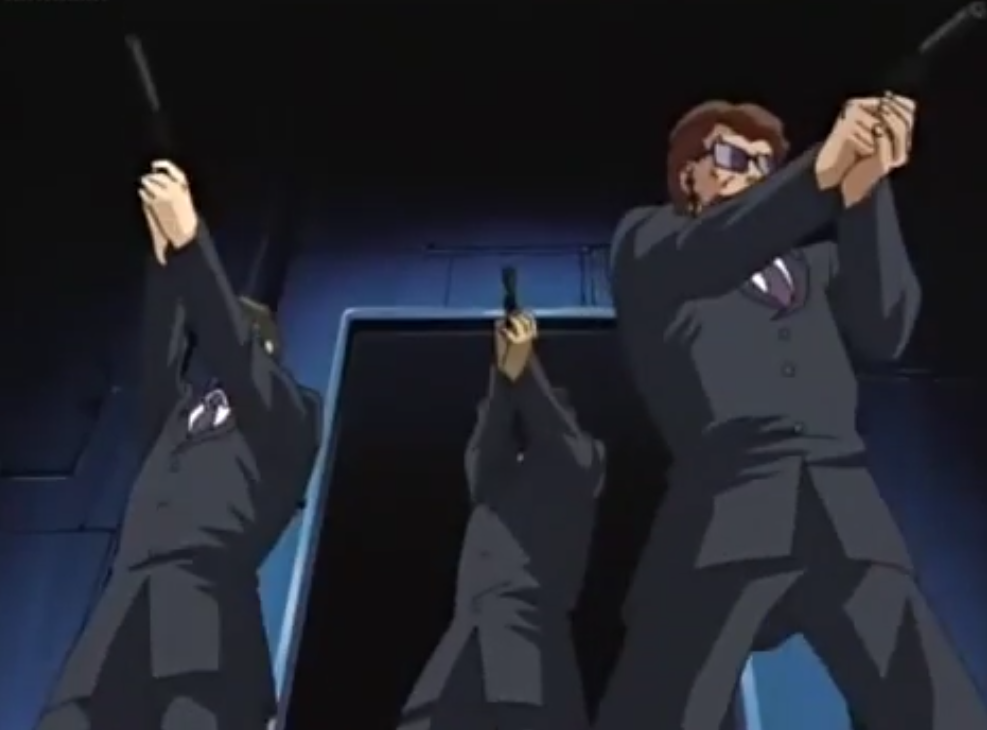 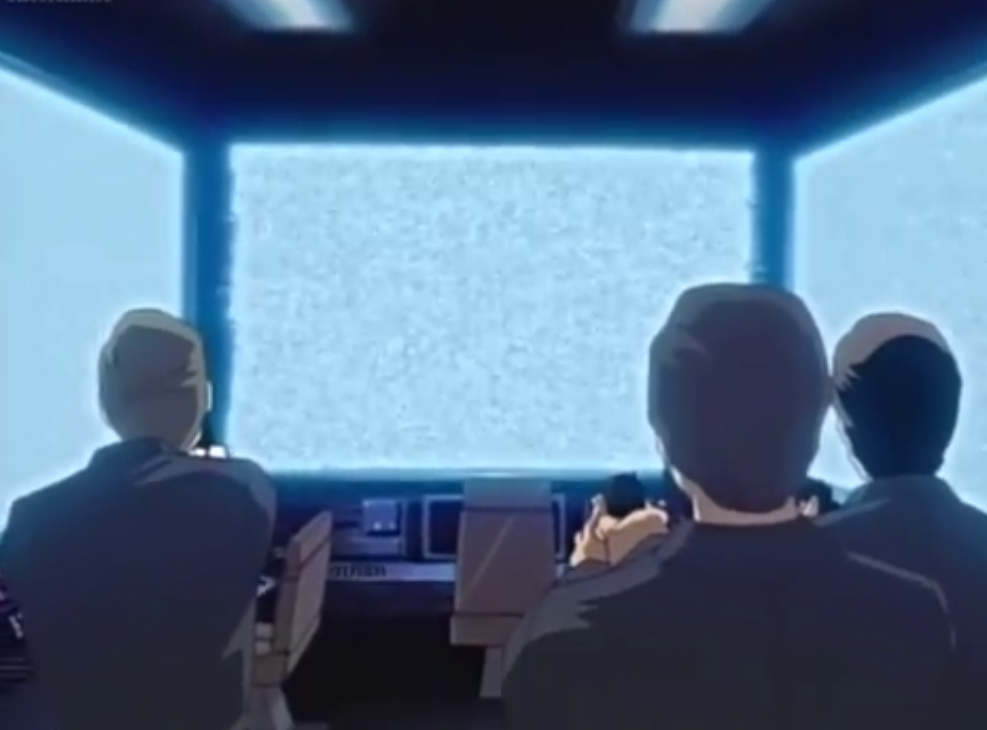 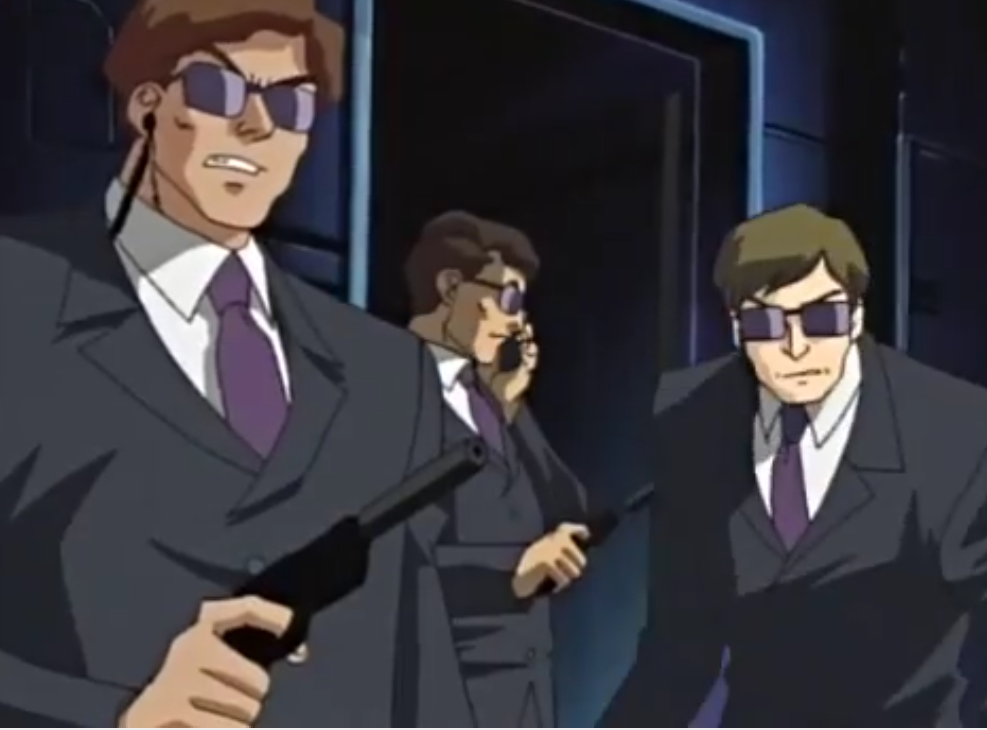 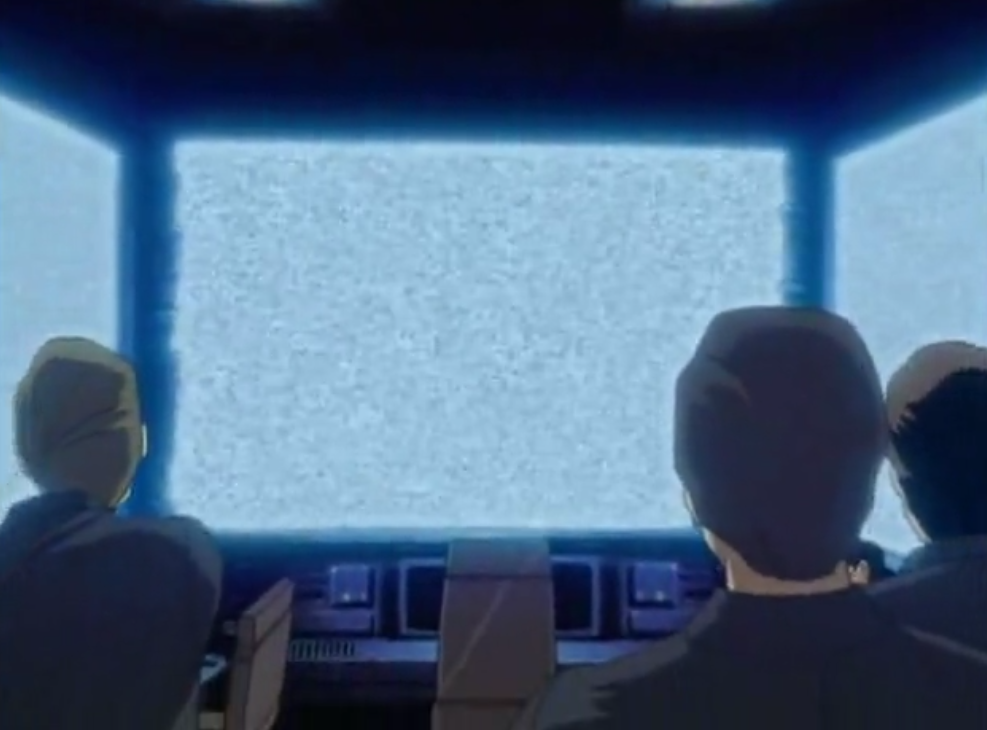 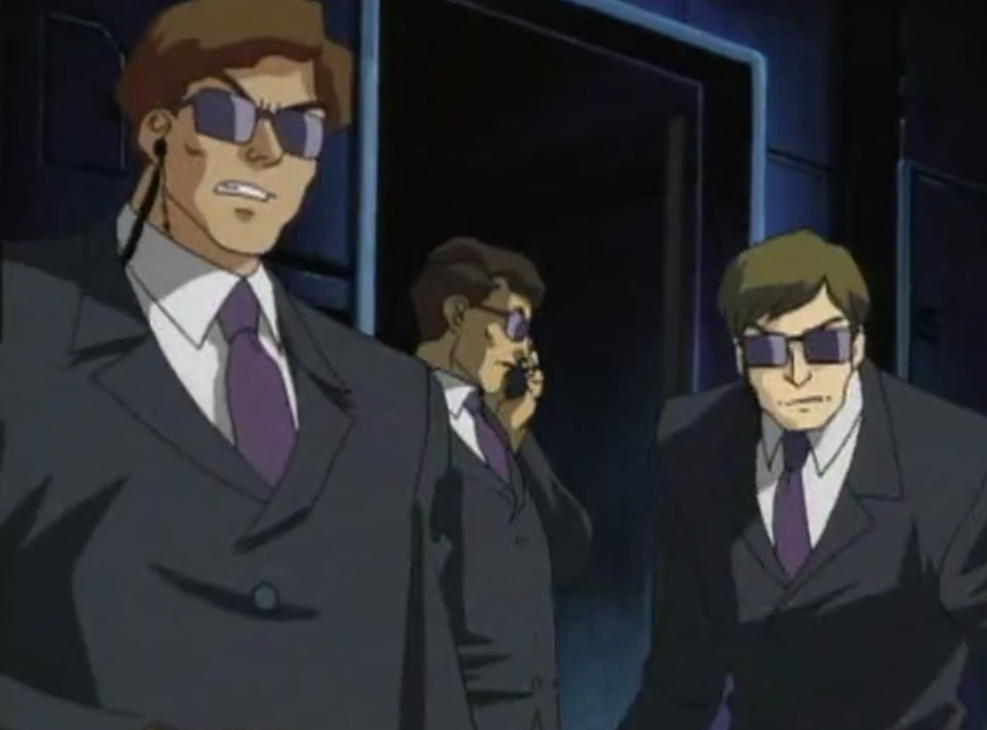 I actually have to give them props for this edit because, if you didn’t know the original, you’d probably never know they had guns.

Pegasus threatens Croquet in the dub after he finds out Kaiba is still on the run. In the original, he says it’s not an issue and to just enjoy the duel.

When Kimo turns his head, he’s actually thinking to himself in the original. In the dub, they change it to Pegasus contacting Kimo on some radio telling him to not let Mokuba go no matter what happens. This makes what happens in the end much less of a surprise.

It’s not the first time they’ve dubbed in the radio thing either. The first time Pegasus talks to him over the radio is a dub insert as well. In the original, it’s silent.

They edit out a scene in which the fake Kaiba pulls his cape over his head and suddenly changes his face to look like Pegasus to mock him. I guess they thought this wouldn’t make any sense since the dub fake is Kaiba’s evil self and not a guy in a suit. 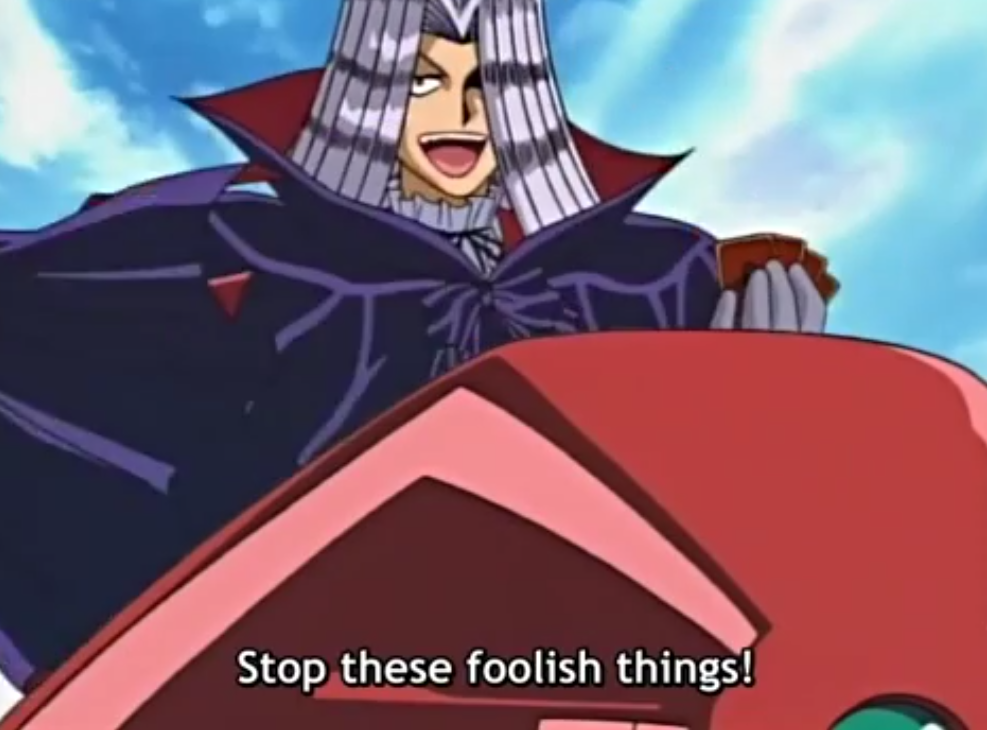 Mystical/Holy Elf doesn’t have any special abilities nor does the Book of Mystic Arts grant any abilities beyond increased attack strength. Thus, Mystical Elf couldn’t have transferred its attack power to the Blue-Eyes. Duelist Kingdom logic is fun.

4Kids edited out the wine on Pegasus’s hand after Yugi has that awesome speech. I guess they thought it looked like blood? 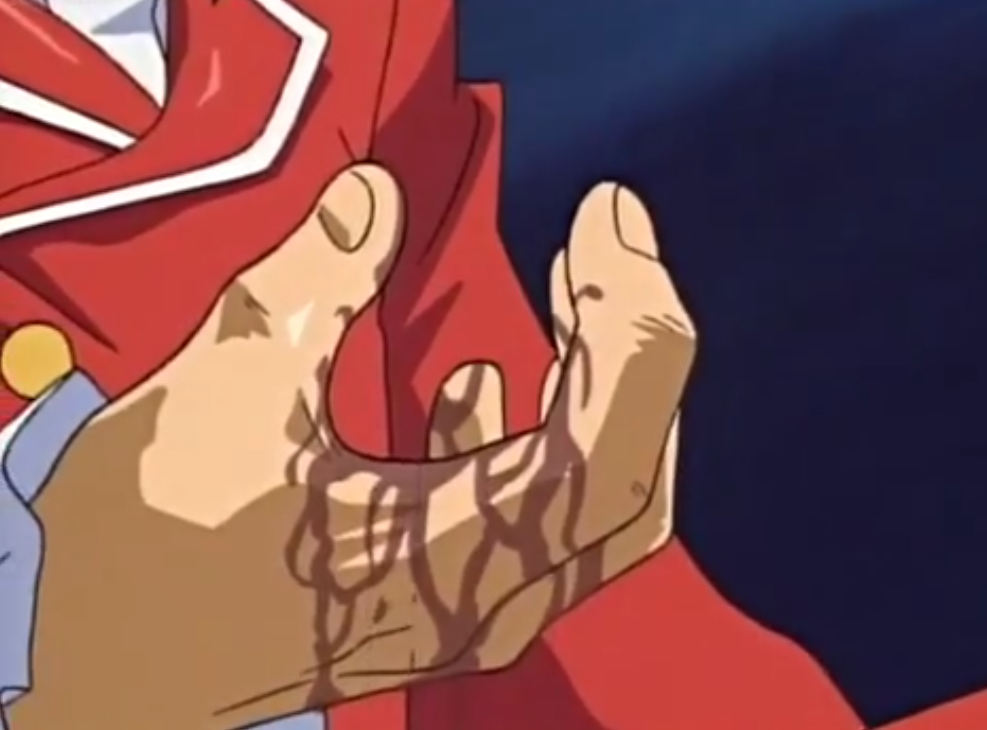 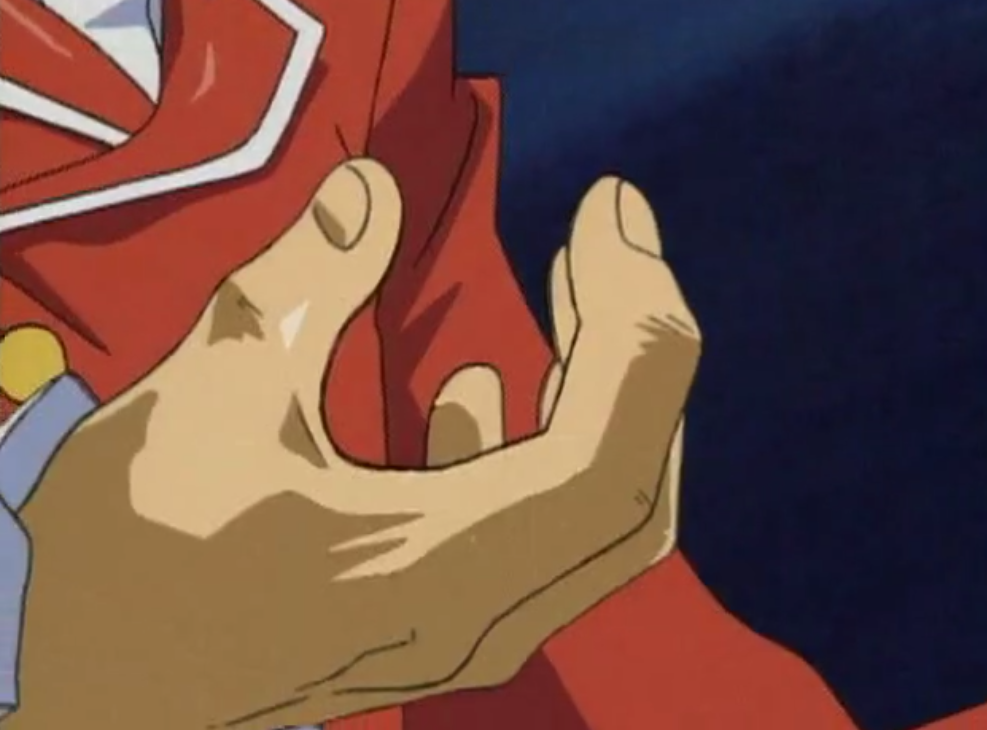 This episode wasn’t as fun as the last because Kaiba quickly needs to run and doesn’t help Yugi anymore, so there’s no cool rival matchup after a short while. Without it, it’s kinda boring. Even with Kaiba’s deck, you know Yugi won’t lose to some goofy hired duelist. After all…not even Kaiba can beat Yugi with Kaiba’s deck.

Next time, Jonouchi Vs. Ryuuzaki!