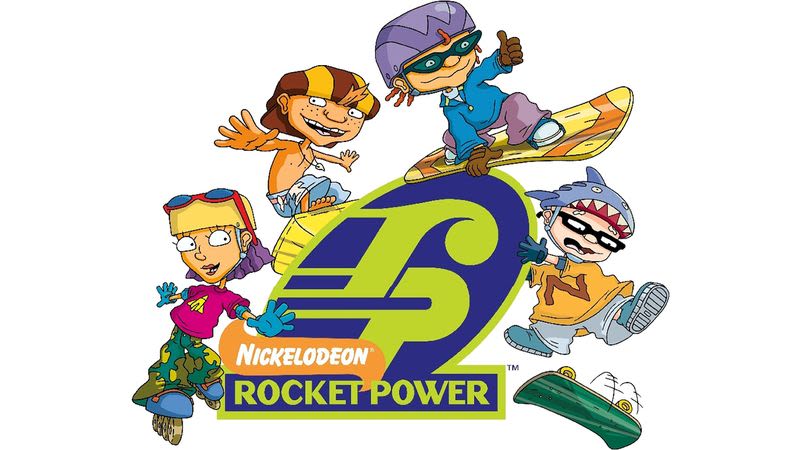 Plot: New Squid on the Block – In the beautiful California town of Ocean Shores lives Reggie, her brother Otto and their friend Twister. They all enjoy a wide array of extreme sports, but are unable to play street hockey since they don’t have a goalie. A meek and intelligent boy named Sam Dullard moves in across the street, and while Otto and Twister are quick to mock him for his nerdiness, Reggie welcomes him, and he even helps her with her long awaited magazine, The Zine. They try to include Sam in their hockey game, but he flails all over the place, scared to death of the puck and getting hit by the other boys. However, they realize Sam has a talent for blocking pucks and makes him their new goalie.

Down the Drain – Reggie is a housesitter for Mr. Stimpleton as he goes on vacation with Violet. She’s especially tasked with the very specific care of his high-tech pool. However, Otto and Twister have better ideas for the pool.

Breakdown: It’s always nice to go back to a show where you practically have a running teleprompter in your head scrolling down the script as you watch an episode. That was how I felt while returning to Rocket Power. I never realized how much I memorized this show. It’s not that hard to believe since I did love Rocket Power and it was on Nickelodeon all the time, especially in summer, but it’s just not one of those shows I think about too often.

Sadly, I kinda understand why.

Addressing the first half of the first episode, we’re introduced to Sam, known more ‘affectionately’ as the Squid of the group. Sam is a perfectly nice young man, and that’s exactly his problem according to Otto and Twister. They rag on him throughout the whole episode, especially Twister, though he warms up to him when Sam inherits the Squid moniker that he initially had.

Squid is not really given a full definition, but from what you can gather from the show, it’s either a new kid or, according to the Wiki, “Squid comes from the term “squirrelly” and was given to new riders who exhibited an unpredictable and unsteady riding style on account of them being new to the sport.” Given that Twister was the last Squid and he seems perfectly fine in his athletic skills, I’d say this is a mixture of that along with just being someone that the whole group rags on.

Outside of one fairly funny scene with the kids’ crotchety neighbor, Mr. Stimpleton, the episode is….not all that entertaining. They don’t make many jokes, what they do have for comedy isn’t funny, and there isn’t that much in regards to extreme sports either. They focus more on the street hockey match, which is short and not much happens in it anyway. Sam shines for a bit in practice, whacking away any and all pucks that come his way, and then he gets the puck out of Merv’s mailbox through his engineering skills.

On second look, this episode might be setting the foundation for the audience. Most kids, even in the 90s and early 00s, weren’t nearly as much into extreme sports and stuff like Otto, Reggie and Twister. Whether it was due to safety issues, overbearing parents, lack of access to places to practice these things or lack of funds to get the equipment, most kids would be into skateboarding a bit, maybe street hockey, rollerblading, but some of the later stuff they do is beyond the reach of most kids.

Plus, there’s the same issue Sam has in that a lot of kids just don’t think they belong in that world. That doesn’t change the fact that it looks awesome and seems incredibly fun, however. Introducing Sam off the bat allows the audience to connect better with one of the characters and helps them believe that they could have talent in some of these sports – they just haven’t found it. I know this show inspired me to buy a skateboard….that I was never able to ride without wiping out and hurting myself. I did get okay at rollerblading, though, and it spurred me into being a fan of hockey so I have that.

It’s a decent starter episode, but the entertainment value both in comedy and sports is fairly low. I also have a few nitpicks. 1) Sam was scared to death of the puck earlier, yet a rogue flying puck he knocks away with his bare hand without even flinching or thinking about it? Then he’s perfectly fine facing a full-on barrage of pucks flying at him at practice? Uh huh. 2) They didn’t bring any extra pucks? 3) Merv wasn’t angry that Sam was screwing with so much stuff in his house to get the puck out of his mailbox?

The second half of the episode, Down the Drain, has Reggie being left in charge of Mr. Stimpleton’s house while he and Violet (Mrs. Stimpleton) are away on vacation. Why he trusted a kid, even Reggie, to housesit when he seems to vehemently hate children is beyond me, but we need a plot. Otto, Reggie, Twister and Sam are allowed to use his super cool high-tech pool while he’s away, but he has a strict list of rules for the place that they obviously don’t obey.

They enjoy the pool for a while, but keep making fun of Sam for being reluctant to enter the ‘cold’ pool, even though Stimpleton said right before he left that he keeps the water at a nice warm 68 degrees. Sam threatens to drain the pool if they keep it up, and Otto and Twister love the idea. Reggie, not so much. They want to drain the pool so they can make a skateboard pool out of it. I don’t know why they’d bother seeing as how they live a sneeze away from a full skate park, complete with a huge skateboard pool, but whatever.

Sam: “What could possibly go wrong?”

Obviously, things go wrong. Twister leaves the drain hose next to a drain, but the water pressure from the draining process forces itself into the Rocket’s basement, flooding the place and ruining all of their stuff. Which, when you think about it in hindsight, must be especially horrible because Otto and Reggie’s mom has long since passed away and I can only imagine how much of her memorabilia is down there.

This episode also introduces us to Raymundo, Otto and Reggie’s father. He comes home early to use Stimpleton’s pool because he kinda has to per sitcom plot rules. It also briefly debuts Tito – Raymundo’s best friend and somewhat mentor to the kids.

They manage to keep the basement trouble and the pool drain a secret from their dad, but Stimpleton suddenly returns. He yells at Raymundo and they both yell for Reggie, but the kids all manage to escape.

This episode was more entertaining than the first part, even though, again, Stimpleton’s house is somehow all controlled remotely – even his electric toothbrushes…?? In the first part, this made a little sense because Mr. Stimpleton had troubles with wiring and seemingly does automate his house. However, Sam was using a big remote in that part. Here, he’s somehow controlling everything from the pool CPU. Why the hell would you want it that way?

Also, this huge hunk of metal he has to control such minor things as his pool was either super ridiculous even back then or technology has advanced a hell of a lot more than I remember.

This episode also debuts one thing I always hated about Rocket Power, and still do – the weird word emphasis cards. Every now and then, when someone says a word that may or may not be particularly emphasized, a colorful title card with various animations and fonts will pop up to put even more emphasis on it. I always thought that was an incredibly lame aspect of the show, yet they kept it the entire series run.

Down the Drain was more entertaining and funnier than New Squid on the Block, but it’s still not incredibly entertaining. It’s predictable, lots of things don’t have to happen but are forced to happen because plot, but Raymundo and Tito are my favorite characters, and it’s a strong enough story I guess.