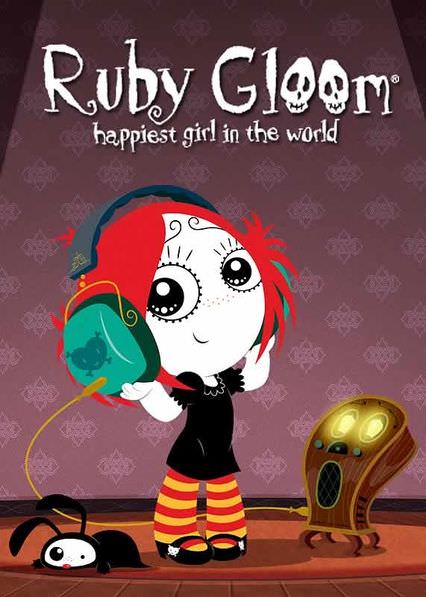 Plot: In a world of Gothic scenery filled with various monsters and creatures, Ruby Gloom is, oddly, never gloomy. She’s always looking on the bright side and can find happiness in anything.

I wanted this show to be so much better than it was. It has a lot of potential, but a lot of problems.

The show is based on a line of stationary and other school products that had the character and Gothic designs emblazoned on them. While they were initially aimed towards goth teens and tweens, the franchise eventually switched gears towards younger children….and it shows in the cartoon.

The writing is what really throws me. The dialogue and a lot of the throwaway gags work really well – it’s the story that’s obviously dumbed down to hell for kids. Let me ask you what is the laziest and obvious of ‘sitcom’ plots. If you answered ‘an easily cleared up in real life but causes ridiculous amounts of problems in sitcoms because no one communicates like human beings “MISUNDERSTANDING”’ You’d be someone who knows what a sitcom is.

Ruby starts out the story writing in her diary about a surprise May Day party she’s planning for her friends. The entry starts with ‘Dear diary, sometimes it’s okay to keep a secret from your friends, especially if that secret is a surprise party!’ She “hides” the diary in a super secret spot….on a small bookshelf in the living room….No one….would ever…suspect.

Iris, a cyclops, comes in saying she wants some adventures. And, boy howdy, a great place to find adventures is in books! Which are held in bookshelves! Diaries are books! On bookshelves!

She directs Iris to her bookshelf and leaves to prepare stuff for the party. Iris finds the diary and reads it. She justifies it by literally saying……you only live once…….I thought we were done YOLOing ourselves into stupidity. She opens it to today’s entry and reads “Dear diary, sometimes it’s okay to keep a secret from your friends….” then she stops, freaking out that Ruby’s keeping a secret from them, and runs off to panic their other friends.

When Iris goes to talk to Misery, their miserable friend who is always experiencing some misfortune, they see Ruby carrying a big box and instantly conclude that she’s moving out of the house (They’re all roommates in a big Gothic mansion.) In an effort to keep her around, Iris, Misery, Skull Boy (a skeleton) and Frank and Len, conjoined brothers who are kinda air-headed rockers, decide to pester Ruby the whole day while doing things they assume she wants them to do.

Ruby is frustrated by the lack of privacy since that’s definitely not conducive to planning a surprise party, but instead of asking her friends what’s wrong with them, she consults…a psychologist who’s also a crow? He keeps smacking a bee for some reason. His name is Poe, and he has two brothers named Edgar and Allan. (Get it?)

Ruby decides to investigate for herself. She retraces her steps, prompting her to open her diary back up. She sees that it was left ‘open’ to the following day, which is odd because she never does that. However, the book was back in the book shelf…meaning it was closed….and not open to any day. She finds a bunch of cookie crumbs in the diary because not only is Iris a privacy invading weasel, but she’s also an inconsiderate bitch. Ruby knows the last time she saw Iris she was eating a cookie and deduces she read her diary and found out about the party.

She decides to use reverse psychology to make everyone believe that the ‘fun thing’ won’t happen unless everyone gives her some space…..Which…is it me or does that not make any sense? They believe the ‘fun thing’ she’s talking about is moving away, and they don’t want her to move away, so shouldn’t they not be giving her any space? These plots never work unless people are being unnecessarily vague in situations where they wouldn’t be otherwise.

Also, just as a bitchslap in the face to anyone in the audience with a lick of common sense, we get this exchange.

Ruby: “There just seems to be something else going on here.”

Poe: “Have you considered asking them?”

That is flatout – “Why doesn’t she just ask them?”

“Then we wouldn’t have a plot.”

She gets invitations out to everyone and decides to hide in the meeting spot to learn what’s really going on with them. Iris, Misery and Skull boy state that they believe Ruby is moving out, and Iris suggests that if she’s really set on it, they’ll hold a bon voyage party. She could’ve just come out of hiding and cleared everything up then, but we still have four minutes of runtime.

Ruby decides that wallowing in her friends’ misery (no…pun intended?) is a nice coverup for her party and even later calls it a ‘joke’. Because we still need padding, her friends don’t believe her when she reveals she was never intending on leaving and was planning a surprise party. Right, instantly believe wild accusations based on evidence so flimsy it couldn’t support an ant filled with helium, but Ruby outright telling you what her intentions are, well, she’s obviously lying.

Ruby, giving up on trying to convince them otherwise, claims she was indeed thinking of leaving, but realized that they’re such great people, so she decided to stay….and that works. Cut to dance montage.

Also, Frank and Len, for some reason, believe Ruby was dying this whole time and just talk about the five stages of grief before holding a private memorial service for her. I dunno.

I really feel like this series needed to be somewhere between this age level and Invader Zim age level. The fact that this is for younger children and is obviously written in such a ‘kids are stupid’ manner hurts it so much. It’s such a waste because, like I stated, the dialogue, timing and jokes are there – it’s the story that blows.

If this is meant for younger audiences, what’s the moral here? Don’t read other peoples’ diaries because it will cause shenanigans? Find better hiding places for your diary and don’t outwardly direct people towards it? Never talk in a vague manner?

As a first episode, it works alright. It introduces us to the world and characters fairly well. We learn what a good chunk of the characters are like without them needing to shove exposition in our faces. Ruby doesn’t really come off as a character who is always happy and looking on the bright side, though, because she spends a good chunk of this episode confused, irritated and suspicious. She has a good personality, but I don’t think she’s quite at the level of being always happy.

Finally, the music is awesome. That opening theme is one of the catchiest theme songs I’ve heard on a show in a long time.

I wrestled with this verdict for quite a while because the story for this episode was just so badly written, but the jokes and dialogue worked so well that I think and very well hope there’s stronger entries here. It has everything it needs, but maybe we just got off on the wrong foot in the story department. This series got three seasons and won a few awards, so I assume there must be something better there.

Extra Notes: She has a cat named Doom Kitty. If I ever get another cat, I’m naming it that.