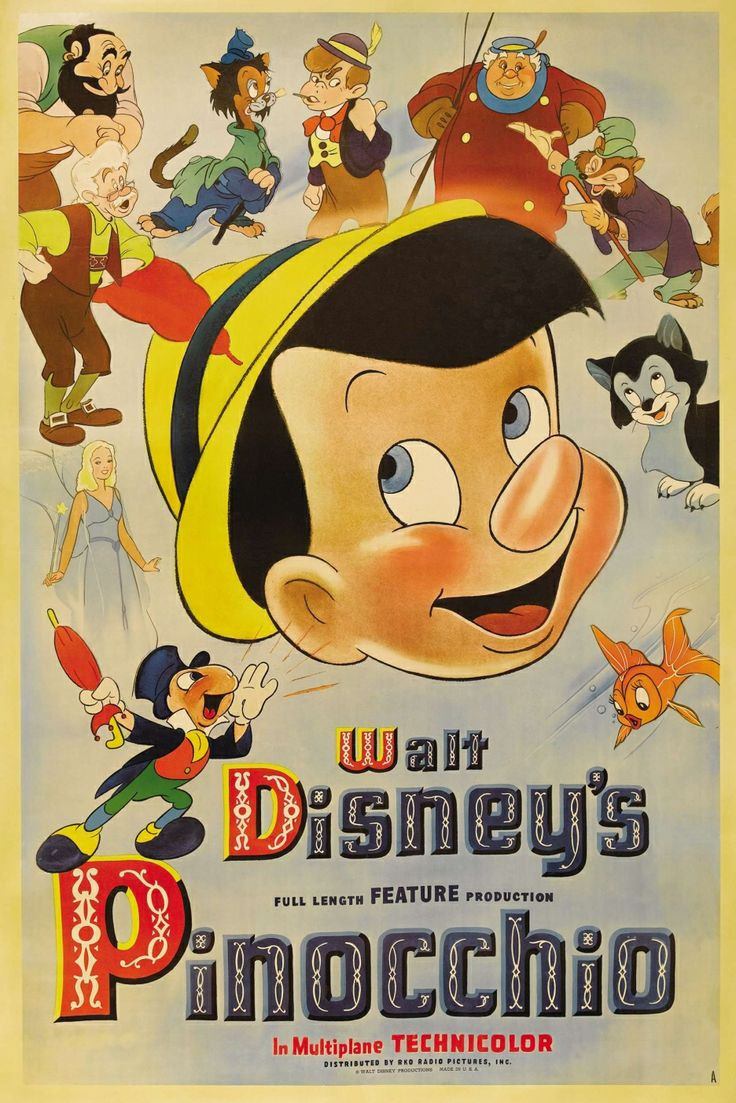 Plot: A toymaker named Geppetto made a marionette named Pinocchio. Despite his awesome ‘stache, he couldn’t find a woman to mate with him and make him a child, so he wished Pinocchio was a real boy. His wish is granted by a fairy because fairies just do that, but she only brings the puppet to life. In order to become a real boy, Pinocchio has to prove himself to be a kind and moral young lad. However, he doesn’t know the difference between right and wrong so a kindly cricket named Jiminy gets assigned to be his conscience. Then a bunch of weird stuff happens.

Breakdown: While Pinocchio isn’t the closest nostalgic Disney feature in my heart, I do look back on it it fondly, and I remember getting the VHS for the movie way back when I was a wee lass. And, wow, unlike Snow White, I just could not refrain from nitpicking and seeing this movie with a more adult view.

Don’t get me wrong, I still really like this movie, and, man, I do loves me some of that painted Disney magic, but I was just picking apart the story and then realizing that the second half is one trippy confusing little ride. Not mention how many times I had to stop myself from thinking a scene was pedo-y….

Some things I can’t nitpick too much. I was going to say it’s dumb to send Pinocchio off to school when he’s only been a sentient pile of wood for less than 12 hours, but then I remembered that they seem to live in a weird world of anthropomorphic foxes and cats (even in a world with pet cats. It’s Pluto and Goofy all over again) so that’s not really an issue anymore. And seeing as how Pinocchio’s existence is also completely brushed off by fellow kids, I guess a puppet coming to life is just another day in Italy.

To get to the actual issues though, I’m confused about the fairy’s logic. She specifically says Geppetto deserves a son, but she doesn’t fully bring Pinocchio to life and instead makes him go through a trial of being a good person before he can actually be human. That’s okay I suppose, but then there’s the fact that he has no sense of what’s right or wrong, and he’s naïve as all hell. So Jiminy is assigned to being his conscience, but dammit all if he doesn’t suck at it. He doesn’t really give any advice on what’s right or wrong to Pinocchio ever. He just points out that one person is bad without reason once.

Geppetto’s no help either because he doesn’t try to teach Pinocchio anything. He just answers every question with ‘because’ and sends the poor boy off to school not preparing him for how the kids may react or how anything in life works – like stranger danger.

Pinocchio gets into trouble because he really doesn’t know any better and then starts lying to the fairy for no real reason. The Pinocchio in this version has been shown as a very kindhearted yet extremely naïve individual, yet he somehow not only knows how lying works but he does it very naturally and without any actual prompt. Did he think the fairy would get mad if she heard about him getting kidnapped? Because that’s Jiminy’s fault, if anything.

I would say that’s a message of saying that, no matter what your conscience is telling you, it’s up to you to listen or not, which is also fine, but then I have to remember that Pinocchio has no real knowledge of anything in the world at all. Hell, he was setting himself on fire the night before because he liked how pretty the fire was.

He then gets caught by the same people without Jiminy even realizing it. You’d think he’d learn after that to keep a closer eye on the kid but no, and he gets tricked into going to ‘Pleasure Island’….see what I meant about the pedo-y stuff?

Here’s where Pinocchio pulls a complete 180 in character. I could brush off the whole thing about getting kidnapped and going off to join the marionette guy from before because he didn’t really know any better. But when he gets to Pleasure Island, he full on says that he likes being bad, so it seems that even without Jiminy he realizes that what he’s doing is wrong and is going ahead with it for whatever reason.

Oh yeah, let’s address the creepy and downright dark and confusing aspect of Pleasure Island. So a man kidnaps BOATLOADS of misbehaved boys who skip school and do no good. How no one in town has noticed that many kids going missing is beyond me. But considering that they all must be rotten boys, that must be a really awful part of town. Also, I love how it’s only misbehaved boys who are taken. All girls are innocent angels free of sin. ❤

Pleasure Island is a theme park, and I do not understand said theme park. You already kidnapped the kids – why the theme park? Just stick them in a cage or something. And wouldn’t that theme park, that inevitably gets destroyed each time the kids come, cost way more in construction, maintenance, operation and repairs than whatever you get for the kids? And this theme park is specifically designed for little brats since it has robot Indians chucking out cigars to the kids (Aw look, it’s Disney being racially insensitive to Native Americans before Pocahontas. Awww they were so precious.) kegs, and model houses specifically for the kids to destroy.

That’s not even the most baffling part about this theme park. It’s all just a front for a secret operation to turn the kids into donkeys.

I mean, what? How did we go from an innocent story about a puppet coming to life by a fairy and having a bug being his conscience in hopes of someday becoming human to kids being turned into donkeys? I mean, come on Disney. Suspension of disbelief! Pft.

But yeah, the beer and the cigars were poisoned with….something, I dunno, that turned all of the boys into donkeys who would eventually be sold off to salt mines and farms to work until they die. Unless they were young enough to apparently retain their ability to talk because….I honestly have no clue what happened to those boys. Probably kept as a show attraction until they were too old to speak anymore and then sold off into child/donkey labor.

Not one of them were saved. Yeah, screw your happily ever after. Those little brats were never found and were probably forced to work to death. Kinda dark, there, Disney.

Lampwick might have escaped, but I don’t see how.

While this is trippy, dark and confusing, them repeating the stuff about being jackasses (and, yes, they actually say ‘jackass’) basically implies that this scene means if you’re a little brat as a kid, you’re damned to turn into a jackass for the rest of your life….I guess.

Then we get to the weirder stuff. Half-Donkey Pinocchio runs home to find that Geppetto is not there, and I can’t understand how long Pinocchio’s been gone. Last we see of Geppetto, it was the same day Pinocchio was supposed to go to school and he kept looking for him all over town. His first kidnapping took place over the course of a day before he tried to get home again, but I guess the second one took place over days, weeks or possibly months.

Geppetto’s gone, and a glowing bird sends down a message to Pinocchio and Jiminy that Geppetto has been swallowed by a whale.

Apparently, Geppetto was out on his fishing boat when he got swallowed up. This is what confuses me about the timeline. They’re starving to death, act like they’ve been on that boat for quite some time and have little hope they’ll (they being Geppetto, Figaro and Cleo) survive in the next few days. But what was he even doing out on that boat? Like I said, last time we saw him he was looking for Pinocchio after he had gone missing after leaving for school. What was he doing on the boat then? Did he think he’d find Pinocchio out on the ocean? Or had he been missing for so long that he decided to go fishing to clear his mind over the loss of his puppet child?

Also, how could both Pinocchio and Jiminy breathe underwater? The prospect of drowning doesn’t even come up until they exit the whale. I would say this is because Pinocchio’s a puppet, but he seems to have regular bodily functions like in his reactions to the cigars. And his ‘death’ later can only be explained as drowning.

There’s also that thing about making a whale sneeze by setting a fire in its stomach which I don’t even sense make.

Bottom Line: I have no idea why I was able to completely immerse myself in Snow White and just gloss over every seeming issue yet I was practically hung up on them in Pinocchio. This just got to be more trippy and dark than I remembered….and confusing. But for the most part the movie does have good morals, decent characters and I can’t think of a point where I wasn’t really enjoying myself.

Recommended Audience: Well, the word ‘Jackass’ is said a few times, but I always thought it was stingy to say that’s a swear. It’s in the bible for crying out loud. Kids smoke and drink beer, but the message is obviously that those things are bad to do….and will turn you into a jackass. Plus there’s the downright frightening aspect of that whole Pleasure Island thing. But other than that, it’s perfectly fine. 5+