Wow, the challenge is over already? Time flies when you’re salty, apparently.

I really enjoyed this challenge, and it was a nice changeup from the regular challenges. As someone who appreciates a good rant, this challenge gave me all sorts of opportunities to get some stuff off of my chest and have some fun slamming old anime adversaries.

Oddly, it even got me to appreciate some shows and characters more. The discussions I’ve had during these 23 days have given me some great new perspectives, and I think my bond with the anime community has gotten even stronger. We may not agree with everything, but not a single person gave me any sort of flak for my opinions. The mutual respect is so refreshing and greatly appreciated.

Plus, I’ve been really enjoying the responses from FuelS and Jiraiyan. Check out their challenges, if you haven’t already, and thanks to FuelS for making this challenge!

If there’s one thing I’m salty about…..it’s YOU.

Yes, you, reader! I got some salt to…pick with you! Why haven’t YOU been doing this challenge?!

Are you a chicken!?

Are you a fraidy cat?

Are you watching your sodium intake?

Do The Salty Anime Challenge! If you do, share your responses with me! I’d love to read them, non-wuss!

I really struggled with this one. Outside of the typical ‘kids’ shows like shounen gaming anime, I don’t really know of many shows that I like that others hate on or that have particularly bad scores. Two shows came to mind, though, one of which is an aforementioned shounen gaming anime, but it’s for a different reason than the usual.

If you’ve followed me for the past few Halloweens, you probably know that I’m a Yami Shibai: Japanese Ghost Stories fan. 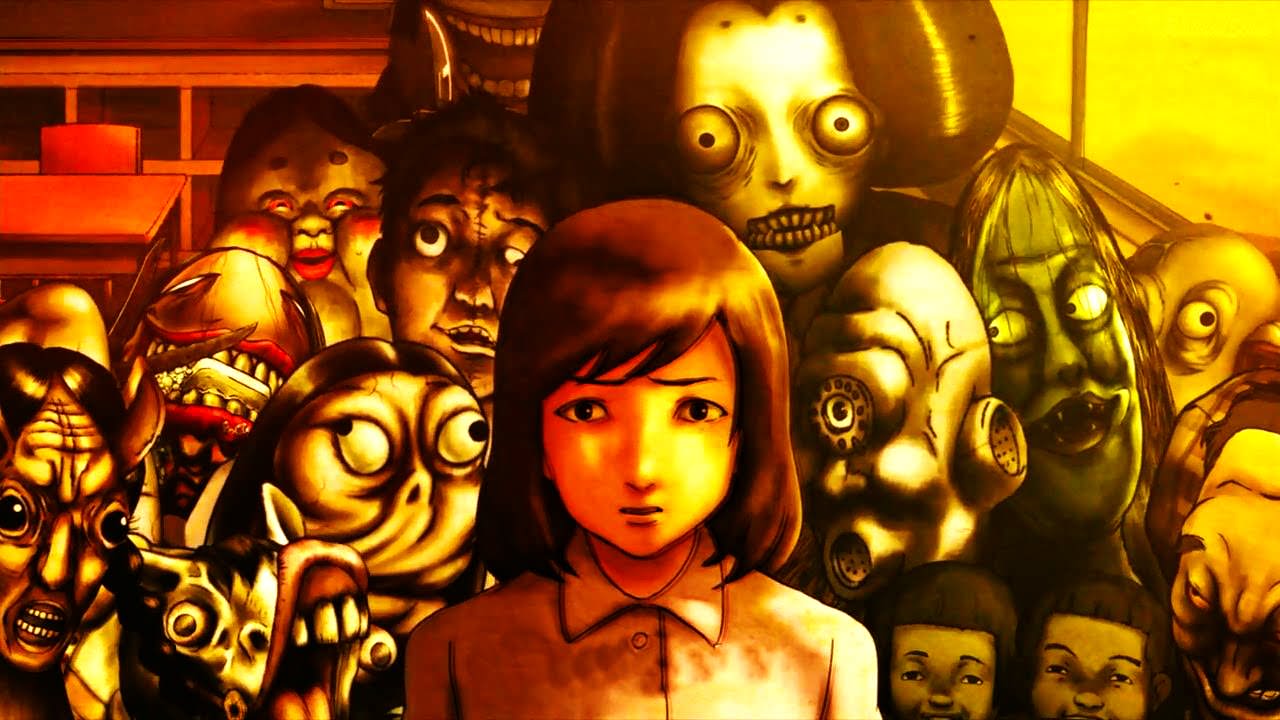 For those who have never seen it, Yami Shibai is a horror anthology series presented as a kamishibai show. I absolutely adore horror anthologies and the style of this show really appealed to me. The stories vary widely in quality in nearly every way from story to characters to art style (especially in later seasons) but, as a whole, I love the entirety of the franchise, and I’m excited about Yami Shibai 6 coming out this July.

However, the series receives a lot of flak, and it seems to get worse every season. The first season was held in pretty high regard, but every subsequent season keeps getting worse and worse responses.

The scores for the various series aren’t really that low. They range between 7.5 and 5.5.

Even so, the discussions I saw about these series on various anime sites were just terrible. It seems like they get the worst of it right when it’s in the middle of airing, but it gets pretty badly slammed. They either say the story was stupid or it’s just not scary at all, and the one comment that never goes away is ‘This series hasn’t been good/scary since the first season.’

I will admit, Yami Shibai has some major duds in their collection. Every anthology is bound to have at least a few stinkers, and the seasons aren’t terribly consistent with quality. People were pretty relentless about this series, though.

The aforementioned shounen gaming anime I chose was Duel Masters.

I loved Duel Masters for the handful of months they showed it on TV. It was a pretty funny show with a cool card game being the focus. I even bought some of the cards and the GBA game for it. I had a blast playing it.

Like all shounen gaming anime, it shares many of the same criticisms like being poorly animated, having a bad story, having stereotypical leads and, of course, it carries the pall all shounen gaming anime carry – it’s just a half hour long commercial. It’s a show designed to sell toys. If it’s just those things, why does Duel Masters tend to get the pointy end of the review stick?

Thing is, Duel Masters couldn’t have come at a worse time. It debuted right at Yugioh’s peak, so it obviously gained a firm reputation as being a Yugioh ripoff, even if, besides playing card games being part of the plot, it had nothing to do with it…..Mostly.

People pretty much wrote off the show before they ever even saw it, if they ever saw it at all. It’s understandable, I suppose. But I think it’s undeserved.

One thing you have to know about Duel Masters is, from everything I’ve been able to gather, the dubbed version is almost entirely a different show in regards to dialogue and tone than the original. I doubt many people who have watched the dub have seen the original, but I feel the need to speak its piece in that department.

The dub tends to focus a lot on comedy. They break the fourth wall all the time, have meta humor and constantly make jokes. They even change up the editing in order to include more jokes. There’s still a ton of shounen children’s-card-gaming action, but there’s much more comedy to the dub than the original.

The original version, which I’ve never been able to find, supposedly plays all of this straight, and from what I’ve read of the plot and story of the original manga and what I saw of the dialogue in the game, I’m obliged to believe this is true.

The story, from what I can tell, doesn’t change all that much, it’s just that the dialogue, tone and editing are mostly altered to make jokes.

I will admit, I don’t remember much of the story besides these are kids who like playing Duel Masters, they enter a tournament and, of course, there are a bunch of evil people who play the game that they have to defeat because, if not, they’ll, say it with me now, take over the world!

The original does appear to be a Yugioh rip-off, to the bare bones anyway. I have yet to see any Egyptian imagery or Kaiba clones. At the very least, they’re trying to ride its coattails. However, I don’t believe the dub should share the original version’s negative marks on copycatting because 1) The game itself is a lot different from Yugioh. Not every card game involving monsters is a Yugioh rip-off, guys. 2) The dub’s really funny sometimes. Even if the story falls flat, they did enough with the dialogue in the dub to make it very entertaining.

Even today, Duel Masters maintains its horrible rep. If anything, it’s gotten worse. Reviews of the show aren’t plentiful, but what’s there is usually extremely negative. Check out this gem for example.

I particularly enjoy this section.

There is a nerdy bunch of kids who care more about a card game, than, let’s say, finding a job or getting laid, and a bunch of costumed weirdos who control the world with cards.” Yes, ten-year-old children, go out and get a job and get laid instead of playing that children’s card game.

I will give them some leeway because they call it a Magic the Gathering rip-off instead of a Yugioh one, which is more accurate. Yeah the tapping and mana thing carry over, but MtG is far more complex and Duel Masters still does enough to differentiate itself.

I don’t even think the ‘action’ is bad. Generic? Yeah. Poorly animated? Indeed. But I have plenty of fun with it.

When they keep the serious tones, it’s actually somewhat funnier because you can clearly tell the voice actors aren’t taking the serious stuff….seriously. It’s almost like they’re purposely either phoning it in ultra hard or overacting to the max just to make the serious stuff look silly.

Maybe a part of it is my nostalgia goggles. Maybe I’m mentally filtering things. But I rewatched some clips of the show to do this entry, and I still think it stands up perfectly fine…..I did not remember the insanely poor sound production, though. I don’t know what happened in the BGM and sound effect department, but it’s sloppy as hell. I won’t defend that.

And now for your earworm pleasure, the theme song!