Oh the possibilities with this one. Since it’s just -dere and there’s around a billion -dere types, I decided to split this into two entries: One for tsundere and another for yandere. 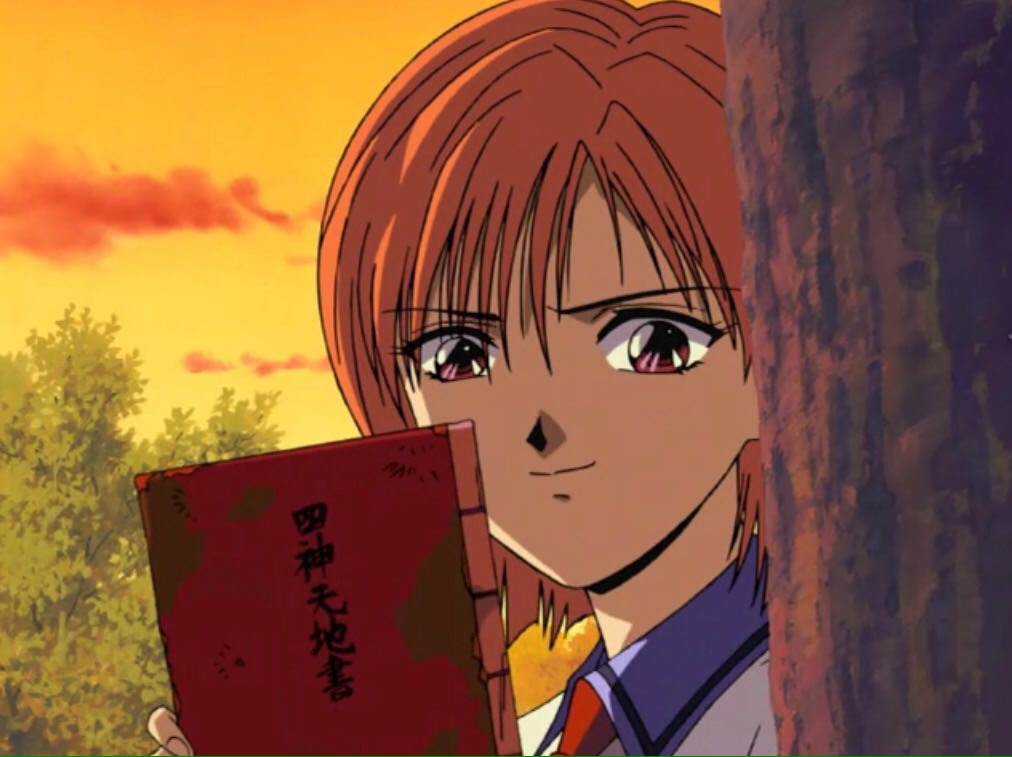 I forgot about her.

I wish I still forgot about her.

For today’s entry, I wanted to be accurate, so I looked up a list of tsun and yanderes on TV Tropes and lookee who I found! One of the world’s biggest irredeemable bitches in animation.

Fushigi Yuugi Eikoden is animated fanfiction. That is not a lie.

Mayo is a whiny little brat who devolves into a massive, malicious, malignant tumor of a person. She starts off the series whining about nearly everything in her life, treats everyone who cares about her like garbage and believes she’s entitled to Taka, the reincarnation of Tamahome and now husband of Miaka, because she had a crush on him for three years.

She hates Miaka because they got together, and she uses the book of the Universe of the Four Gods to become the new priestess of Suzaku, grant her wish of forcing Taka into loving her, magically steals Miaka’s baby from her womb, causes Miaka to go into a coma and doesn’t give a crap about her life, gives zero shits about the danger within the book because the Suzaku Seven protect the priestess and she gives even fewer shits about their lives, sans Taka, threatens to kill Miaka and Taka’s unborn child if Taka doesn’t love her and do what she says—I cannot go through the entirety of all the bullshit she pulls over the course of the four episodes of the OVA.

All that was from ONE EPISODE.

See here for a complete collection of Mayo’s Horribitch moments. Be warned, though – this review is old so the writing’s kinda iffy. Facts are facts, though.

Let me just say….While Yuka from 11Eyes is indeed terrible, Mayo’s on a different level. I can’t believe I forgot Mayo this whole time. I must’ve been subconsciously blocking her from my memory to avoid having a massive rage-induced coronary.

Well, near the end, she pulls a 180 and acts all damaged and sweet and apologetic. And, even though she did some incredibly terrible, horrible, evil things, the other characters all up and forgive her without a thought or a doubt. She’s completely redeemed, ends up helping Miaka save the day and becomes besties with everyone. 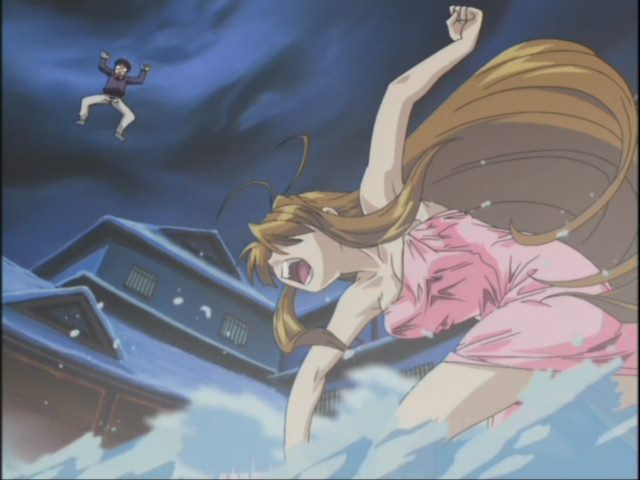 Ah, Love Hina – one of the most well-known and treasured harem romcom anime. Love Hina was surprisingly popular back in the early 2000s, and it was one of those shows that was everywhere, but moreso in the AMV community. It was always a part of collabs somehow, and nearly every love song, comedy or otherwise, has been put to it.

Why am I putting Naru on this entry if I’ve never seen Love Hina? She’s the reason I’ve never watched Love Hina.

I was a part of the AMV scene back in its glory days. I made ‘em, I watched ‘em a lot – it was a fun expression of the fandom. Because of this, I saw a lot of Love Hina clips and learned the basic gist of the series.

The basic gist is that Naru hits Keitaro a lot, usually for no reason. But they’re totally in love and junk.

This series is basically famous for how much Naru hits Keitaro. She’s an OG tsundere.

A clip from AMV Hell 7 sums it up quite nicely. Naru and the others are questioning Shinobu (a young, shy girl) about something. She cries just because they’re insinuating that she might maybe know something about it. Naru, out of friggin’ nowhere, yells ‘Keitaro, this is all your fault!’ and punches him, sending him flying nearly off the porch. Then Keitaro says ‘What did I do!?’ and this sound clip plays.

Seriously, what the hell is her problem? Everything I read about her makes me not want to watch this series even more.

Here are some other stupid highlights brought to you by TV Tropes.

– Once she walks in on Keitaro changing and she punches him anyway! Naru justifies herself saying it was “a reflex”.

– One time, she tries to hit Keitaro on the grounds that he must be thinking something perverted.

– Another time, Tama-chan the turtle has gone missing, and Naru and Keitaro are looking for it. Shinobu has just got home and is changing her clothes, when she is scared by Tama-chan and comes running up to them clad only in her camisole, grabbing Keitaro in panic. He’s too busy trying not to choke to notice her, yet Naru still hits him “just in case”.

– Once ridiculed Keitaro’s hopes of getting with his promise girl on the basis that he’s a spineless dork. Keitaro retaliated by saying that Naru could never get with her promise guy because she’s violent. Instead of realizing how mean she was being, Naru just bursts into tears, making Keitaro feel guilty for something she started.

I’m not sure how much -dere there even is to her. I’ve seen some ‘sweet’ clips of her and Keitaro, but according to what I’ve read, she’s rarely ever nice and stagnates in character development regarding accepting her feelings for Keitaro and refraining from being violent until the very end of the series. 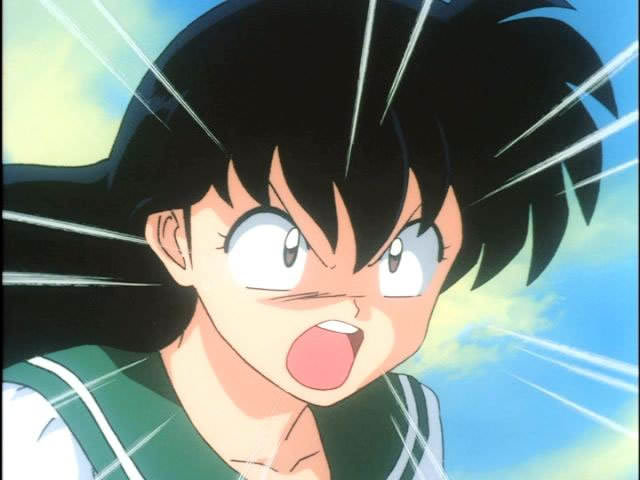 Kagome’s not a big tsundere. She’s usually nice, but it is insanely common for her and Inuyasha to get into shouting matches. Plus, there’s the staple of the series in her ‘SIT BOY!’ ability, which creates the physical abuse.

Admittedly, the SIT BOY thing is funnier than the average punches and kicks, considering he’s a dog demon and all, but she’s still slamming the guy into the ground for offenses that are frequently just him putting his foot in his mouth. It was originally meant to keep him in line in terms of stealing the jewel or doing particularly bad things – it wasn’t meant to punish him for not liking a part of the lunch she made for him.

I’ve always found Kagome to be very grating. She screeches a lot, she screams a lot, she’s always yelling Inuyasha’s name and getting into danger so Inuyasha can save her.

I’ve learned to give her more leeway because she’s a teenager girl thrust into a dangerous world. Sango was born and raised a demon slayer, that’s why she’s so badass, and Kikyo was similarly brought up to be a powerful priestess. But Kagome still had plenty of time to get more useful in battle or to become a more interesting character. She does get some moments where her bow and arrow save the day, but it’s almost all Inuyasha and the others.

For the most part, she’s defined by her relationship with Inuyasha. We never learn what she really wants to be in the future or what she likes outside of typical modern day amenities. The only thing she strives to be is a person who stays by Inuyasha’s side, and she becomes Inuyasha’s wife in the end, leaving the present day world behind her. I would ask how that doesn’t massively change the ‘present day’ or her existence, but Back to the Future Part III has taught me that that doesn’t matter.