This one kinda confused me because ‘sidekicks’ in anime typically refers to animals, but the fact that it includes ‘male/female’ makes me think it means human character, like best friends such as Krillin or Kuwabara (examples: I love those two) (Also, I’m aware animals have sexes. It’s just that you usually don’t bring up that differentiation when talking about animals, so I got confused.) Soooooo, I’m gonna do both!

I feel slightly guilty about this once since Plue, unlike a lot of animal sidekicks, actually serves battle purposes in both Rave Master and Fairy Tail – plus, he serves as a rave stone detector in Rave Master. However…..I friggin’ hate this thing. When he’s not being a tool of battle, Plue is a creepy, perpetually trembling little snowman….thinger who shrivels and has a weird manner of speech. He’s just overall unsettling to watch. I hate his face, I hate his ridiculous proportions (his neck should be all kinds of broken) I hate the way he eats, I hate his soulless black eyes – I hate him.

I was always annoyed by him years ago when I watched Rave Master, and I thought I was going crazy when he suddenly appeared in Fairy Tail years later. Why would this creepy little bastard warrant a cross-series revival? 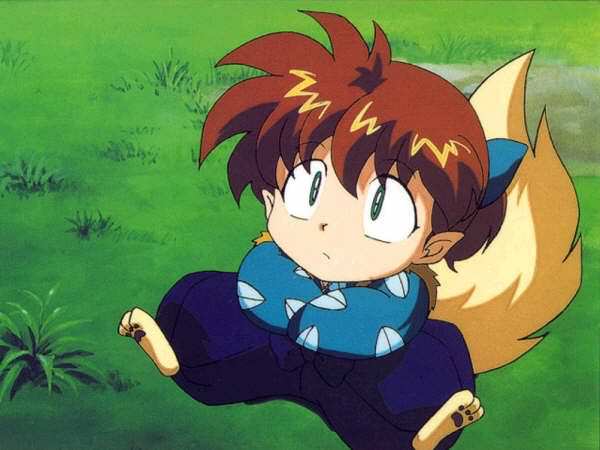 Shippo from Inuyasha. Not sure….where he would place because he’s like half animal half person. Shippo just annoys the hell out of me. He helps out in battle kinda, but his only real point in usefulness is transportation as a big balloon thing. He has what should be an incredibly useful transformation ability but they barely ever use it. Shippo is an annoying little brat who doesn’t really grow or develop at all over the series, even in The Final Act. 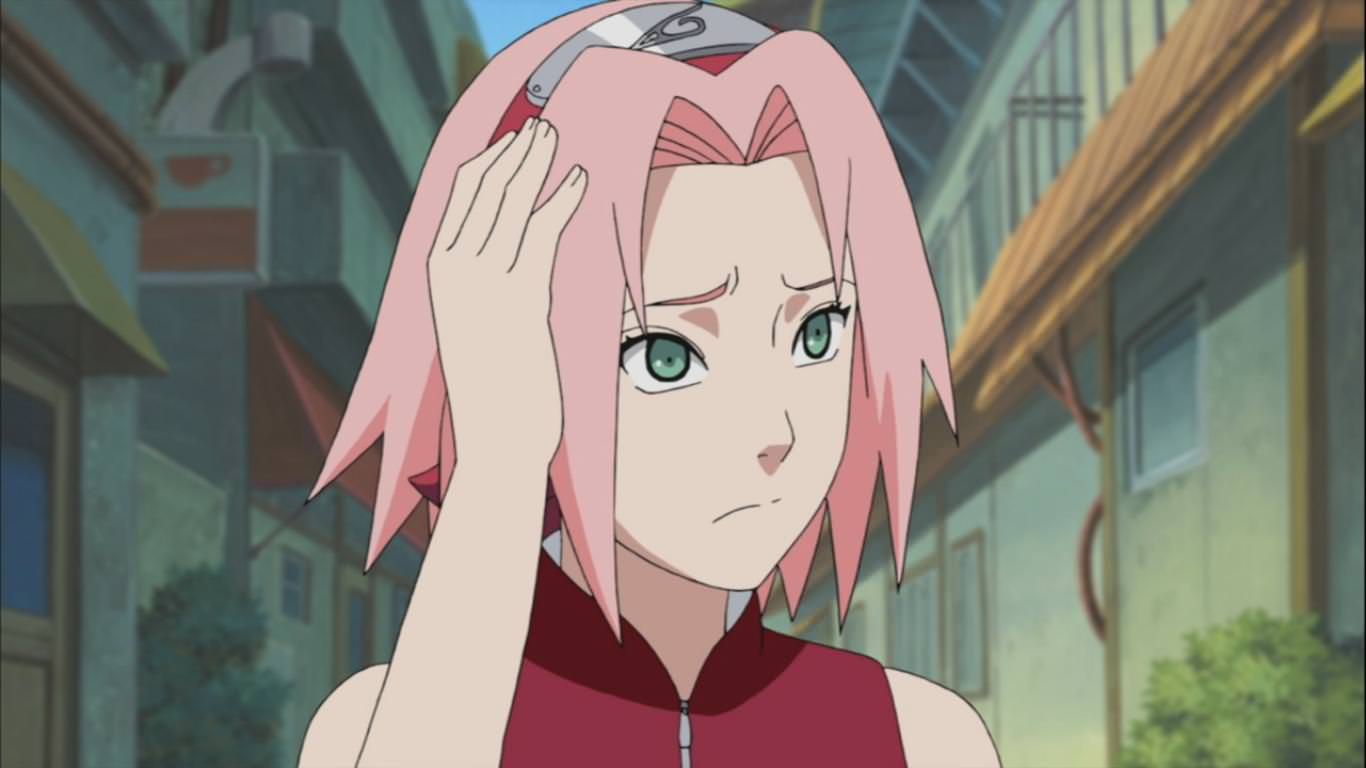 I am so original.

Note, I mean the first series. I know she gets more useful in Shippuden…..but she still doesn’t get….quite……useful enough.

Not to mention that all this time has gone by and I still have yet to hear her doing anything that would be deemed really awesome or impressive. She pulled off a really difficult medical procedure once or twice, and that’s all I heard. I’m trying to watch Naruto not House. But I’m not going to harp on her later versions because I’m not caught up nearly enough to give a strong rant there.

Let’s just focus on the original Sakura. She is obviously a very easy target, but I can’t help it. And, sure, you can argue she’s not a sidekick…..but she totally is. If Naruto and Sasuke are the main focuses, Sakura is a sidekick. She’s useless in nearly every battle situation and constantly gets saved by one or the other.

Sakura’s character is based fully on her crush of Sasuke – a crush that should’ve died out as time went on, but dammit she is the most determined fangirl ever. I was astounded when I heard they actually got married – and trust me that’s a rant for another day. She is obsessed with him, but he doesn’t return her feelings at all. She loves him, but she doesn’t really know him. All she knows is that he’s cool and hot and says angsty things, which are totally dreamy.

She grew out her hair long for him since she heard from the grapevine that he likes girls with long hair, and she broke ties with her best friend for several years because they got into a fight over him (and that rivalry really only fizzled out completely once Ino got with Sasuke stand-In, Sai. Between that and Ino later become a medical-nin too, I can see why she’s gained a reputation as living off of Sakura’s scraps)

But like any interesting and well-written character, she has a sad backstory. Her ‘sad backstory’ is that she was picked on for having a big forehead…..and it’s not even noticeably large. Aw, why don’t you go tell Sasuke that sob story as he mourns over the mass Uchiha grave? Or maybe you can tell orphan Naruto about it while he’s being treated like a literal monster by everyone in the village for something he can’t control, doesn’t understand and doesn’t even know about.

Speaking of Naruto, she treats him very poorly. Everyone treats Naruto like crap, and he can be very annoying, especially in the first series, but when one of the first lines you hear out of a character’s mouth is a completely unwarranted ‘And I hate Naruto!’ when the poor kid is just sitting there, it’s hard not to instantly dislike her.

She’s always putting him down and punching him in the face and treating him like dirt. Sometimes, he deserves it, but it’s frequently unprompted and unwarranted.

Sakura’s main talents are in her chakra control, which isn’t useful for anything worth a crap in this series (for her anyway) and only benefit her in Shippuden and Boruto, and…..she’s….smart. I guess. That’s about it.

While everyone else, even flash in the pan characters, usually get a shining moment of badassery, Sakura gets two moments of ‘wow, are you kidding? That’s supposed to be badass?’

The first is when she is captured by the enemy. One of them has her by the hair. They don’t think about restraining her arms because why bother? This is Sakura. But then, in a shining moment of implied badassery, she grabs a kunai and cuts her hair….yup. That’s it. She cuts her hair.

Look, I get what this moment is really about, okay? As mentioned before, she grew her hair long because she heard Sasuke likes girls with long hair. This moment is supposed to not only be a show of her trying desperately to be useful (that is one of the points of this whole scene since she’s tired of Sasuke, Naruto and even Rock Lee coming to her rescue) but it’s also about her proving that she’s not just a Sasuke obsessed fangirl and that she’s a strong konoichi and blah blah….because hair doesn’t grow back, right? You’re not Guts, Sakura. You didn’t lop off an arm.

This moment doesn’t even have that weight to it because Sakura probably realizes at this juncture that the long hair thing was a stupid rumor because Sasuke has no interest in romance or attraction. He’s dead set on revenge.

Then there was her second moment of implied badassery in her ‘epic’ fight with Ino which was by far the most boring match of the whole chunin exam tournament.

They gave her nothing to do and nothing to be in the original series. I’ll definitely say she matured as the series went on as she’s not as much of a Sasuke fangirl by the end, but it’s just not enough by a long shot.

PRE-POST EDIT: I’ve been doing some entries backlogged, and after writing this entry, I found Fueled By Smiling’s entry and apparently this one was supposed to be Least Favorite Male Character, Female Character and Sidekick Character, not different versions of sidekicks…..So….I dun goofed….

I think I covered that here, though, for the most part, and this entry is pretty long, so I’ll just chuck a short blip for male characters. Add Hercule from DBZ and Touya from White Album.

I hate people who take credit for something other people have done, and Hercule takes all of the credit for the Z fighters’ accomplishments. He’s a massive coward with a massive ego, and that combination easily pushes my anger button. At least he tamed Buu and is kinda nice, but I can’t get beyond the glory theft aspect.

Touya’s basically Makoto from School days, but he arguably does worse. Arguably. They’re neck and neck. At the very least, Makoto dies. Touya ends up with a happy ending…. See here for full details.