Skip to content
HomeThe Salty Anime Challenge Day 5: What is Something That You Would Change in Your Least Favourite Anime That Would Make You Like It?

Come on, have some mercy. I chose Eiken for this. EIKEN. I could write a college thesis for this entry.

The main thing that I really think would’ve helped Eiken be better is I wish Eiken had been more self-aware and had been more of a parody of ecchi instead of being one of the worst examples of it. It seems like it’s trying to go there sometimes because the jokes are just so obvious and in your face that you think it has to be a parody, but it’s not. They’re just lazy and making the stupidest and most obvious jokes they can.

They had the foundation for a parody right in the premise. Those ginormous boobs could’ve been a parody in themselves, but nope. They’re just used as really poorly made fanservice.

Truth be told, I can’t even understand how the people with a massive boob fetish get into this. The overall art and animation are terrible (manga included) and the colors are so ugly it’s like someone’s jamming randomly selected crayons into my eye sockets.

Look at these uniforms. 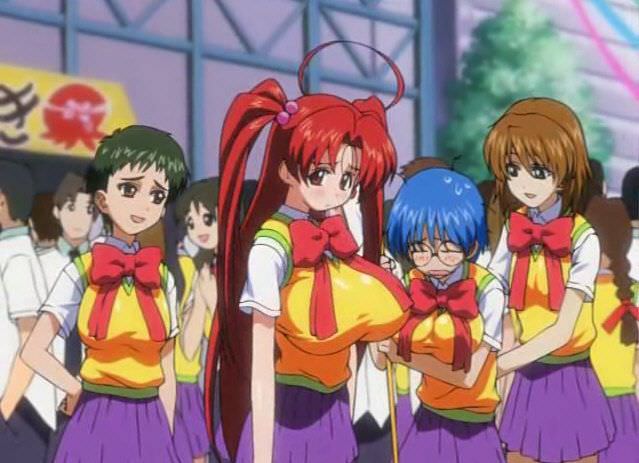 Yellow. Lime Green. Red. And Purple. What are the bows even about? They look so awkwardly placed.

I’m going to stop myself now because I’m going off into another Eiken tangent. I just don’t understand anything about this show’s existence.

10 thoughts on “The Salty Anime Challenge Day 5: What is Something That You Would Change in Your Least Favourite Anime That Would Make You Like It?”