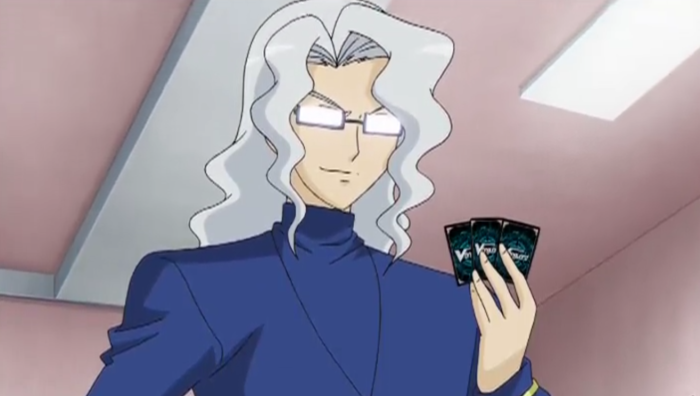 Plot: The Card Capital Tournament is drawing closer, and Aichi struggles with the decision to enter or not. He feels as though his shouldn’t until he learns Kai is entering. Eager to face him again, Aichi tries to take the last spot, only to have another player named Kishida muscle in at the last second. In order to settle the dispute, Shin suggests having a Cardfight for the final spot. Can Aichi utilize everything he’s learned so far to earn the final spot, or will he spend his first tournament watching from the sidelines?

Breakdown: Have you ever wanted to fuse Weevil Underwood and Pegasus together? No? Well, too bad, because that’s essentially Kishida in a nutshell.

He uses a bug-based deck, he tries to act smarter than he is, he has glasses, long, flowy silver hair and a posh accent that you’re most certain is fake.

But enough about Maxivil Pegawood, we got a tournament to prep for!

This show does a great job at handling TCG plotlines in a manner that’s both exciting yet realistic at the same time. Morikawa, thinking he’s hot shit, is eager to enter and claim his crown. Aichi, however, is uncertain, which is understandable given his personality and experience so far. I’d say he’s at a month or so of experience at this point.

Even when he gets to the card shop, he finds that plenty of other customers have similar doubts, especially when they hear of who will be entering, and this is before Kai puts his hat into the ring.

It’s subtle, but it’s realistic and very relatable, which is a massive difference when compared to other shounen gaming anime where situations like this would be blown ridiculously out of proportion – like completely over the top tournament announcements, every single player thinking they’re so awesome that there’s no way they’d lose, signing up actually requiring some sort of pre-requisite ‘are you worthy?’ test, including some ridiculous puzzle you have to solve before the end and every step of the tournament being played out like it’s life or death (or the end of the world).

This is a simple local tournament at a small card shop. Cheap posters and fliers were made, signing up was literally just signing up, people had doubts in their abilities and avoided signing up, and in the end this is just a low-key tournament where players are having fun. There are egos, sure – Kishida has this in spades – but it’s realistic.

Now that I’m older, I find more appeal in these toned down gaming shows. I get that explosions and high stakes keep the brains of the children focused on the TV box and buying more toys, but something that always bothered me about playing the real game based on the show game was that it was always disappointing. Even though I got very invested in playing Yu-Gi-Oh, and still play frequently to this day – though most of it’s on Duel Links – it’s still not all that exciting when compared to the insane stuff you’ll see on the show.

I got a Duel Disk for Christmas one year and felt really cool for about ten minutes, but then I kinda felt like a dork, especially since no one else I knew had one and playing the game on it is a bit of a nightmare from hell. Who the frick can get a regulation sized deck, into that deck holder slot? The damn plastic piece meant to hold in the cards is so rigid and the space is so small you’d think the creators never realized that a regulation deck holds, at minimum, 40 cards. And if you do get a deck in there, you’ll probably ruin a few cards as you draw them. And god forbid if you have more that 40 cards.

However, I believe if I ever played Vanguard, I’d be very content with it because I imagine it’s a very similar experience to playing it on the show. You can exaggerate and pump things up without resorting to magic, evil cults, alternate dimensions and–

That being said, Aichi’s obsession with Kai is getting a bit out of hand. I get that Kai is a measuring stick of progress – a rival to work towards defeating – I also realize that this is a great opportunity for Aichi to battle Kai when he said in the previous episode that Aichi was too weak to challenge a second time. However, he is always asking about Kai, thinking about him, wondering where he is and what he’s doing. And all Kai does is treat him like crap.

There’s an underlying sense of respect or friendship there, but he does treat him terribly. It’s a little awkward sometimes.

While I have been complaining about Aichi’s losing streak, it’s very obvious that the streak ends with this episode. I doubt they’d have a tournament arc where their main character is not a participant, especially since he got all revved up for Kai and considering his opponent is a pompous douche.

I was very happy when he finally won, and the genuine look of delight on Aichi’s face was, quite frankly, adorable. I was a little uneasy about Kishida pulling one of those infamous antagonist 180s where he’s a jerk the whole time and then becomes nice after the battle’s over. I get that, in the writer’s logic, he has no reason to puff up his chest and try to intimidate anyone anymore, nor would it work after a loss, but I think, realistically, people don’t change that drastically that quickly. It’s whiplash character development.

Next time, the Card Capital Tournament is underway and Aichi’s first match is against Izaki.