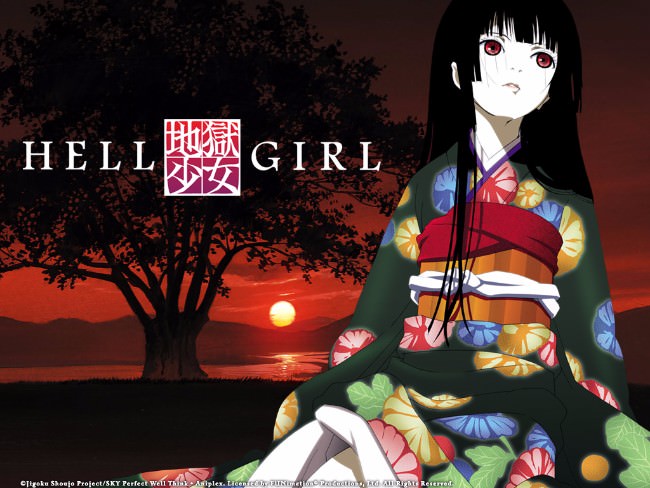 Plot: No matter how much we may want to believe otherwise, our world is not just. Good people suffer from the hands of the wicked and the wicked hardly ever seem to get punished. Luckily, this is a world where the phrase ‘go to hell’ can be a legit threat.

There’s a mysterious website out there that is only visible under two conditions – it has to be exactly midnight and the person accessing the website has to have a strong desire for vengeance against a specific person. When accessed, the person need only to enter the name of their tormentor into the website and a girl named Ai will appear before them. She gives them a straw doll with a red string tied around its neck and tells them that they only need to pull the string from the doll to send their tormentor straight into the depths of hell.

However, there is a catch.

With the pull of that string, the client will also be damned to hell for all eternity. The only difference is that they won’t be sent there instantly like the target. They get to live out whatever lifespan they had left before they go to hell. Jigoku Shoujo showcases an anthology of the various clients for the Hell Correspondence.

Breakdown: I love anthologies, especially horror anthologies. I really enjoy short little stories that you can always quickly relay to a friend and get a good scare in. Jigoku Shoujo or Hell Girl isn’t….quite a horror anthology, but I love it either way.

The only ‘horror’ aspects of this show are when Ai and her associates, Wanyuudou, Ren and Hone Onna are summoned to drag their target to hell and spend some time screwing with the heads of the targets before finally ferrying them to hell.

In a certain regard, there can also be horrors seen in the stories leading up to the summoning of Ai and her colleagues. The people who are usually Ai’s clients are obviously being tormented by someone for some reason and desperately want them to pay for their crimes against them. These can range from petty crimes to downright evil acts.

Many of the stories do a pretty good job at making you hate or extremely dislike the target in question, which is really necessary here because you don’t really want to see good people damned to hell.

However, there is the lingering thought in your head that you actually are seeing good people being sent to hell in every episode, only not right now.

That is the tragic part of this series. You root for the bad guy to go down to the fiery pit, indulging yourself in a bit of poetic justice, but, in the end, the client, who is usually a good person in a horrible situation, is branded with a mark that means that they will go to hell when they die, which adds a bittersweet tinge to almost every ending.

Sure, they get to live out whatever life span they were meant to have, but they still know they’re headed for hell when the day comes. I don’t see how anyone can live their lives knowing the fate that will befall them when they die, but then again if you knew that this time you have in life was the only time you’d get to ever experience happiness, I guess I’d try my best to make the most out of it too.

That’s not to say that every client is good and every target is bad. While most of the series focuses on this arrangement, they do make a point near the end to show that even people who are seemingly innocent and kind can be targeted and people who are dicks can be clients.

We’ll have to wait until season two to get more gray area cases, but even cases that seem cut and dry can be questionable.

As far as the stories go, most of them are well written and serve their purposes toward the plot very well. However, as with most anthologies, not all of the stories are gems and a couple of them border on horrible.

In addition, this also has a negative against it that most other anthologies don’t – there’s an air of predictability in every episode. Client is being tormented in one way or another by someone, they get pissed, hear the rumor of the website for Hell Correspondence and they decide to try it. By the commercial break, they’ll have met Ai and gotten the doll and they’ll spend a good chunk of the second half relegating on whether or not they should pull the string, which is fully understandable because it is a huge decision.

They’ll change some things every now and then to add some spice to the formula, particularly when we’re introduced to Tsugumi and Hajime Shibata, who try to foil Hell Girl, but for the most part every episode follows that structure. That’s not necessarily bad considering that you’re really watching for that sweet sweet justice courtesy of hell, which has some really cool and creepy visuals usually, but some people may get tired of it.

We do eventually delve into Ai’s story of how she became Hell Girl near the end of the series. It’s an interesting and tragic story that weaves itself quite well with the stories of Hajime and Tsugumi.

Art and Animation: The art is very stylized and works very well with the tone. The visuals during the revenge parts can be very creepy and creative. I especially like Ai’s character design. It is crisp and creepy without trying to go into the area of grotesque, which I applaud them for.

Studio Deen has several terribly animated episodes with some really odd art sometimes, but I actually think this is one of their better series. While they do get away with several instances of recycled shots, mostly in the preparation of Ai to ferry a soul to hell, there aren’t too many episodes that I would call bad in the area of animation.

Music: The music is great. The BG music sets the mood really well, though some tracks do grate on the nerves as we reach the final episodes. I love the OP and ED. The ED in particular is haunting and beautifully melancholy.

Voice Acting: English Dub – The dub, done by Animax, but currently licensed by Funimation, is really well done. Everyone was extremely fitting in their roles, particularly Brina Palencia as Ai and John Burgmeier as Hajime. Some one-off characters might have been iffy, but I can’t recall any that stand out as being especially bad.

Bottom Line: If you like anthologies, horror visuals and seeing a good dose of poetic justice against assholes, this is a great series to check out. There are three other series in the Jigoku Shoujo collection in addition to this that I will be reviewing in the future as well. The premise may put some people off as it sounds silly that you can damn people to hell through a website, but it is more complicated than that, and the website is really just a channel to contact them. The actual website itself is not involved in any horror shenanigans.

While much of the series stays in a black and white phase of morality, the last handful of episodes tackle morality as the much more complex topic that it is.

Additional Information and Notes: Hell Girl/Jigoku Shoujo was directed by Takahiro Omori, who also directed Koi Kaze, Baccano! and Durarara!! It was written by Hiroshi Watanabe, who also did directorial, storyboard and animation work for the sequels, Hell Girl: Two Mirrors and Three Vessels as well as many Slayer entries and Video Girl Ai. It was produced by Studio Deen and is currently licensed in the US by Funimation.

Recommended Audience: Some of the stories can get into some really messed up territories including but not limited to horrible animal abuse, especially in one episode called Bound Girl, child abuse and murder. There’s no actual nudity, but there are slight shots of nude bodies that are shot in ways that you can’t see anything.

The subject matter in and within itself can make anyone uneasy to begin with considering the ability to send a person to hell based simply on whether or not they’re pissed off enough at you. While this mostly applies to extremely bad people, it’s still possible for dolls to end up in the wrong hands.

She’s not a champion of justice, she just offers this favor to anyone with enough vengeance in their hearts. Plus, the revenge scenes can sometimes get pretty unnerving. There are some allusions to sex and mild swearing. 15+

Final Notes: I have done an episode by episode review of this series. You can find the link to the archive here.